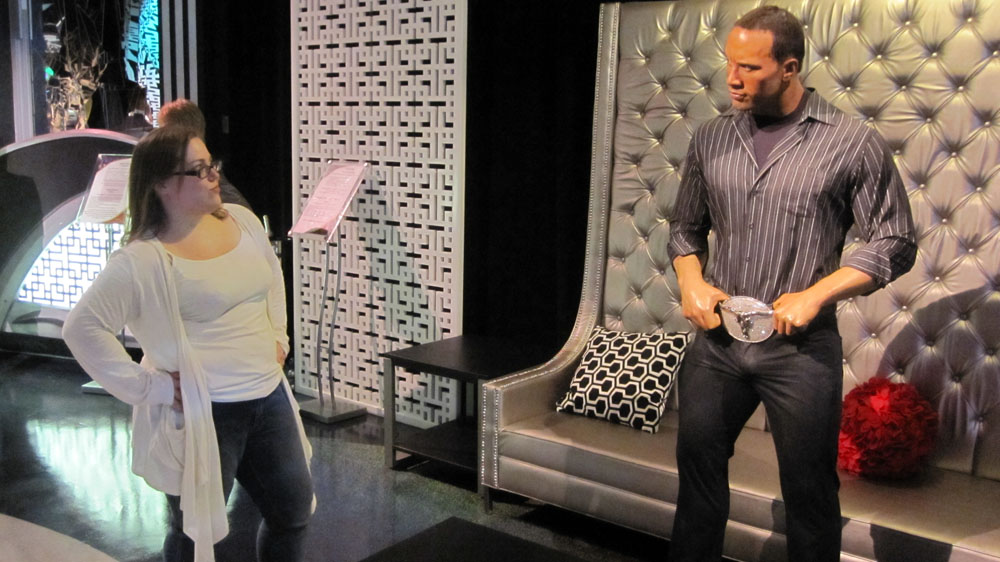 On our last day in Vegas, I insisted that we go to Madame Tussauds as I’d already purchased the tickets and didn’t want them to go to waste, plus I’d heard that it was fun to pose with the various figures. …it was actually pretty creepy. I’d see one facing my direction out of the corner of an eye, and it would startle me. Looking directly into those dead, blank eyes was even more disturbing. I suppose it doesn’t help that I don’t really have a celebrity-boner for any of these people so it’s hard to get excited about interacting with wax figures of people I’m ambivalent about. We had what fun we could, regardless. Would we go back? No. 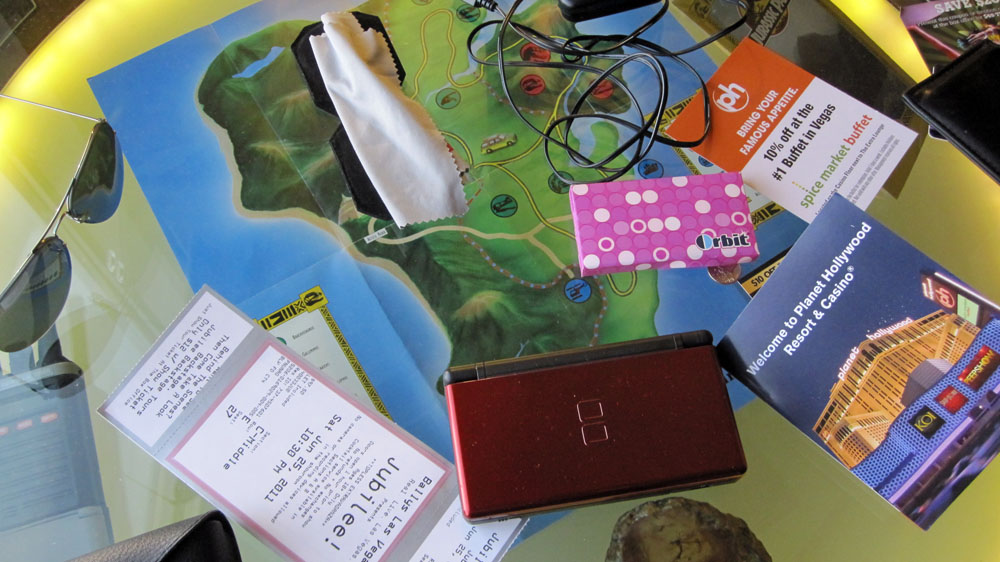 Upon our arrival in Vegas, Bill picked us up and let us stash our things at his room at the Wynn, as we could not check in at Planet Hollywood for several hours. After seeing the swanky accommodations at the Wynn, we were initially concerned that our room would feel like a dank pit by comparison, but all worries were forgotten upon the discovery that our room was crammed full of Jurassic Park memorabilia, because there’s nothing like a velociraptor sweetly watching over one’s slumber. As Saturday was our only entirely self-directed day with zero wedding obligations, we decided to spend the afternoon in a leisurely fashion at our respective pools, meet up in the evening to have dinner at the Wynn buffet and then take in a show. As it was over one hundred degrees outside, the time in the pool was especially refreshing, and I even spent a bit of time sunbathing afterward since summer had not yet arrived in Seattle and my body was starved for some vitamin D. All too soon, it was time to meet up for dinner. The Wynn buffet was reputed to be one of Vegas’ best buffets, but as, shall we say, buffet connoisseurs, we were all disappointed. What was there tasted fine, but it was underwhelming in size and variety. For the money, I think any of us would pick a rodizio meal over this starch-stravaganza. After dinner, it was time to attend Don Arden’s “Jubilee”, the 28-year old classic and supposedly last authentic showgirl revue in the city. My expectations of the show may have been colored by seeing “Showgirls” more than a handful of times, but we all left the show not quite knowing what to think of it. The sets were elaborate and amazing, the costumes were impressive, the performers were undeniably beautiful, and yet the show never rose above the mediocre. In my opinion, the show suffered from not knowing what it wanted to be. At times, it felt as though I were watching one of those interminably boring beauty pageant song-and-dance numbers, only with boobs. A portion of the show, detailing the story of Samson and Delilah, was enthrallingly well-done, and had the entire show been at that standard of quality, I would have been entirely pleased. The show started to sink right about the time they did a segment on the Titanic, after which it could not recapture my attention after losing it so thoroughly. Lesson learned: “classic” does not always imply “good”. 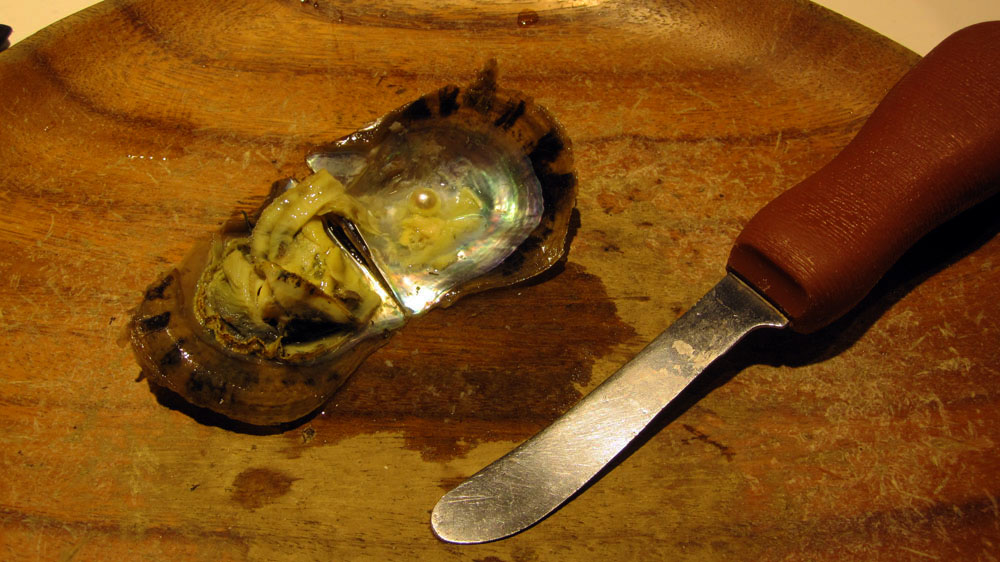 On Sunday, the boys got all suited up in anticipation of a swanky bachelor party at Treasures. I debated going with them, but ultimately decided that they’d have more fun without someone’s watchdog nanny girlfriend presiding over them while they have boobies rubbed in their faces, and besides, I was entirely too full to enjoy a $95 steak. And at $95, I would feel price-tag-compelled to cram every last morsel down my throat whether it’s delicious or full of gristle. And I already looked gut-tacular in my clubgoing dress (note: ruching is not a technique that works for every fat girl. I am one of the fat girls on whom it just emphasizes the “gunt” area, which is just about as attractive as it sounds.) and the addition of an entire $95 steak would have just exacerbated the issue. So instead, I got changed into something a bit street-and-fat-friendlier and merrily skipped along the Strip to spend Jason’s money. The first place I stopped was The Pearl Factory, in the Miracle Mile shops next to our hotel. I’d spotted the place on the way in, and its siren song had been luring me the whole weekend. At The Pearl Factory, for fifteen bucks, you can crack open an oyster and keep the pearl inside. It’s like a surprise present! I like surprises. And presents. Seeing The Pearl Factory also dredged up a vague memory of my mom doing something similar on a family vacation to Florida; namely, she cracked open an oyster and immediately the sales staff would not allow her to keep the pearl because it was special in some way. I think it was a special colored pearl and wasn’t supposed to have ended up in the “you choose” bucket, and I remember both of my parents arguing with the staff that they’d made a deal and couldn’t renege, but I don’t recall the outcome. I’ve since queried both my parents and my brother on the topic and none of them remember what happened though they, too, vaguely remember the incident. My mom says she definitely doesn’t have the pearl, but other than that? No idea. It’s amazing how a visual cue brought up a memory of something I had completely forgotten/stored away for something like twenty years; what else is hidden down there? Secret formulas? Directions to hidden treasure? My checking account number? At the Pearl Factory, you choose the oyster you’d like to have cracked open: the uglier the oyster, the better the pearl, or so I’ve been told. I picked out what I felt was the ugliest of the bunch, though beauty is so subjective, and the woman running the stand tapped on the shell three times, we cried aloud “ALOHA!” and she then wrenched it open to reveal my pearl. After The Pearl Factory, I made my way to the Forum Shops in Caesar’s Palace as they have both a MAC Pro store and an Inglot store. Because while I need more makeup like I need a hole in the head, honey, I deserved it. I tired of shopping sooner than anyone might have ever guessed, and since the plan was to go as a group to Gameworks when the strip club portion of the evening was complete, I decided to go to Treasure Island and wait for the boys to get back, while having a cocktail. One cocktail turned into a few, which turned into me making fast friends with some strangers at the next table who were in town for a poker tournament, which turned into me hanging out with them at a different, outdoor bar at Treasure Island (where I had the tastiest strawberry mojito of my life), which turned into one more drink which turned me into quite an exuberant drunk. It was at this precise moment that the boys arrived and informed me I’d made the right decision as the forty-five year old strippers were like used car salespeople, but for boobs, and the whole escapade was slightly less fun than a barrel of monkeys. Rather, less fun than the barrel of monkeys GAME, which no one has ever had any fun playing, ever. They also announced that it was far too late to go to Gameworks, and we’d all be going our respective ways until the wedding the next day, giving me less time to sober up than I’d anticipated. On our walk back, I succumbed to my natural urge to ride all things outside the Mirage by climbing aboard a cement lion. I dare you to look at this picture without hearing a “WOOOOO!” in your head. Dare you. I woke up several times during the night, and each time, I was still drunk. As the sun came up, I became so very, very sick. Honey, I deserved it.