This weekend, Jason brought home a copy of The Gunstringer, borrowed from a co-worker. I had not really heard anything about it (let’s face it, I’m out of the loop game-wise as I find game websites annoying, and conventions like PAX are essentially one of the deepest pits of Hell, as far as I’m concerned. Stinky AND crowded? Wait in line for anything and everything? Near-riots for t-shirts and anything else being given away for free? Dudes cutting in front of me in line to play a game because my vagina makes me invisible? Oh boy, when does the fun start!? Can you believe I PAID to get in here?!!?) except for a marketing email from Microsoft, which immediately rendered me suspicious. Microsoft does a poor job marketing games to their consumers, especially with the wealth of information they have. Yes, I have a Kinect, and you can see I’ve spent a lot of time playing Dance Central–that does NOT mean I’m the target market for Kinect Sports. You can see my game library, Microsoft. I don’t own any sports games, so odds are I’m not a fan of the genre, even if I enjoy dancing around like an asshole in the game room. The marketing email for The Gunstringer told me the game has:

That’s it. Essentially this marketing email told me that there was nothing to tell me about this game. In fact, one of the only selling points they found for it was that it includes a DIFFERENT game. When people whose entire job revolves around making consumers want a product can’t find a single thing to say, it conveys an extremely negative impression. So my overall hopes for the game weren’t high.

Then we played it. I was immediately charmed: by the premise, by the narration, by the art direction. You play as a marionette (who is unaware that he is a marionette), out for revenge against his former posse who wronged him–and each act of his revenge is part of a play viewed by an audience, who cheers your successes and boos your failures. As such, each level is constructed to look like a set full of props–trees are made of corrugated cardboard, paper towel tubes, and lincoln logs, cattle are beercans with horns, and your trusty steed is a pushpin with a felt head and yarn hair.

The story was well-written and very funny; Jason and I cracked up laughing a number of times while playing. The end of the story was executed very cleverly, and left us howling with laughter. The narration, like recognizing prop materials, served to increase the feeling that you’re performing in a play, unlike the narration in Bastion, which I found annoying.

The control scheme generally feels natural. I felt the Kinect recognized our movements better while standing than while seated, however, and those who have arranged their living rooms to have enough playspace for dancing and sports games may find that the Kinect cannot see them at all when they’re back on the couch. Navigating menus was a bit wonky, especially in the bonus store section–you need to hover your hand over an item to read the description, but hovering also initiates purchase, so it’s hard to see what something is before you buy it. Granted, players will usually end up buying most everything eventually regardless, but since players are offered their choice, it would be better if the game more easily facilitated making discerning choices.

Overall, I really enjoyed playing The Gunstringer–its humor and style has led me to seek out other titles by Twisted Pixel, and I’ll more than likely acquire a copy for myself in order to do another playthrough on hardcore mode. Gunstringer is proof that fun games CAN be made for Kinect, and in my opinion, MS did this game a huge disservice by trying to sell it as the same old crap. This game made me like a PUPPET, and that is damn remarkable. 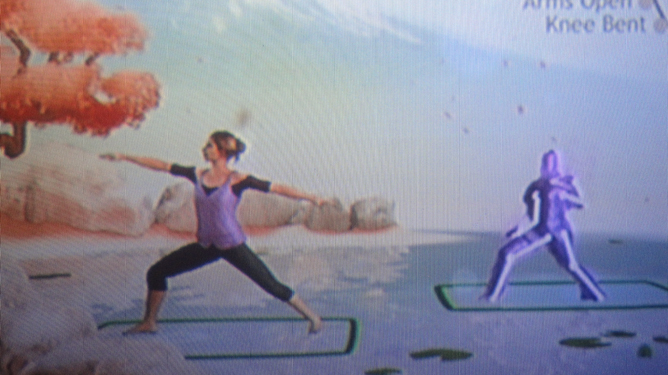 I’ve long been a proponent of at-home fitness activities; the reasoning being that if you have to travel somewhere to work out, if it’s anything less than perfectly easy and convenient, you won’t do it consistently. I’ve enjoyed workouts like Turbo Jam and Chalene Extreme, which encourage me to jump and punch and kick without worrying how I look in front of a class of fit people and lift weights without some bulging dude grunting like a rhinoceros directly behind me, respectively. But with DVD workouts, you aren’t getting any feedback, unless your partner is sitting behind you on the couch, eating oreos and helpfully pointing out that you aren’t squatting low enough. Thus is the appeal of a game workout like Your Shape: Fitness Evolved–the Kinect sees your movements and can correct your form.

That is, if it worked properly. Apparently no one on the team of Your Shape has ever seen a fat or a short person, much less a short fat person, and my experience with the game was nothing short of extraordinarily frustrating. Supposedly, the program scans your body at the outset to determine arm and leg length, and to automatically sign you in, but even though I wear the same workout clothes and have my hair the same way nearly every time I play, the game has never once recognized me. My frustrations began with the personal trainer program. Like I’ve indicated above, this is not my first aerobics rodeo mimicking the movements of an instructor, so it’s annoying and frustrating to move exactly on beat, following the trainer precisely, and yet be punished by the game for being “out of rhythm”, during which your calorie count does not change even though you are performing the activity. Sometimes the game will indicate that I am in and out of rhythm six times over the course of one move, though my movements are indistinguishable from those of the onscreen trainer. With every move, I am berated to “move my legs farther apart”, and even when I widen my stance much more than the trainer, to the point of having to hop from foot to foot to perform the move, I am still instructed to widen my stance. Other times, I will be told not to raise my arms so high, so I will lower them a little, and then immediately be told to keep my arms up. The trainer will then helpfully repeat these useless suggestions at the end of each exercise, in case you didn’t hear them the first six or seven times. It’s here that the calorie counter really falls short, as having a she-hulk nuclear meltdown tantrum on the floor due to 6 contradictory corrections in the course of ten seconds burns way more calories than a simple step-touch.

When you aren’t being told to correct your form one way and then corrected the opposite way immediately afterward, the space in between is filled with “good!” “that’s right!” “you’ve got it!” “keep up the good work!” “you’re doing great!” “that’s it!” “That should feel much better”, one right after another. If the virtual trainer were a person, her friends and relatives would all tell you that she just likes to hear herself talk. It is incredibly annoying and distracting and there’s no way to turn it off. That’s right, I came to the game looking for feedback, but now that I’ve got an earful, I’d pay extra to disable it, since I’m getting nothing beneficial from it and it’s actively detracting from my experience.

In the fitness classes portion of the game, they have two different classes you can take: Cardio Boxing, and Zen, though they helpfully include all of the other workouts you can purchase for more money onscreen, as apparently the sixty dollars you paid for a workout game was merely enough to pay for the framework of the game and the workouts themselves have to be purchased piecemeal. The cardio boxing class is a joke. I’ve given myself a higher heart rate carrying in my sack of fast food from the car to the couch than I have during any portion of this “cardio” workout, even in the advanced classes. Now, I may be used to Turbo Jam’s style of cardio boxing, where after a workout, I can squeeze buckets of sweat out of my clothes, but then again, this is a workout game. Shouldn’t I expect a workout?

The zen portion of the fitness classes is equally useless. Since I’m a fatty mcfatass, and once again, the team has clearly never met a fat person before, the game has some interesting ideas about where my bones are located. The knee bone’s connected to the thigh bone, which goes somewhere up through my uterus and into the other leg. The second leg’s bone has decided to travel up into my butt, which is most DEFINITELY not where it resides within my body. In nearly every instance it places a bone, it will be along the side of a muscle/fat heavy area instead of where the bone anatomically belongs. There have been instances where the bone will sink into the floor or curve or snap in half, which means I NEVER get any useful feedback about how to position my body and I get no credit for doing the moves which means at the end of the session I get a sadface “Let’s try this again” message. Because if there’s anything more fun than frustration, it’s double doses of frustration!

I wish I had purchased a physical copy of this game so I could trade it in and at least get something back; instead, I bought it from the xbox live marketplace for the same amount of money, and now I’m stuck with it. Even if I could bring myself to play it, it can’t ever replace a gym workout. Hell, it can’t even replace my workout DVDs. Helpful.