I love playing WoW, but there are seriously some parts of it that are so terrible. On my server, there are people who sit in trade all day and talk about rape, say fucked-up racist shit, rant about politics and the n-word president, and are generally just awful examples of humanity all around. I’ve got an ignore list as long as my arm. Unfortunately, the same guys just keep turning up so I guess blocks are not permanent or they keep rerolling with very similar names. And then you’ve got the guys who will follow your low level characters across an entire zone, killing them instantly every time they resurrect and struggle to get away until you log out in frustration…and sometimes they’re still there the next day. And the day after that, because they have dedicated their shitty little lives to griefing. These people deserve one another. Decent players don’t. Please, Blizzard, give us the Poopstain Debuff. 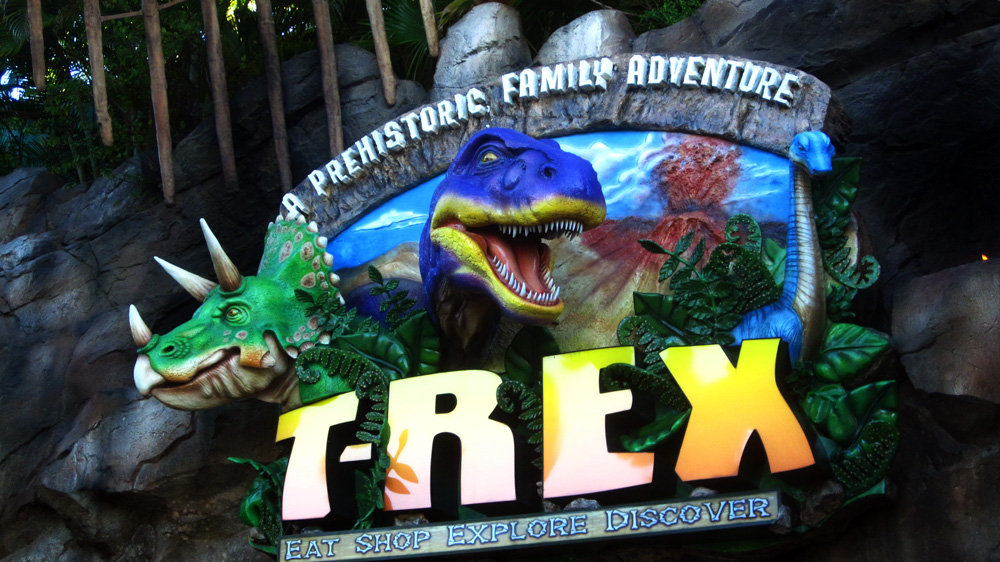 The T-Rex Cafe is operated by the same company that owns The Rainforest Cafe, so if you’ve been to the latter, you know the schtick, except in this restaurant, they have a bunch of animatronic dinosaurs and there’s a meteor shower every twenty minutes instead of a thunderstorm. They also don’t seem to operate with the same slogan as The Rainforest Cafe, “Fun until it isn’t,” because our food was actually pretty damn good, lacked any sort of embedded hair, and they even had cocktails made with cotton candy which made Jason extremely happy. Actually, the restaurant is quite similar to Jurassic Fork; they don’t let you order your meat “medium roar” at The T-Rex Cafe, either. Luckily, they also don’t have any rules about feeding a hungry animatronic stegosaurus an onion ring so long as no one sees you do it. One day, Jason thought it might be nice to see Cloudy with a Chance of Meatballs 2 at Downtown Disney. I don’t want to point fingers, but this was, hands down, the worst idea he’s ever had. After we paid for our tickets and went into the theater, a herd of the world’s noisiest children flooded in and sat directly behind us, kicking our seats, screaming about whether they should get popcorn or nachos, arguing about the trailers, and doing everything in their power to drive me goddamn insane. We didn’t even make it to the movie proper before getting up and asking for a refund, which we were given without so much as an “I told you so” from the theater employee.  I was confused at this level of restraint and politeness from a Disney employee; one of the only things I remember from my family’s trip to Disney World when I was 11 is an altercation at Epcot Center. We’d stopped in the France Pavillion to split an eclair. All they had to drink was whole milk, and we were used to drinking skim, so my mom asked if they had any skim, to which the employee replied “You’re all already fat, what does it matter?” Very few things can put me off an eclair, but that’s one of them, even if that surly French teenager had a point. These are some next-level candy apples. I can’t even get the caramel to stick to the damn apple!

Every evening we visited Downtown Disney over the course of our stay, they had live music in the streets, which definitely added to the overall festive atmosphere. Among the more entertaining performers was Dominic Gaudious, a guy who plays a double-neck didgeridoo and a double-neck guitar. I’m always impressed by didgeridoos, as my mom used to have one hanging on the wall and about the only thing I ever managed to make it do was slowly dribble my spit out the other end. We spent the better part of another day at the DisneyQuest Indoor Interactive Theme Park, relishing in both its air conditioning and the unlimited play games. Their virtual reality games were terrible, with graphics, headsets, and controls straight out of the early 90s, and neither one of us could handle them for more than a minute or two. I made it all the way through Aladdin’s Magic Carpet Ride, but Ride The Comix was so horrendous that I ripped off my dorky helmet and walked out in the middle. Sorry teammates, but my laser sword didn’t work anyway, so it’s not like I could have helped you regardless.   Literally everything else was much more fun. They had a classic games area, a pinball machine room, skeeball, air hockey, a bunch of music game machines, even a bank of playable Fix It Felix from Wreck It Ralph! My personal favorite was a driving game I’d never seen before called “Dirty Drivin'” which involves some of my very favorite things: revenge, explosions, and customization. It would probably lose something in translation from arcade to console game with the loss of the steering wheel/gas pedal/revenge crank controls, but I would still buy it in a second. I would pay full price. What I can’t pay is $7700 for an arcade machine. $15,000 if I ever want to play with another human being. Please port it!

No, seriously, port it. Or my buddy Ralph and I are going to wreck you. 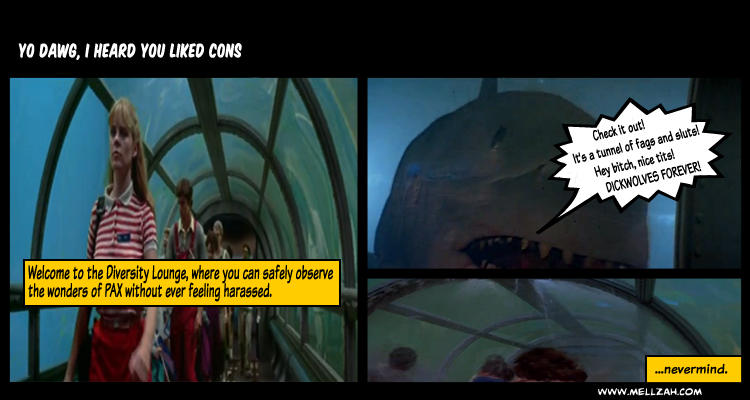 This year at PAX, to deal with their PR problem, they’re adding a “Diversity Lounge”–a safe space where congoers who feel marginalized can go and congregate with the likeminded to talk about issues of diversity within gaming; a con within a con.

Diversity doesn’t just exist in a bubble, though. The solution for people feeling unsafe at the convention can’t be the removal of the people who feel threatened, that’s just further segregating and alienating the marginalized. Marginalized congoers don’t only want to talk about the lack of diversity in the industry, they want to experience the whole con. That’s the whole reason they decided to attend a gaming show like PAX in the first place. They want to walk the floor, play the games, and attend panels like everyone else. All they’re asking is to attend panels without one of the con heads saying he regrets pulling merchandise that poked fun at rape victims. They’re asking that the con management think twice before allowing panels that encourage the behavior of the lowest common denominator. You can’t create one small safe space and call the job done. You need to target the root of the problem to make the con safe and enjoyable for everyone. Granted, you’ll never be able to prevent all negative instances from occurring, like that one time I ran into a former classmate on the show floor who back in the day was quite vocal about his notion that he felt I owed him a blowjob for being female and in his vicinity, but you can at least TRY to implement working safe space policies that apply to the entire convention.

Unless the Diversity Lounge serves drinks. Then I’m all in.