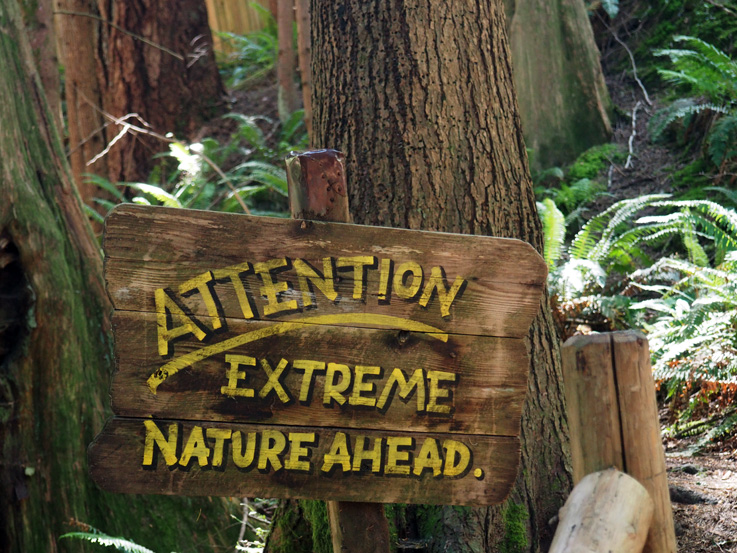 Temperate rainforests are located in only a few regions around the world; they’re characterized by high annual rainfall and the ability to generate new growth without relying on fires. The largest area of temperate zone rainforest in the world is in the Pacific Northwest, stretching from northern California to Alaska. Located in north Vancouver, the Capilano Suspension Bridge Park takes you on an ecotour through part of this coastal rainforest, moving you from forest floor to canopy via a series of bridges and treehouses.

We decided to make a daytrip of it rather at the last minute, apparently because we both enjoy visiting Canada underprepared. As AT&T customers, we shut off our cell phones once we hit the border to avoid getting nailed with roaming fees, but as we’re both heavily reliant on phone GPS, we really should have a plan in place or a map in the car in case of necessary detours. Do as I say, not as I do. I printed out directions before we left, and the directions noted that one of the roads we were taking was a toll road. Toll roads are the bane of my existence, because it seems like there’s never any good information about where the stations are, what the rates are, and what form of payment they accept, or I am very poor at my internet search parameters when it comes to toll roads. I tried to look this up before we left, and was informed that there were only two tolls on that road, neither of which were near where we were going. It should therefore surprise you not at all to find out that there was indeed a toll almost immediately after we merged onto Highway 1, and zero information about how one could pay that toll, which left us scrambling for Canadian currency. We ended up at a convenience store on the outskirts of Surrey so we could withdraw cash from an ATM (which, to my delight, is a polymer that’s pleasingly see-through), made our way back to the highway, crossed the toll bridge, and discovered that you pay online. I have no regrets about being able to keep my see-through money, however. At the entrance of the park is an area that informs visitors of the history of the land and of the suspension bridge across the Capilano river, which was originally built in the late 1880s to connect the sections of forest George MacKay had purchased. It’s changed hands (and bridges) multiple times since then, and one of the owners also invited First Nations tribes to place their story poles at the park, so it now houses North America’s largest private collection of First Nations totem poles. The Capilano Suspension Bridge is a simple suspension footbridge in that it’s anchored at either end with no deck stiffening. The bridge’s main supports are the handrails with the deck suspended underneath, which makes the handrails sturdier but creates a lot more side to side motion on the deck itself. At 450 feet (137m) long, I can say to you with no reservation that each foot is more terrifying than the last. The bridge lurches sickeningly underfoot, rolling and pitching with your movements and those of everyone else crossing at the same time from opposite directions. We visited on a sunny and high-traffic day, and I’m certain this only amplified the effect. I felt as though I were fighting to keep my balance with every step, and after crossing it a second time (as you have no option but to return the way you came), I felt unsteady and nauseated for hours afterward. The handrails and side barriers make it virtually impossible to fall off, but high above the river on a wildly swaying bridge, you are keenly aware of your own mortality. Once you’ve crossed the bridge, there are a number of things to see and do. Immediately after you step off the bridge, there’s an outdoor exhibit that teaches visitors about the rainforest and how the park helps to keep it alive and thriving even with tourists moving through it daily. For instance, they stock their pond every year with around 800 rainbow trout, which provides a food source for otters, herons, and osprey. On Raptor Ridge, they have several birds of prey, along with two falconers available to answer questions. My first question had to do with the sign cautioning dog owners to keep away: had that been in issue in the past? As it turns out, it had. “People would bring their dogs right up to meet the birds, and some of the birds were…too interested in the dogs. Like Smaug, the female Harris hawk–she has no fear or sense of her size. She would try to take down a bear if given the opportunity.” The sign on the kestrel cage said that kestrels weigh as much as a quarter pounder with cheese, and I remarked that was an oddly specific unit of measurement. “That’s the female, for the male you’d have to subtract the bun and the pickles. But people are so health-conscious these days that we’ve been thinking about changing the sign to something a little less controversial.” I suggested a head of kale, but in retrospect, I think a cheeseburger is a perfect measurement unit for a raptor: meaty, exciting, and dangerous. Something leafy and floppy just doesn’t have the same effect. The Capilano Treetops Adventure starts off in a treehouse and continues on seven suspension bridges up into the canopy of old-growth Douglas fir trees. They’ve designed the structures with a compression system so that nothing is driven into the tree itself, which means that no harm comes to the tree and it can continue to grow naturally. In fact, their adjustable collars allow the attraction to grow upward with the trees! After we were done walking through the trees, we did the Natures’s Edge walk, which is a long boardwalk along the edge of the rainforest that gives you views of the suspension bridge and the Capilano river. Approximately every ten feet, there was a sign telling people not to graffiti the wood railings. People complied with this order and instead defaced nearly every single sign, indicating that either a lot of smartasses visit, or one smartass was particularly dedicated. Back on the other side of the suspension bridge is the new (as of 2012) Cliffwalk attraction, which consists of suspended walkways along the granite cliff faces. They sell this as the EXTREME (in the Mountain Dew sense of the word) part of the park, but honestly, I felt much safer on the Cliffwalk than on the suspension bridge or even the treetop adventure, as the Cliffwalk structures were firm underfoot. The only part that gave me pause was the portion in which you’re standing on glass, but that’s just because I have an inherent mistrust in the ability of glass to hold my fatassery, so your mileage may vary. Plus, I’m extra wary as I know that my role in life is to live as a warning to others, and I would really prefer that my epitaph not read “So fervently enjoyed the cheeseburger that no glass could hold her.” After you’ve visited all of the areas of the park and stamped your passport as proof that you braved the bridge, they give you an “I survived!” certificate which is suitable for framing and makes you feel like you really accomplished something other than walking around for a few hours. I’d like more certificates in my day-to-day life as affirmations that I’m awesome. “You haven’t let the house fall into utter disrepair!” or “You got groceries before letting the pantry get to the point that you’re forced to eat macaroni and cheese that’s been expired for a year!” or “You didn’t fake a headache in order to get out of your dentist visit!” But making the certificates and awarding them to myself is a little odd, plus awarding myself a certificate for making the awards certificate could result in an infinite loop where I just photoshop until I die. On your way out, you would be remiss if you didn’t give a Mountie that also happens to be a bear a low-five.