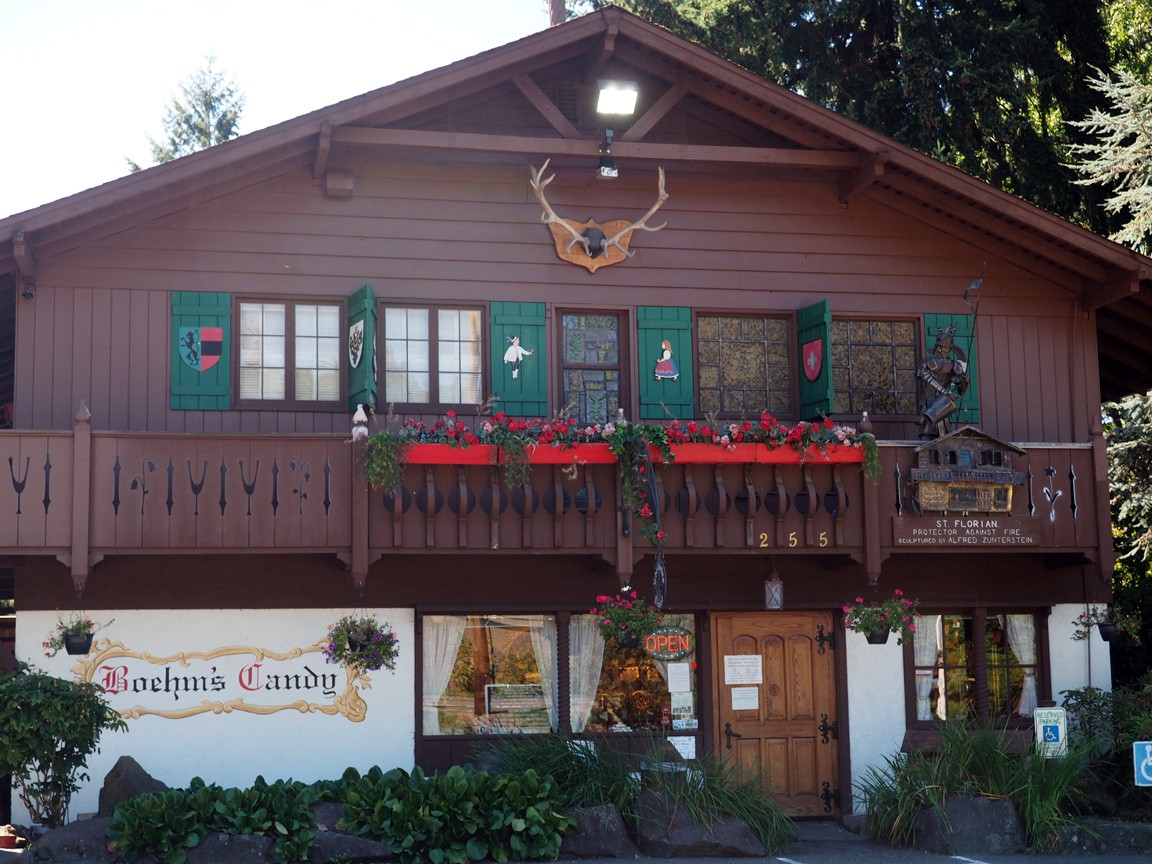 Boehm’s has been making chocolate confections in Issaquah, Washington since 1956, when founder Julius Boehm moved his operation there from Seattle as the surrounding mountains reminded him of his homeland. The Boehm’s website indicates that they give tours at the factory and through the chalet from June-September, Monday through Friday, at 10:30am, 1pm, and 2pm by reservation.

I made a reservation on said website for a 1pm tour for two people on a Thursday in September, indicating in the reservation form that they should call me if there are any issues with the reservation so I could make other arrangements. Imagine my surprise when both my friend and I arrived promptly at 12:55 and were rudely informed that there was no tour that day, that they only give tours through September. Apparently, neither their calendars nor their telephones work. We were then told we could take the window tour, which makes one feel like a starving Dickensian waif looking upon the riches of the gentry. “Please sir, I want some more!” Julius Boehm learned to make candy and pastries from his grandfather in Switzerland. He was an Olympic athlete and avid outdoorsman, who used his mountaineering skills to escape from the Nazis. Why were the Nazis after him specifically? Let’s say it’s because he built a life-size chocolate Hitler and bit its head off. I also like to imagine that there was a tense mountain chase scene, with Boehm skiing furiously across the Alps with the Nazis hot on his heels, throwing cherry cordials at them to make them lose their footing. Boehm remained an athlete until the day he died, becoming the oldest man to summit Mount Rainier at 75, and breaking his own record at 80. After moving to the United States, he started a candy shop in Seattle, eventually moving to Issaquah and building his own chalet, the first building of its style in the area. After he died, his friend and head cook took over the company. A sign helpfully informed us that this is a copper kettle. You don’t say! They use it to mix and heat stuff, “the ingredients” as the sign said, so I don’t actually know what goes in here. Let’s say witches’ brew. Some candies are completed in this kitchen area and others continue into the rest of the factory. I don’t think anything chocolate-related is done in this room, but again, I couldn’t say for certain. In this window, the sign pointed out that the employees were gloveless, but didn’t elaborate as to what is done to sanitize their hands. It also didn’t go into why they look so unhappy, but that may just be conjecture on my part. I can say that chocolate has never looked so unappetizing to me. The sign says that hand-dipping is a dying art (it takes a year of practice to master!), with fewer than 200 hand-dippers remaining in the United States today. Companies? Individuals? I’m going to go ahead and assume elves. Truffle and cream centers are rolled into long ropes, which are then pinched off, rolled, and then coated with chocolate. Once covered, the candy is placed on a tray to cool and a design is drawn on the top to identify its flavor. Is this the origin of the phrase “pinch a loaf”? I will venture to guess “yes”. Here is a molded chocolate turkey that looks like it could be thirty years old. They have other molds, from little crosses to giant dolphins that weigh 37 pounds. Are people who are in the market for 37 pounds of chocolate all dolphin fanatics? How much does a 37 pound chocolate dolphin cost? How does one eat a 37 pound piece of chocolate? My guesses are “yes”, “$600” and “while snuggling it in a hot tub, letting it melt into your mouth and your various nooks and crannies at the same time”. Then came a sign telling me that if I wanted to learn more, I could make an appointment for a scheduled tour and my head exploded. What in the hell is going on here? Epic dongs. And that’s the tour, folks! I hope you learned something: namely, to take the Theo tour instead.