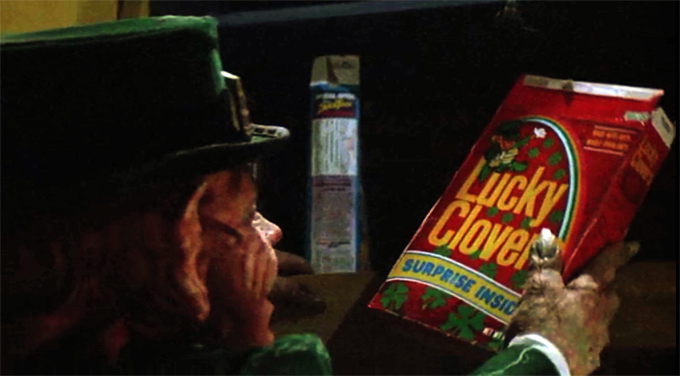 It blows my mind a little to think that I’ve been throwing parties on nearly every Friday the 13th for the last five years. For the most recent iteration, I invited people over to partake in corned beef, fauxtatoes, Irish cupcakes with three kinds of alcohol, and most importantly, the cult classic movie Leprechaun. Leprechaun, at its surface, is your typical “monster stalks and kills” movie, but it’s also so much more. It’s the story of a “monster” who was robbed of his property, wrongfully imprisoned for years, and his eventual release and his attempts to reacquire that which is his. It’s the story of a “monster” who can’t help but stop to clean a dirty shoe when he sees it, because he knows the importance of grooming and presentation. A “monster” who enjoys riding around in an array of tiny vehicles. I’m going to come right out and say it: the leprechaun is an antihero who got a bad edit.

Out of everyone in the story, the leprechaun’s intentions and goals are by far the clearest and most relatable. Don’t believe me? Your other options are: 1. A guy who went to Ireland to bury his mother and decided to go gold-hunting instead, shipping his treasures back in her urn, presumably having dumped her ashes somewhere along the way to make room 2. The woman who sees her husband holding a handful of gold coins and telling the story of how he got them, and deciding he’s just some goofball drunken liar despite the physical proof right in front of her 3. A man and a woman who appear to be in a winter-spring marriage situation except the old guy is taking his young wife to a filthy abandoned house in the country instead of, I don’t know, literally anywhere else, and the young wife is insufferably obnoxious with roving eyes and then later you find out they’re father and daughter which is even more strange because what are they even doing? 4. A paint crew dude with a sweet mullet and no personality save for making eyes at the daughter 5. A paint crew guy who appears to spend as much time eating paint as he does actually painting 6. The paint crew’s precocious little scamp kid sidekick who works with them? Or something? And they don’t mind when he hits them with slingshot debris and openly flouts labor laws? I don’t even know.

Actually, now that I look at that list of horrible people, I think I’m going to upgrade the leprechaun to full hero status. These people robbed him, trapped him in a crate, cut off his hand, poked out his eye, shot him repeatedly including in the face,  and he still polished their shoes and gave them so many chances to make things right. Sure, he does some light murdering, and a bit of mangling, but on the whole it’s mostly justifiable.

Man, I hope Warwick Davis has a stunt double.