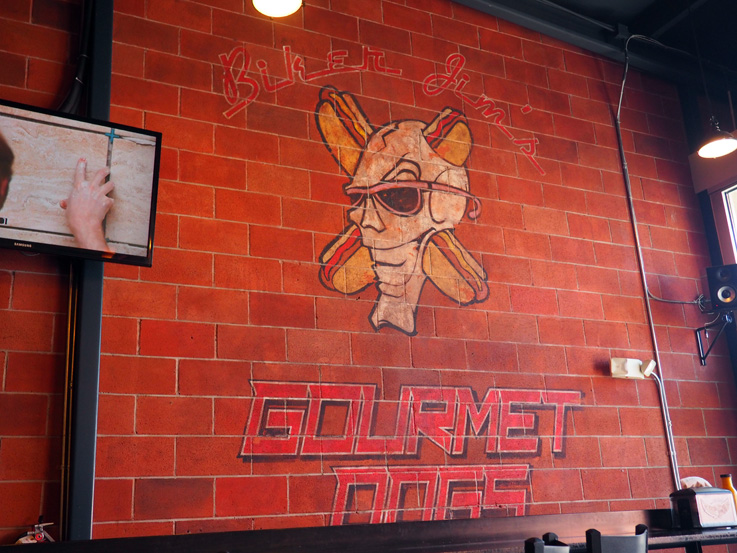 If you tell me a restaurant has a variety of exotic meat, I’ll make it a priority to eat there, and my visit to Denver was no exception, as I planned a meal at Biker Jim’s Gourmet Dogs.

Biker Jim’s started as a street cart and eventually expanded into a restaurant, and frankly (ahem), I can see why. They’ve got a number of exotic meat sausages on the menu as well as a standard beef dog, and I think the only miss is the duck cilantro if only because I wouldn’t cry if all cilantro was eradicated from the face of the Earth. Die, devil weed! But I will never say no to a fried pickle, so they have that going for them as well.

I decided on a reindeer sausage topped with “the conspiracy”: stilton bleu cheese, bacon red onion marmalade, lemon aioli, and french fried onions. Yes, I flew to Denver to get something shipped from Alaska. Shut up. Jason decided on the Jack-a-lope topped with cream cheese squeezed out from a caulking gun and coca-cola soaked caramelized onions. I took bites of both and they were excellent. The Jack-a-lope was sweet and spicy while being comforting and familiar. The reindeer had a more adventurous flavor profile with the slight gaminess of the sausage, the richness of the stilton bleu being cut by the slight tart of the lemon aioli, with the crunch of the onions adding an excellent texture and the sweetness of the marmalade lingering on the palate. If I didn’t have to save room for another exotic meat adventure later, I would have liked to have tried more. Should I find myself in the Denver area again, I’d definitely go back.