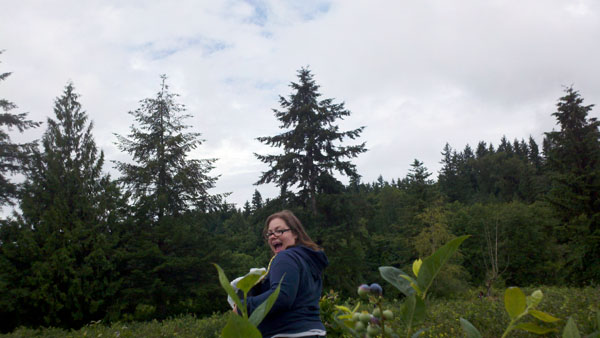 Even though days that feel like summer in the Pacific Northwest have been fleeting, it’s still harvest time for blueberries. Last weekend, Jason and I found ourselves at the Henna Blueberry Farm as their blueberry season starts a week or two earlier than other farms–the reason being that they are protected from some of the rain by a large nearby hill, so they ripen faster. At the end of our vigorous picking endeavors, we found ourselves with nearly 10 pounds of blueberries, which, if that sounds like a lot, is in reality even more than that. Most of them are destined for the freezer, for the the times of year when blueberries are out of season and ridiculously expensive, but in the meanwhile, we’ve been eating blueberries on cereal, blueberries with lunch, blueberries with dinner, blueberries as a snack…We’ve made blueberry sorbet, and I’ve even made a blueberry pie. This is a big deal for me, as I’m terrible at making pie. I’ve had crusts burn, fillings erupt like a volcano all over the oven bottom, crusts turn out rubbery and tasteless; what I’m saying is that pie is not my forte.

However, this time I was determined to do it right. After cutting the butter into cubes, I put it in the freezer for an hour. I iced my hands before handling the crust, and even then handled it as little as possible. Between steps, the crust rested in the fridge. This made the pie-making process much longer than I’m used to, but I’m also used to not wanting to eat the pie after I make it, so obviously the fast way wasn’t working. For a fun touch, I used my pirate toast stamp to vent the top. I also foiled the edges of the crust to prevent them from burning, and placed a parchment-lined pan beneath the pie in case of filling explosion. The foil pulled off some of the edge crust, so while it’s not a pretty pie, it IS a delicious one. The filling isn’t too sweet, it stays where it belongs when cut instead of slopping around, and the crust is flaky in a way I assumed no pie from my kitchen could ever be. Pie success! Now, if only I could learn how to make food look appetizing in a photograph instead of gross.

…Only 8 more pounds of blueberries to go.

Recipe can be found here.

See you in January!