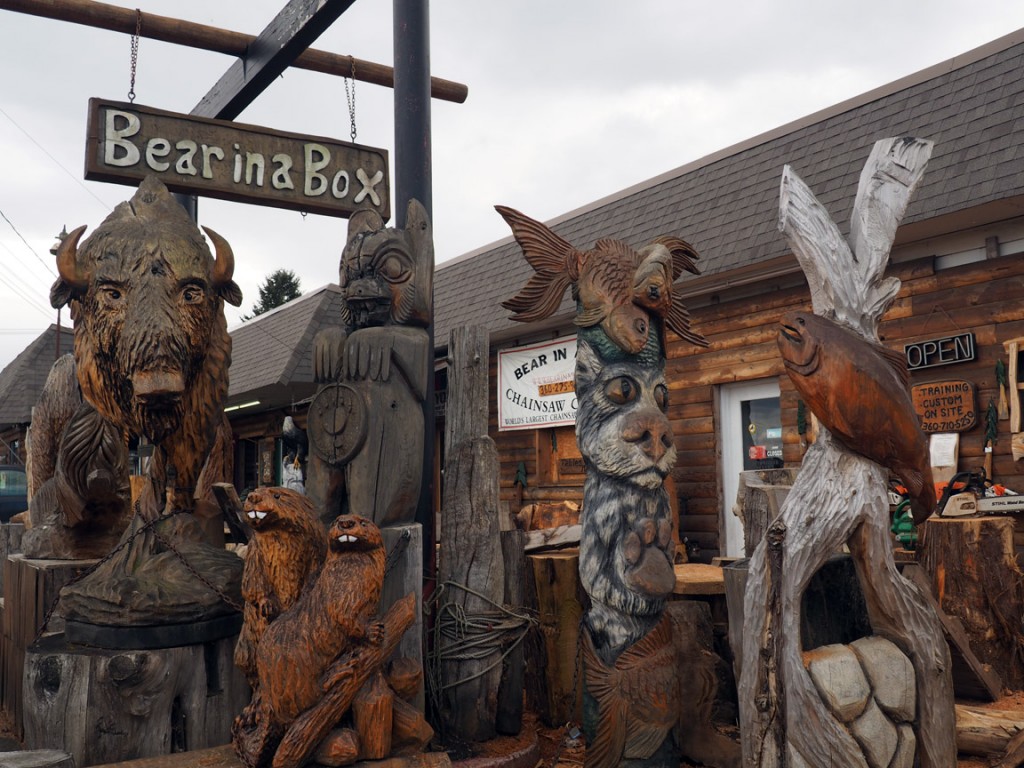 I heard there was a place in Allyn with a ton of chainsaw carvings, but I needed to see it to believe it. When we arrived at Bear in a Box, I still hardly believed it. The smell of freshly-cut cedar is hanging in the air, and there are so many carvings in different stages of completion, it’s hard to take them all in. When we remarked aloud at how great the air smelled, a man called from an elaborately-carved bench “At least you can smell it, I can’t anymore.” We made our way over and met Don Benson, one of the chainsaw artists. He started carving 8 years ago, and made the switch to full-time 6 years ago, carving and teaching classes at Bear in a Box. This year, he took fourth in the national competition in Yreka, CA, with the above carving. We learned that some carvings are done start to finish with saws, and some require a small amount of hand tools–a bit of sanding for a smooth beak, smaller tools for the smallest detail work. “Anyone can do this, there’s money in it. Start off with bears, people like bears.” “I think my bear would probably look like a turd with three legs.” “And people will buy it! When I started, I made these terrible eagles, people would come up to me and say ‘Man, that looks exactly like an eagle’ and I’d laugh because I’ve seen pictures of eagles and they looked nothing like an eagle. But they still sold. Get a saw!” “I don’t know, I’m a little clumsy…” “Don’t get a saw. You–you get a saw, don’t let her touch it.” Spotted on the Roadside: Kountry Korner’s Krazy Kreatures in Kingston

A Walk on Kalaloch Beach