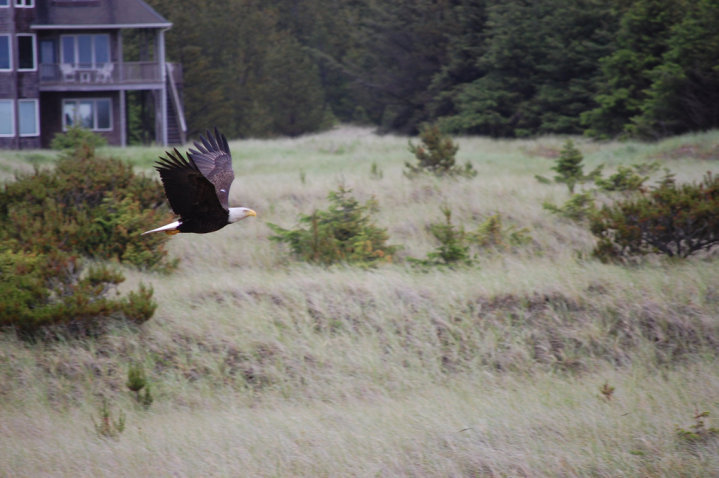 Unfortunately, given our shenanigans the evening prior, we had already behaved poorly enough to deserve the Cranberry Museum. And if we didn’t deserve it THEN, we (read: Evan and I) certainly deserved it after what we did Monday morning. Monday morning, Memorial Day proper, Emily sat up with a start and shouted ‘BALD EAGLE!’. She has a…rather contentious relationship with the eagles in Long Beach. Namely, she wants to photograph them, and they mostly don’t want to be photographed, by her in particular. So when she saw this eagle flying down to perch on the post marking the property line, she ran out to the beach with her camera, still in her pajamas, clutching her waistband so her pants wouldn’t fall down in her excited rush. I decided that it would be prime time for a marshmallow gun ambush. I swear that if this photo extended to the left just a bit further, you would see me standing in the window, plotting. Evan and I crept downstairs and outside, waiting behind bushes with our guns. Emily was so excited that she was practically skipping down the path back to the house. And then we struck. Her scream was bloodcurdling and entirely satisfying; there’s video proof but I can’t embed it here. And it put me square on the naughty list.

So let me tell you about some damn cranberries.

If you guessed that a room full of pictures on the walls plus Ocean Spray propoganda plus a gift shop constitutes a museum AND a research lab, you would be correct. But wait, there’s more! It’s not technically a museum until there are people inside, being bored by the exhibits. It was time for me to shake things up a bit. As part of the shaking process, here I am, having my hind end picked by a suction picker. However, it turns out I’m not the only one who decided there needed to be some shaking-up going on. Really? Touching, wearing, and throwing have been problems in the past? I could see touching. Or wearing. But throwing? Just look at all these fine products that Ocean Spray provides to the cranberry-loving public! They even label it ‘marketing’, as if perhaps I was confused as to the entire purpose of the museum’s existence. We didn’t even get the benefits of the Ocean Spray movie, though it was prior to 4:30. What kind of museum are you running here, Ocean Spray? Oh wait, we already established, a crappy one. Did you know that cranberries were an important part of the war effort, that they spurred the soldiers on to kill their enemies? Wait, maybe it’s the potent mix of coffee, cigarettes, and candy. I know that just the thought of fruitcake makes me want to punch a guy.

Of course, with any food-based ‘museum’ plus gift shop, there’s going to be food for sale. And some of it is destined to be judged by the internet at large. Poll #1579393 Nom or Vom: Ketchup? Catsup? Are you here to solve my ketchup problem? Open to: All, detailed results viewable to: All, participants: 25 Would you eat this?

I could have gone to inspect the cranberry bog in person, but…eh.

18 Comments → Beach House Day Three: “Be good or I’ll take you to the Cranberry Museum!”