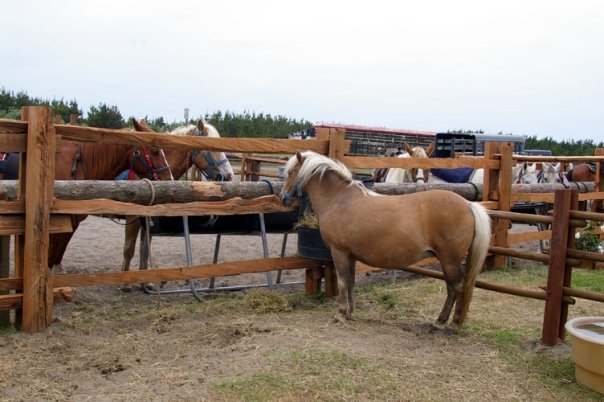 This weekend, Anne discovered that if she were a fish, she’d be a puffer. Except instead of swelling up when faced with danger, she swells up when confronted by fun. On Sunday, I woke up extra early and herded out Anne and Tonya to go horseback riding. Initially, Kirsten was supposed to come with us and we were going to ride as the Four Horsewomen of the Apocalypse. Kirsten was Famine, Tonya was War, Anne was Death, and I, of course, was Pestilence. But, as usual, whenever we plot to bring about the ends of the earth, something comes up and we end up terrorizing just a minor percentage of humanity and injuring ourselves along the way. It was no small miracle that I was actually up and about early that morning, and it was out of character and unsettling to be the one who was prompting others to hurry or we’d be late. As it turned out, no one else bothered to drag their ass out of bed that morning, so the three of us ended up being the only people on the ride. Anne offhandedly mentioned how her mother was allergic to horses. (Insert foreshadowing here.) I was seated on an obstinate horse named Mack, Anne was seated on an obstinate horse named Cisco, and Tonya was seated on an obstinate horse named Becky who came with an accessory– a foal named Dottie who enjoyed nibbling on Tonya’s shoelaces. Did I mention that my obstinate horse named Mack was actually a tiny pony? The foal was with us for the whole ride, capering, gambooling, cavorting, and any other ‘ing’ word that demonstrates that her spirit wasn’t broken unlike the resigned, joyless creatures we’d piled our sack o’ potatoes weight upon. These horses were clearly used to the shorter, hour-long ride, so when we hit the typical turn-around point, all of them had to be goaded into continuing to move further away from home base. Tonya’s horse actually had to be forcibly led by the guide’s horse, and more than once, Anne was left floundering in the back while her creepy, blue-eyed aryan nazi favorite horse sneezed a great big “FUCK YOU” and tried to go home. What was an even bigger laugh was at this point, the guide said that if we wanted to trot/canter the horses, this was the spot to do it as they’d have to walk the whole way back in order to not get them into the habit of running home. The only way to get one of these animals to move faster than a walk would be to bring it to a dead stop and make it wait while everyone else moved ahead. Then, and ONLY then, would it be motivated to move faster, urgently whickering “HAY YOU GUYS DON’T LEAVE ME”, but as soon as it was within striking distance of the group again, it would immediately turn into a energy conservationist zombie and shamble forward at the slowest of walks. But when we turned around…that was a different story. All of a sudden, when we had to force them to walk, mine was incredibly motivated to run. Every two steps, it would bust into a trot and I’d have to restrain it. The foal would gallop by and mine would go “yeaaaaaaaaaaah, that sounds like a great idea!” and again, I’d have to restrain it. I think Anne and Tonya were just grateful to have their animals willingly moving forward at this point. A few weeks ago, I’d received a summer recreation guide from the city of Kent, and I excitedly noted the six hour horseback ride. I hadn’t actually sat a horse in years, but I used to ride a lot and a six hour ride sounded awesome. Let me tell you: Two hours was borderline too much. At the end of the first hour, I was already squirming in the saddle. By the end of the second, I knew that the tender flesh of my inner thighs had taken quite a beating. When I dismounted, I could hardly walk. Today, three days later, I still hurt. Anne almost had to be lifted off her horse. At some point, likely during the dismount process, she brushed her hand across its coat…and then touched her eye. (Here is some more vital information.) After the ride, I forced everyone to walk bowlegged into Marsh’s Free Museum, where I finagled more change out of them for more pressed pennies and assorted crapola. I had my fortune told by a pirate. I saw an alligator man who reminded me what a creepy fuck I’d be if I had access to taxidermy equipment. I saw a player piano with a poem about how it still works, with an out of order sign next to it. I tried to justify buying an alligator head. I saw what appeared to be Simpsons characters made out of coconuts and for a moment was afraid I’d teleported into Tijuana by accident. I saw a pirate head whose sole purpose seems to be getting skullfucked and I couldn’t justify its purchase but I wanted to so very, very badly. At some point along the way, Anne realized her face was swelling near her eye. A lot. We went to lunch and realized we should have bought her an eyepatch as all of a sudden she had turned into a crazy-eye pirate. She then went into the bathroom and moaned that she’d need lady supplies soon, because she needed yet another thing to go wrong. Oh god, the laughter we had at her expense that lunch was nothing short of obnoxious and incredible. We joked that we’d stop in a tourist shop and see if they had some tampons with ‘Long Beach’ written on them…or perhaps ‘Extra Long Beach’, with a sand dollar tied to the end of the string. We told her to go back and kiss the horse goodbye to get super-puffy Angelina Jolie lips without the hassle of surgery, but warned her not to slip it any tongue. We laughed at the idea that Jim would probably have to put a bag over her head if they planned on getting it on before HE leaves for the next three weeks. We asked the server if they had any horse fillets. We made Anne laugh so hard that she almost turned into a play-dough fun factory, with peanut-butter pie coming out of her nose. We laughed so much that the servers wanted to know what was so damn funny and didn’t get it, even when we explained what was going on. We had strangers tell Anne that they hope her swelling goes down soon. We loaded her up on benadryl and Coke (to counteract the drowsiness since I couldn’t drive her car back as I don’t know how to drive a stick. My dad always wanted me to learn, saying that a situation could arise where it might be helpful. What situation would that be, Dad? When would it ever be a useful skill? GAWD.) and began the eventful 3.5 hour drive home.

Sunburn and Bugs 2016: The House of Eternal Return