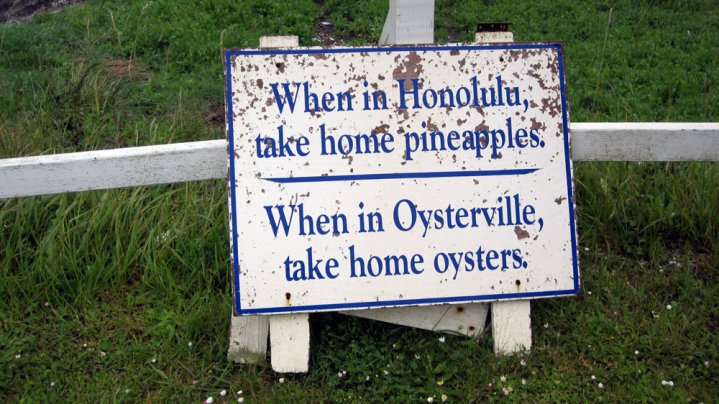 In the limited time I had on Wednesday before I had to drive home, we decided to take a trip to Oysterville to see what there was to see. And when you’re in Intercourse, you take home…? Hobo Station? Slaughterville? Hooker Hole? New Erection? Gaylordsville? Don’t leave me hanging, sign! Oysterville clearly fancies itself the Honolulu of Washington, and the resemblance is striking once you analyze the data. Honolulu, the capital of Hawaii, has attracted nearly 380,000 residents. Oysterville is an unincorporated community in Washington, and though there is no population information online, I can tell you that the one street that comprises Oysterville contains precisely twelve houses. Amazing similarities, no? A tourist trap is not a tourist trap without a general store, and while there, I learned some fascinating things about oysters, from a fascinating book called Oysters A-Z. There was a book next to it called Oysterville A-Z, so clearly someone has cornered that market. Surprisingly enough, nothing caught my fancy enough to want to make it mine, and I wandered outside to watch something much more interesting: someone had gotten his truck caught out in the beds, and even pushing it from behind and attempting to tow it out with another truck couldn’t do the job. Eventually, the Gorton’s fisherman (most famous for his role in ‘I know what you did last summer’) wandered out with a piece of rope so ratty he likely got it from his last trip to Atlantis, they hooked his truck in, chariot style, and with two trucks pulling plus half the town pushing from behind, they were able to free the truck. Now that the problem had reached a conclusion and the most excitement the town had seen since the great oyster molester of ’23 had passed, we decided it was time to move along ourselves. Thus endeth Beach Week 2010.