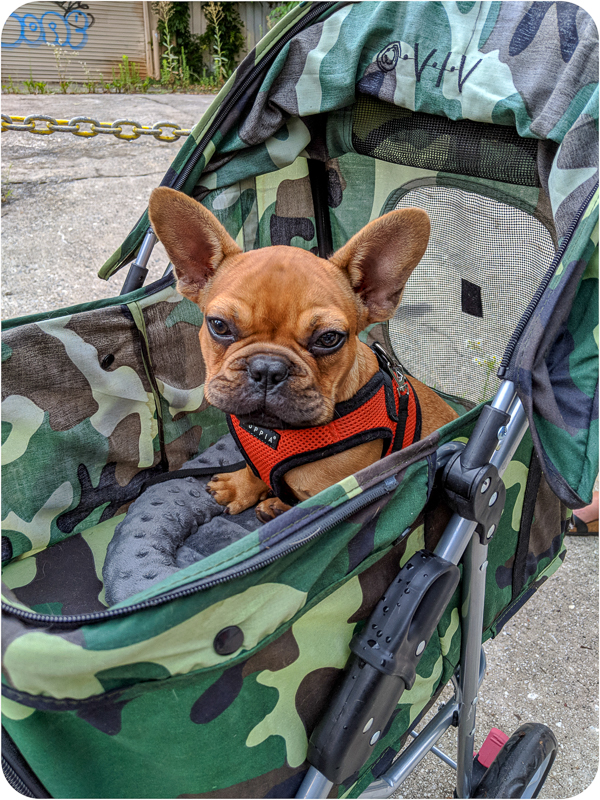 Being still a young pup and thus afflicted with a lack of stamina and focus combined with an occasional surplus of energy, indiscriminate eating when unobserved, and intermittent napping meant that little Walter was best suited for longer outings in his stroller than on foot. And I wanted to check out the Krog Street tunnel and the surrounding area, which meant it was going to be a longer outing. Even if it hadn’t been, Walter would have been more comfortable in his stroller, because that baby had all the options: convertible top up/down, memory foam seat, windows fore and aft, protection from wind/rain/Georgia’s many bugs, and it’s camouflage.

Many well-meaning people will tell you that camo makes you invisible, but its properties are more nuanced than that. Yes, of course, if you are wearing a head to toe full body camouflage suit, you are rendered entirely invisible to all but dolphins, as they have never been fooled by a human and they don’t intend to start now. If you’re wearing less than full head to toe camouflage, you are not in fact invisible but you do look like someone who might try to hide from a creditor in some nearby brush. When used as a fabric on a carriage, camouflage grants several benefits. For the pusher of the stroller, you get to look like the sort of person whose day might involve casually walking into a war zone. For the rider in the stroller, it’s more like riding in Wonder Woman’s invisible plane. Or as a mobile bush from which you can stalk prey–which is why I imagine Carrie’s cats particularly enjoy being transported to the vet this way.

About halfway down the beltline trail to our destination, the juicy air broke out into a full downpour. We waited out the worst of it under the overpass, where Walter made many new friends. Unfortunately I still ended up pretty soggy by the time we made it to Krog Street Market. Which meant that the icy cold air conditioning of The Merchant, instead of being the relief from the hot summer air it would have been otherwise, bit into my wet clothes and left me shuddering around while I shopped. This store was deeply cute though, and I walked out of there many dollars lighter and with some new glasses with birds on them, plus a special tiny glass covered in bugs.

We got lunch from Grand Champion BBQ and I guess that name could be accurate if they were the grand champion of that particular food hall’s barbeque vendors? Maybe? I can’t even say that it’s possible they had the best food in that food court because they’ve got a Jeni’s ice cream and I know for a fact that they make excellent ice cream. It’s ok, it’ll fill a roughly bbq shaped hole.  But I’d try something different next time.