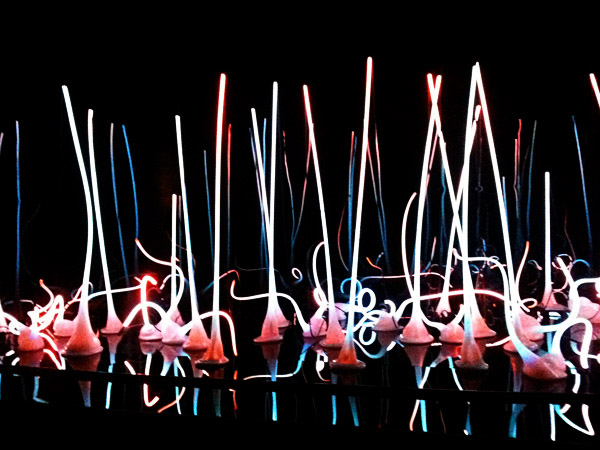 Last year, Seattle tore down the so-called “Fun Forest”–the ramshackle collection of worn, broken, sad-looking rides at Seattle Center that should have been torn down years ago if not for people’s collective nostalgia of a time when it wasn’t tagged with graffiti and falling apart. However, it’s 2012, the World’s Fair was 50 years ago, and rigs put up and torn down by carnies in a week’s time look more reliable, so good riddance, though I suppose it is a little sad to lose a genuine thrill of fear when you’re riding a rollercoaster that may fall apart at any given moment. In its place, the city has leased the land to Chihuly Garden & Glass, the world’s largest permanent exhibit of Dale Chihuly’s work. Outside, in a similarly permanent fashion, are multiple groups of musicians attempting to lure tourists into purchasing CDs of pan-flute renditions of popular music. We entered the building to the strains of Vanessa PanFlute Williams’ “Colors of the Wind”. While we waited for Emily and Evan to arrive, we perused the gift shop, where I learned that you can slap “local” on any $2 craft and charge upwards of $100 for it. I’m looking at you, chalkboard vases–don’t think that I didn’t see the how-to on Pinterest and can’t make my own for pennies on the dollar! I forced myself to leave before giving into the urge to pick something off a shelf and shatter it on the ground for dramatic effect. The exhibits are very much “Hey, look at this cool artwork” without much info on any of the pieces or on Chihuly himself. I don’t know that it would have enhanced my appreciation of the work to know more about the process, but with an entire museum dedicated to one man and his work, you’d think there would be more to it than “Look at this! Now look at this! Ooooooooh!” I’m pretty sure I saw this exact thing in Prometheus. Birds ain’t got no respect. No respect at all.

At this point, we exited the building into the glass gardens outside, and were immediately serenaded with Celine PanFlute Dion’s “My Heart Will Go On”, which I helpfully pointed out to Emily so as not to suffer alone. When she didn’t seem to be suffering enough, I took it upon myself to sing it, loudly, changing the lyrics as I saw fit. Emily, of course, was mortified, but I like to think I added something special to the overall ambiance for the other exhibit visitors. And she keeps going out in public with me so she’s basically asking for it, because I show people I love them through large, loud, public gestures. Where she did draw the line, however, was at my threatening to lick an ornament. I’m surprised we weren’t hustled out of there in a hot minute, but instead allowed to leave out our leisure, exiting through the aforementioned giftshop, where I once again resisted shattering an arts and crafts tourist rip-off. Poor impulse control, my ass.

The Tacoma Museum of Glass

6 Comments → “And my heart will go on and on for a period of time which closely approximates the length of this song which is forever!”