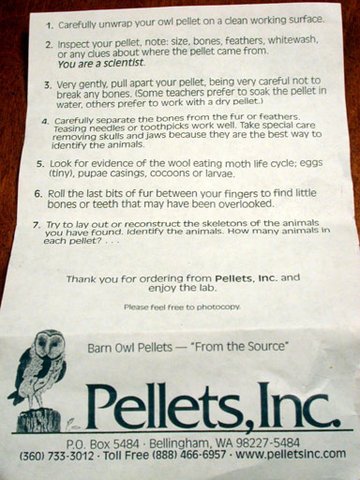 On Friday, I met up with daemonwolf and her ilk to do SCIENCE. In essence, this meant that we were spending our free time on a Friday night to dig through owl vomit, which is actually much cooler than it sounds. Here’s the part on the instructions that caught my eye: Who am I to argue with the printed word? I am now a scientist. This was way easier than four+ years of college, and I sincerely hope that I get invited to other gatherings with printed words that make me an ARTIST, a BUSINESSWOMAN, an ASTRONAUT, and a KABUKI WARRIOR. The sky is really the limit with these sorts of freely-photocopied degrees. Tara set the tone for the evening by putting one of these foil-wrapped wonders dangerously near her mouth. The rest of the evening was filled with jokes about owl bulimia and whether or not the pellet vomiting makes them the Princess Diana of birds, how our respective parents felt when we informed them we were spending our evening fiddling with vomit, and how much pelleted mouse fur it would take to make Donald Trump a decent-looking toupee. To start off with, everyone grabbed an index card, some gloves, dental piks, tweezers, and tiny brushes, and then spent some time carefully considering which pellet would be filled with the most awesome stuff. Some people were clearly in the ‘bigger is better’ camp, while others believed that good things come in small packages. Me? I hedged my bets and went for a medium pellet. My pellet, unwrapped. At this point, I put my camera away and got to business. I didn’t really want to touch the pellet and then touch my camera–it’s not a great camera, but I’m just squicky about that sort of thing.

After we were all done picking out bones and skulls and teeth (which took a much longer time than any of us anticipated, and if we were TRULY thorough about it, it would’ve taken several more hours to pick out the tiniest bones from the PILES of fur stacking up at our respective places. I mean, as a scientist, I knew these were compacted–I just didn’t know HOW compacted. MAN this is a long aside!) we had arts and crafts hour with the bones, gluing them onto clean index cards in the shapes that we felt best represented the animal that was initially consumed by the owl, using the diagram as our guide: One of the scientists gave his a little hair-fro so that we could better picture how the animal was in life. I feel this was a very accurate representation. The mandible throwing star is also a nice touch. One of the scientists got a pellet that consisted of nothing but enormous bones. Another one had an enormous skull. With their powers combined, they were Captain Planet!

The owl that produced the below pellet got exotic and swallowed a snake. SPINE-TINGLING. Tara found a crazy standing abomination with claw hands. It’s like that claw-man from Ghost in the Shell part II. As a scientist, I feel comfortable saying that I would be terrified were I to come across this in nature. I saved mine for last, because what I found was pretty flipping exciting, even for a scientist. I FOUND A MINIATURE CTHULHU. There’s no other explanation. Oh MAN are the elder gods ever pissed at the owls. Even moreso than that tootsie pop kid.

Nom or Vom: C is for Chocolate Chip Cookie Water