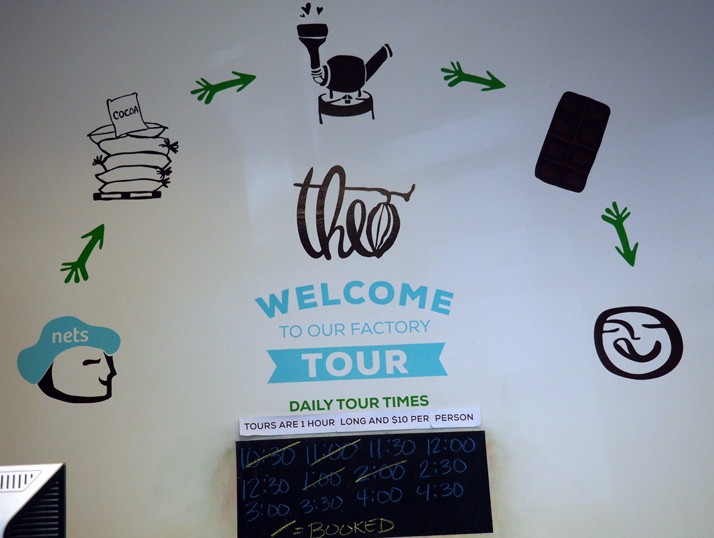 The air outside the Theo chocolate factory smells amazing, like the entirety of Fremont has been enrobed in chocolate.  It’s entirely possible that’s why the topiary dinosaur across the street is missing its face: it sniffed the air so hard that its nose plain fell off. That’s how good the air smells. There is no Theo waiting inside the door to show you around like Willy Wonka–Theo Chocolate isn’t named after a person, but rather the Theobroma Cacao plant from which their beans are derived. Theo is a bean-to-bar chocolate company, which means that while they don’t grow their own plants (save for one sad Charlie Brownesque tree in the factory), they do roast the beans themselves so they have more control over the end result. On the tour, after you are properly outfitted for food safety (hairnets, beard nets, and for those who didn’t wear closed-toe shoes, foot nets), they lead you into a room where they educate you a little about where the beans come from, how the pods grow, and let you taste some of the bars they sell, from dark to milk, with a variety of inclusions. Visitors were encouraged to ask any questions that they might have at this stage, and our delightfully smart-assed tour guide did his best to answer them all. One kid asked if the cacao pod shown to the group was real, and the guide looked aghast. “Of course it’s real! I don’t even know where I’d get a fake one, maybe I just need to go to the fake cacao pod section of Spencer Gifts…” He was not able to answer my question, which was “What does the cacao fruit taste like?” He said he’d heard it tastes really sweet, somewhat like cotton candy, and then suggested that when we fill out our reviews of the tour that since he wasn’t able to answer this question, that maybe it would be helpful to send him to Equador to plant some cacao trees. So, here goes: Dear Theo Chocolate, I think it would be a good idea to send your employees to help work on the cacao farms and plant some trees so that they may have a richer understanding of the entire process. Dear tour guide: If you get to go now, you’re welcome, and please send a postcard. After we’d tried the chocolate and asked our preliminary questions, we were taken into the factory proper and taught more about what the bean-to-bar process entails. Once the pods have been harvested, the high sugar content in the fruit ferments starting some kind of enzyme process (SCIENCE! As long as you ask no follow-up questions whatsoever, yes, I understand this process completely.) on their way to the Theo factory. Once the beans arrive, they’re run through the destoning machine, which cleans the exterior of the beans. The beans are then roasted, which is the process by which the beans develop their flavor–a result of the Maillard reaction, which is the term for when amino acids and sugars chemically react and give browned foods their desirable flavor characteristics.  The reaction creates new flavor compounds that wouldn’t otherwise be present. Think browned butter, seared steaks, and toast, and how differently they taste from regular butter, boiled meat, and soft fresh bread. That same reaction is happening in the cacao bean, helping to make it delicious. From there, the beans are deposited into the winnower, which separates the husks from the cocoa nibs.I keep wanting to refer to the winnower as the “widowmaker”, which may mean I need to step away from the schlocky movies and terrible fantasy books for a while. We tried a few nibs, and at this point, they mostly taste like really bitter chocolate. The guide told us that another guide says to his groups that they have a hint of banana flavor, but that he doesn’t like to influence people’s opinions–it’s funny, as soon as he said “banana”, I could taste banana. The brain is weird, powerful, and highly suggestible! After the beans go through the winnower, the husks are discarded, and the nibs are ground into a paste by a stone mill. The paste is then shuttled through a ball mill, which reduces the size of the cocoa solids, creating the smooth texture that we associate with chocolate. This is the point at which the mixture can be pressed to separate the chocolate liquor from the cocoa butter to make a variety of different products–however, since Theo makes chocolate bars, that doesn’t happen here. Once the chocolate has a smooth texture, it’s put into a mixer with sugar. If they’re making milk chocolate,  milk powder is added as well. I had always thought that the factories added fresh milk or cream to create milk chocolate, but in retrospect, milk powder makes a lot more sense since it’s shelf stable and consistent by volume and whatnot. After the chocolate is done in the mixer, it’s sent to the refiner, which reduces the particle size of the sugar to give it an even smoother texture. After the refiner, it’s put into a conche, which reduces acid through circulation and oxidation and promotes further flavor development, and once it’s out of the conche, it’s at this point that it’s basically a river of drinkable delicious chocolate. From the conche, the chocolate goes to a holding tank, where it may sit for a little while or get used up in a day, depending on production. Once they’re ready to use the chocolate, it goes into a tempering machine. Tempering is what gives chocolate its glossy finish. If it isn’t tempered properly, it will look dull with a whitish film and may not be solid at room temperature. After the chocolate has been tempered, it’s ready for any inclusions: mint, chai, curry, bacon…whatever they want to add. The inclusions are weighed before being added so that they’re consistent from bar to bar, from batch to batch. If the chocolate’s destiny is to be made into a bar, the chocolate is then poured by hand into the depositer, which pours the chocolate precisely into molds. The molds are placed in a cooling tunnel which keeps the fats bonded and happy while the bars harden. Once they’re solidified, they go through the wrapping machine which packages them for sale. If the chocolate is not going into a bar, after the tempering machine, it’s sent off into the kitchen for other delicious Theo products: s’mores, truffles, toffee, and more. I had an earl grey truffle that was out of this world, and I brought some home and shared them with Jason even though I really, really, really didn’t want to. That’s how good they were, my inner Gollum wanted to hoard them away. After the tour wraps up, you’re given an “I took the tour” bar of chocolate and set loose in the Theo factory store, where you can buy all of the chocolate you ever wanted, and try even more samples if you’re up for it. Not only do they have their entire retail line for sale, but they also have a number of small experimental batches, like basil chocolate, and their seasonal sweets and truffles as well.  For $10, you could hardly spend a better hour if you’re at all interested in the chocolate-making process!

2 Comments → A Tour of the Theo Chocolate Factory