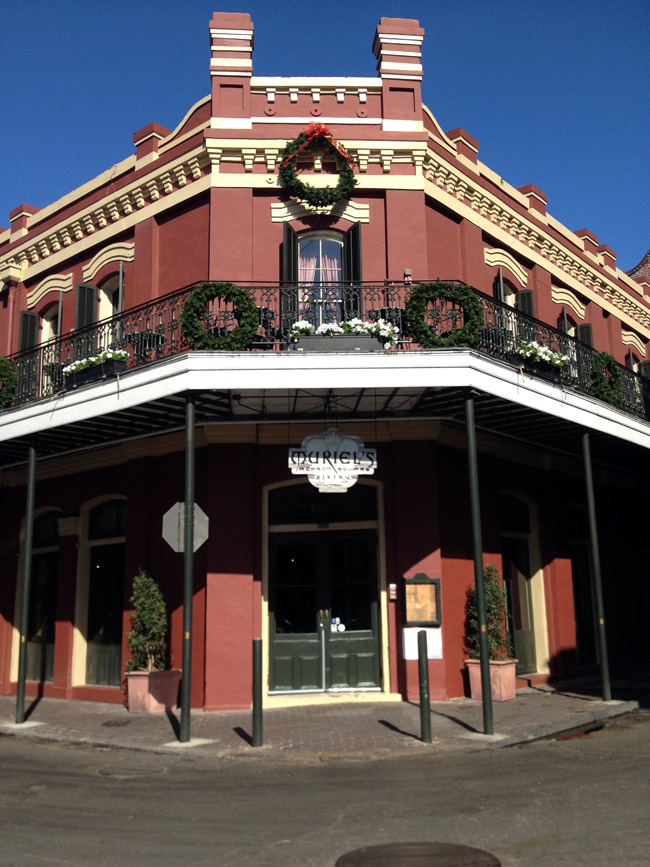 If you believe what all of the haunted tours have to tell you, New Orleans is filled with ghosts, vampires, and more than a little magic. Conveniently, of course, these hauntings never stray far from the downtown core, because there are limits to how far tourists are willing to walk. So many rumors and myths swirl around the various hotels and restaurants, peddled by the establishments themselves, any number of contradictory tour guides, and people looking to make a buck from book sales and TV shows. The French Quarter two story mansion that houses Muriel’s, located on the corner of St. Ann and Chartres street, has a multi-storied reputation, most of it fanciful, wishful thinking, or straight from the rear end of a horse carriage. The building is original to the 18th century? Nope. There have been a number of properties built, razed, and burned on that spot dating to the mid 1700s. The property that stands there now was built around 1900. One of the owners, Pierre Jourdan/Joseph Lippardi (depending on who is peddling the story), was a compulsive gambler who lost his beloved home on a hand of poker and subsequently committed suicide on the property? Nope.  When Pierre Jourdan died (not from suicide), the property was left to his son, who was at that time also deceased (update those wills, people!). It’s changed hands a number of times since then but never via gambling or suicide. There are ghosts haunting up the place, especially from that aforementioned suicide? I couldn’t say, but probably not. Especially not from a suicide that didn’t happen.

Here’s the thing: Muriel’s is so cool. They shouldn’t need to make up a story about a ghost and always have a table set for said ghost to draw in traffic. It stands on its own. When you’re sipping a honeysuckle cocktail in their posh red seance room upstairs, you feel like you’re a part of the coolest secret club in town (albeit one that plays “Let’s call the whole thing off” on an endless loop, and I’d like to know who to blame for that one, be they human or ghost). And the food? The meal I ate at Muriel’s was one of the best meals I’ve ever eaten in my entire life, and I am a prodigious eater. Between the three of us at dinner, we ordered nine different courses, and each thing was the best thing I’d ever eaten. I was too busy practically weeping with joy at the table to even think about taking pictures of anything. The gulf shrimp and goat cheese crepes were creamy, dreamy perfection. The savory gorgonzola cheesecake was tangy, salty, and the accompanying tart green apple was the perfect complement. The motherf’ing shrimp and grits were divine. And the double cut pork chop with a sugar cane apple glaze? I have dreams about that pork chop.  Sometimes when I’m sitting at an intersection waiting for the light to change, I’ll think about that pork chop and smile. I’m happy to think that somewhere inside of me lies some energy from that pork chop so that in essence, I have become one with that pork chop. I guess you could say that I have been positively haunted by that pork chop. Mmmmm, ghostly pork chop.