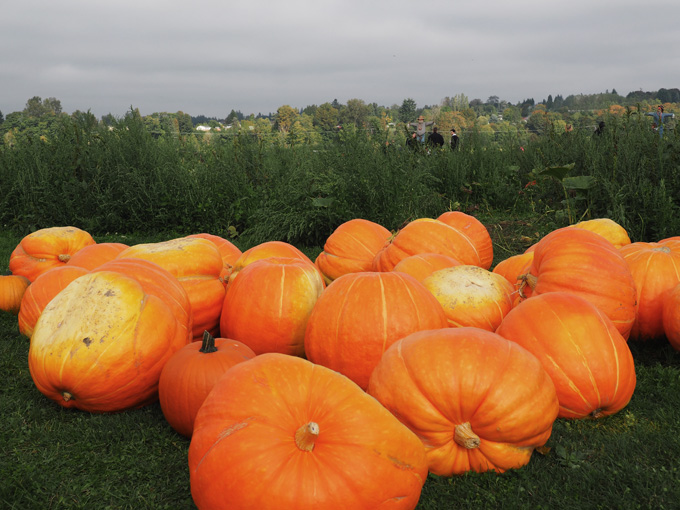 Now that it’s officially fall, the time is right for a fall adventure. Namely, corn mazing, pumpkin patching, and petting farm animals. We visited The Farm at Swan’s Trail in Snohomish on opening day and were excited to see that in addition to a corn maze and a pumpkin patch, they also offer apple picking and duck races. That’s right: duck races. I don’t know how long it took to train the little quackers to speed down their trough and then fly back to their pen once the race was over, but I appreciate the trainer’s diligence, as the races were delightful. They zip through the water very quickly and adorably, and they’ve solidified for me that should I decide to raise any backyard fowl for eggs, it’s going to be ducks and not chickens. I rooted for Chocolate Thunder both times, and both times he came in dead last.

The Farm at Swan’s Trail has put their own spin on their corn maze: instead of doing a Halloween theme, they have recreated the state of Washington and the major roads and thoroughfares therein on twelve acres, with bits of trivia and information about each city marked on the map. You can start at one of four starting cities in eastern Washington, and the goal is to exit at Gray’s Harbor. Along the way, there are a few “road closures” so you can’t just blaze across the entire state on I-90. Not really all that different from the real Spokane. They even recreated Sam Hill’s Stonehenge with a corn twist! The Peace Arch looks a little different than I remember, though. They include three wooden bridges in the corn to simulate the real world bridges: one at Vantage, one at Grand Coulee Dam, and the one we all remember watching shake apart in physics class, the Tacoma Narrows or Gallopin’ Gertie. On these bridges, you can just barely see some landmarks peep out of the top of the corn. On some years, you see a little bit more, but it’s all dependent on the height of the corn, which grew to extraordinary heights this year. We only saw the tippy top of the Space Needle and the Peace Arch–everything else was hidden by corn. When we got into the area of the corn that would roughly be categorized as our neighborhood, I sent Jason off to simulate skulking in the shadows like a teenage delinquent, because I’ve got to find some way to laugh about what’s been going on in our backyard. I really enjoyed the Washington map maze–granted, you’re never really “lost” insofar as you know your roads, but it was also fun to visit all of the cities in miniature and learn interesting bits about their history. For instance, I never knew about the British/U.S. territory dispute in the San Juan Islands that was sparked by a pig (later dubbed “The Pig War”). I bet this place is a hit with schools for field trips! After we finished the corn maze, we checked out the hay maze, which, as it turns out, is really only a maze for those persons under two feet tall, and ends in a slide that I feel I could have easily cracked in half with my ass…so not really for adults. But I’m sure it’s a blast for kids! They’ve also got a petting zoo area at the farm, with a pony, a donkey, some goats, and some wee fuzzy pigs, whom I discovered don’t much appreciate being petted on their fat little piggy cheeks. Thus rejected, I went off to eat my feelings with some kettle corn, which we dubbed our “hot kettle corn baby”. When we’d pumpkined and mazed and patted and kettle corned to our heart’s content, we set off to another farm stand that had advertised large boxes of honeycrisp apples for sale as well as fresh-pressed cider and u-pick flowers. I like all of those things. I especially liked that they also had sheep. Cute, fuzzy, baaing sheep. I picked approximately a truckload of dahlias for under ten bucks, and I brought home enough honeycrisp apples to make a 10 pound pie and STILL have apples leftover, so I’m calling this a successful fall adventure!

2 Comments → A Fall Adventure in Snohomish