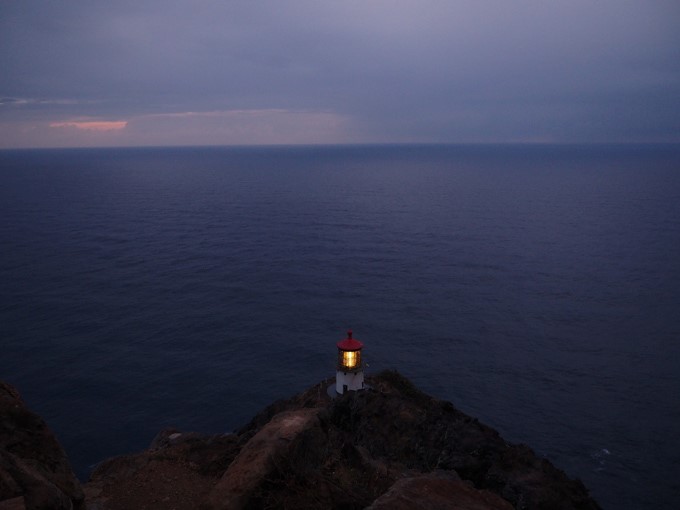 One of my thirty-three goals to accomplish this year was to take an early morning hike that ended with a sunrise view, and I felt that doing so while in Hawaii would be one of my best opportunities for a number of reasons, namely the relative ease of getting high enough to get a decent view of the horizon, and the time difference working to my advantage since I’m not what anyone would call a morning person*. After a bit of research, I determined that the hike to Makapuu Lighthouse would be the ideal morning route–only about two miles round-trip with a relatively low chance of serious injury due to hiking in the dark with a flashlight. Since I was staying on the North Shore and Makapuu Lighthouse Point is on the opposite side of the island, I set my alarm clock for 3:30 so I’d arrive at the end of the trail with plenty of time before magic hour began. Sneaking out of the house in the middle of the night so as not to wake the others was an unusual experience. Stars glittered thickly across the sky, and I saw the Milky Way for the first time.

The drive across the island was quiet, but not deserted. What was deserted was the park: it doesn’t officially open until 7am, half an hour after the sunrise. The reviews I’d read told me to expect this, to park down the road a bit, and to clamber through the gate to access the trailhead, so that’s what I did. It’s eerie hiking in the dark. Your light bobs across the trail, and you become keenly aware of everything you can’t see–all of the eyes that could be watching you approach, taking advantage of the fact that you’re on unfamiliar terrain, and circling behind you to crack you on the head and take your stuff. Yes, I have been watching too much Walking Dead recently, why do you ask?

The hike itself was easy, and ended with a rocky area that led to a few observation platforms. I arrived well before sunrise, so I had a drink of water and sat down to wait. All of a sudden, Jason said “That’s a big bird!” I saw its dark brown back half swooping around the platform and looked to see where it might have gone to get a better look. Evidently, it wanted a better look at us as well, because the next thing I knew, this enormous owl was hovering above us and darting down as if to attack. I threw my hands over my head in a defensive posture that can only be described as “horrified flailing” and immediately regretted the owl-taunting I’d engaged in recently. It swooped around us again and I seriously prepared myself to fight an owl with my purse. It pump-faked at us again and then flew away. I remained paranoid for the rest of the hike. Was there a nest nearby? Was I inadvertently getting closer to it? It was one of those rare moments in life where you hope to not find something. You want the cancer scan to be clear, the house to have gone undisturbed in your absence, and the attack owl to be anywhere other than where you are. Eventually, I saw another spot of light moving up the trail, which confirmed my earlier suspicions about how easy it is for others to see and track a light while the carrier of the light has no idea that they’re being observed. I watched them until they made their way to the other platform. By that time, golden light had begun creeping over the horizon. As it grew closer to dawn, more and more people arrived, much too talkative for this early in the day. What never really arrived was the sunrise. It got progressively brighter, but a cloud wall obscured the actual sunrise, and shortly after that, fog rolled in and it began to rain. By the time we made it back down to our car, the parking lot was packed full of cars and tour buses, and I was glad I’d gone before the rest of the world was awake. It was an amazing trip–just watch out for the owl.   *I can’t even count the number of times that I’ve said to myself before going to sleep that I was going to start getting up early and exercising in the mornings, but I can tell you that when every single one of those mornings has come, I responded to my previous day’s resolve with “ugh, no” and burrowed deeper into the covers.

A hike to Blue Lake

Up and Atom! Flying with Paradise Air