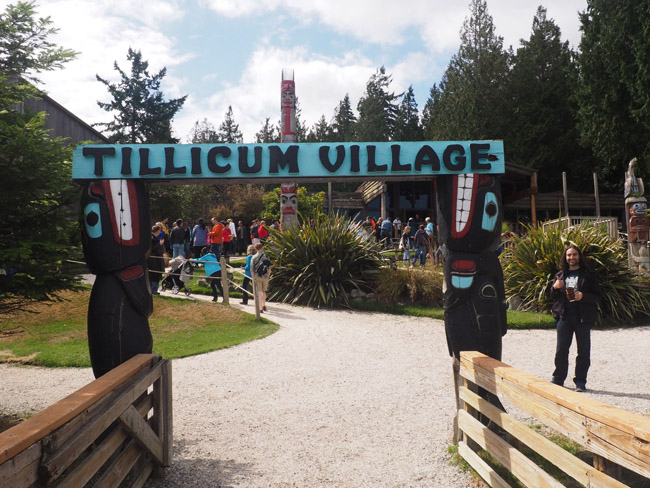 Leave it to me to book a trip to Tillicum Village on a date when an enormous windstorm hits the city. The water seemed pretty choppy on the ride over to Blake Island, but not insane storm worthy, so I was surprised when the Argosy crew announced that the island had lost power and everyone was going to try and make do by candlelight as the food was already cooked. Uh oh.

Given the aforementioned “make do” information, I was all set to have this be a sort of medicore experience, a half-assed version of the full-priced experience I’d paid for, AAA discount nonwithstanding. It was actually intimate and charming. We were still greeted with a mug of piping hot steamed clams in nectar upon our arrival, the shells of which we crunched underfoot to add to the pathway to the longhouse. We were seated right by the stage, next to an elderly couple who split their wine flight with us as the wife insisted the husband couldn’t handle all of it himself. The food was all delicious–the salmon (sustainable), the stew, the rice, the bread, the blackberry cobbler made with locally sourced berries–we stuffed ourselves.

The performances were likely quieter than normal, and with no light effects or other distractions, I could really focus on how special it was to be there in that moment. I’m glad that it seems like everything done as part of Tillicum Village is executed with respect and care. The native stories were told by Roger Fernandes, a member and storyteller of the Lower Elwha Klallam tribe. The songs and dances were used with the permission of the native familes to whom they belong, which is really important–it’s why I took no photos, because they’re not mine to share with you. They also made sure to note that while you see totems on the property, they are actually not part of the traditions of the coast Salish people of Puget Sound and are actually sourced from the coastal tribes of British Columbia and Alaska. My expectations of the day were defied in every way, and I couldn’t be happier about it.

On our way back from the island, I checked my phone and saw that my area was entirely without power as well, a friend had lost a good portion of her roof, and she was driving over to my place to make sure a tree hadn’t crushed my dog (for the record, he remains uncrushed). The power was out for the remainder of the day, and I was grateful I’d stuffed myself on salmon earlier because even after spending 11 days in a blackout, I’m still terrible at stocking food you can eat straight from the pantry. Thank you, Tillicum Village.