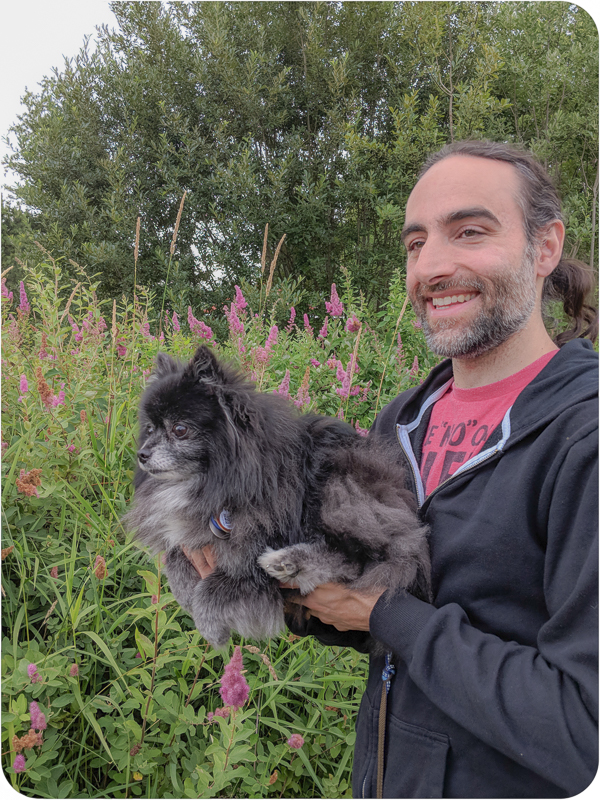 My friends Ashley and David had some massive plumbing issues at their house this year and needed to move out for several months while repairs were completed, which is hard enough given their young daughter to consider, harder with two pets. Their dog, Teddy Bear, has to be medicated twice daily for seizures, and they didn’t want him to be alone in a kennel in case he had one as the medication doesn’t repress them entirely. So instead, he came to live with us during that time period, and he was an absolute blessing, and dare I say, lifestyle inspiration. Jason and I were both impressed with the way Teddy Bear just flowed into our house, unafraid, and adapted so easily to all the big changes that moving homes and staying with new people represent. Teddy Bear looks like a big, fluffy cat from behind and a tiny adorable foxbear from the front. He is pure love with people but hell on wheels if you’re a bird, a fly, a bunny, or god forbid, another dog out on a walk entirely minding its own business. Jason determined that this abrupt shift in personality was Teddy Bear going into “ferosh mode”, as he morphs from a dog into a snarling tornado of fur and teeth.

Teddy Bear doesn’t know how to fetch but he will chase a thrown toy. He can’t hear you calling from the door when he’s been dallying out in the yard but he can hear a cheese wrapper open from a quarter mile away. I fed him so many raspberries fresh off of my raspberry bushes that he figured out how to harvest them himself and made many trips to the snackbush, and several hopeful trips to the snacks-are-all-gonebush. He also discovered he enjoyed munching on apples that had fallen from the tree and that’s when we discovered we couldn’t let him out there unsupervised anymore or he was going to either gain six pounds or contract Apple Madness, which is a condition that I made up and assume involves a lot of bodily functions and wild eyed dog drunkenness.

I think every dog has a dialogue, and I think that Teddy Bear’s is primarily a happy “I’m Teddy Bear!” His dialogue when in ferosh mode is too unseemly for publication.

I spoiled him relentlessly, buying him a bag of fancy organic peanut butter dog treats at a farmer’s market in Atlanta, and then ordering him another bag when the first one ran low. Teddy Bear would sleep at the foot of our bed and would somehow know instantly when I woke, at which point he would move up to the head of the bed to say hello. We’d get up, I’d let him out, and when he got back in, he’d do a little begging dance for his medication squished into a small globule of yellow American cheese. I didn’t make him dance for his life preserving medication, he chose to. I did, however, ask him to jump through a hula hoop several times for my amusement.

He would also dance for his supper, begging with his front paws while balanced on his hind legs, but if he determined I was dilly-dallying too much, he’d drop to all fours and charge at me, launching into my calf or the back of my knee with his stiff little front paws. He successfully buckled my leg a couple of times, Teddy Bear’s aim was impeccable.