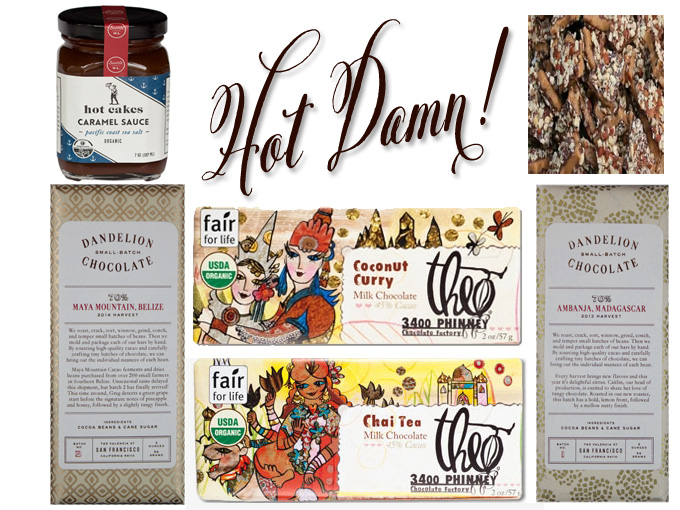 It’s my favorite day of the year! Later tonight, I’ll be handing out toddler-size chocolate bars to excited kids and sullen teens, so why not wrap up a fun week on the blog with my very first giveaway? For you, like some sort of half-assed Oprah, I’ve got some bars of Theo chocolate, fresh from the factory, and some of my favorites from the Northwest Chocolate Festival: Dandelion small-batch single-origin chocolate bars from Belize and Madagascar (You know how when you go to wine-tastings and some dude with his nose in the air swirls his glass and says he can taste piquant cherries, verdant summer, children’s laughter, and a hint of impudent squirrel, and all you taste is fucking wine? This is like that except you actually CAN taste the different notes. Amazing!), burnt sugar salted caramel sauce from Hot Cakes that made me weak in the knees, and some of the best toffee I’ve ever eaten from Holm Made Toffee (they make several amazing flavors and I almost included red pepper or lavender but decided to go with a classic instead).

All of this stuff has been paid for by me, is not sponsored or affiliated in any way, and is being given away for the joy of giving and also to maybe spread the word about the blog a bit. If no one enters, my game plan involves eating all of it in one sitting while crying, which sounds delicious except for the crying part so it’s really a win-win. 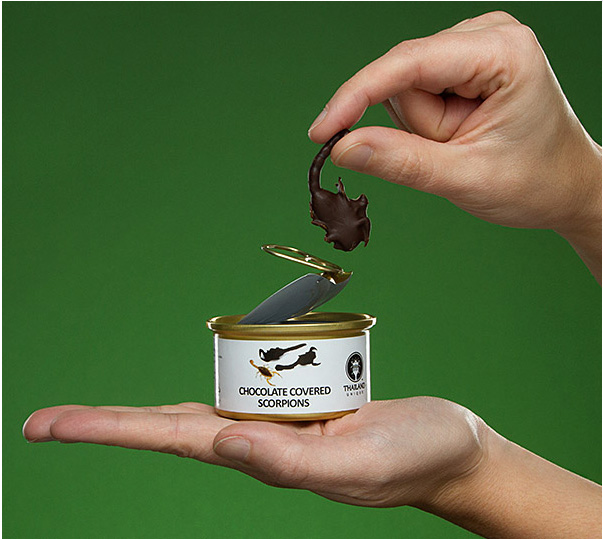 Pros: Enrobed in chocolate like all the finest things in life, devenomed for your eating pleasure, not eating insects is just a western social construct, probably like the crunchiest chocolate covered chip in the world…

Cons: …Except that it’s also filled with goo and is made of scorpion, you have to chew the stinger thoroughly to prevent it from scratching your esophagus on the way down which means more time in your mouth, given our Western social constructs you can prepare to never be tongue-kissed again by attractive people who now know you’re a bug-eater, being haunted by the ghost of a pissed off scorpion who can call his fully-venomous brethren on you 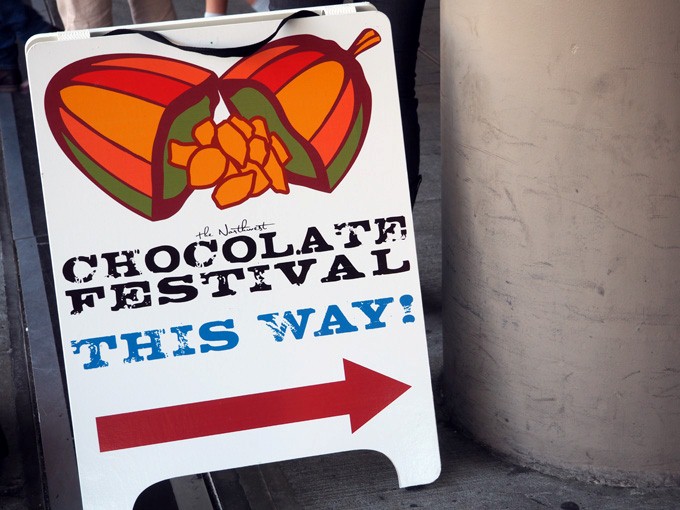 More and more, the Pacific Northwest is coming to be known as a place for local artisanal food, microbrews, and wines, so it only makes sense that chocolates were soon to follow. The Northwest Chocolate Festival is a celebration of chocolate in all its forms, from nibs to confection to pastry, packing in over 80 companies and 50 workshops onto the waterfront over two days for enthusiasts to partake (gorge) and make merry.

It is unbelievable the amount of chocolate one can eat at the festival if they try. There were two entirely full show floors, with each vendor generally offering multiple samples, encouraging you to try more, with most with wares for sale at the show so you could take home your favorites. I came into this mostly blind, having purchased my ticket on one of those daily discount sites, neither reading the ticketing site’s description nor the festival website, so I had no idea it was as large and involved as it was or I might have eaten some breakfast beforehand or planned to attend both days. Between the workshops spread over seven stages and the vendors, there is no way to see and try everything in one day, or even over both. There were culinary classes, tasting workshops, artisanal chocolate lectures, demonstrations on Mesoamerican chocolate drink preparation,  discussions on farming, a pro series, and even some spicier talks in the aphrodisiac zone! I had two goals: eat as much chocolate as humanly possible, and attend the noon keynote presentation: “Taste the fruit of the cacao tree” because even if the tour guide at Theo had been able to answer my question about its flavor, it’s something I wanted to try for myself, and it’s a rare opportunity in the United States. And THEN it was time for the lecture. Bill “The Chocolate Man” Fredericks spent most of the hour going in depth into how the fruit of the cacao tree grows and how delicate the fruit and ecosystem are that sustains it. I had learned some about this from the Theo tour and Chocolate: The Exhibit  at MOHAI, but the majority was new to me. For instance, I’ve already talked about how chocolate grows off of the trunk of the cacao tree and that it needs to be harvested by humans. I learned that this is because the cacao pods grow out of “blisters” on the trees and if those blisters are damaged in any way, that part of the tree will never bear fruit again. Also, if you clear the litter from below the trees, they will not set fruit, as the litter is the home for their pollinators. He also said the fruit itself is easily blighted, that disease and mold spread rapidly, and because some large companies will buy the fruit (and pay the same price) whether the fruit is moldy or pristine, some farmers aren’t as motivated to care for the trees correctly, and they’re also planting varietals that have higher yields but shittier flavor. This is one of those issues that’s remedied by chocolatiers who have a close relationship with their cacao growers: they pay higher prices to ensure the best quality.

He also passed two fresh cacao pods around the room and encouraged people to hold, smell, and shake them: the way to know if a cacao pod is ripe is if the beans shake inside the pod. Rest assured, I shook the shit out of the one I was passed and it was indeed ripe. Just before the hour was up, they were passed back to the front and Bill demonstrated how to best open the pods so as to not damage any of the seeds inside. When he cut them open, the insides looked (as my friend Shannon put it) “like horrible alien worm babies”. She was not wrong. But then the hour ended, people started leaving, and we still had not tasted the fruit which was the whole reason I attended. The remaining attendees were invited on stage to inspect the opened pods more closely, and I don’t know if that invitation included eating it, and I don’t know who started reaching out and grabbing a bit of horrible alien worm baby for their very own first, but all of a sudden hands started flying in and tearing it apart, and I escaped with a piece of it for myself and the knowledge that I had participated in something that could probably be categorized as a mob. The important thing is that I was able to try the fruit, which I will describe thusly: like a thinner, slimier, membranous lychee with a much larger seed. And, since it was in my mouth, I ate the seed as well, which tasted like slightly bitter nothing. It was at that point that my mind was well and truly blown, because centuries ago, people found a fruit that just generally kind of sucked and then just kept trying to make it palatable instead of tossing it over their shoulder and moving on, and the result of that experimentation is one of the most popular flavors in the world. Perseverance, friends. After trying my illicit bean, the group made their way to the Aphrodisiac Lounge, entrance to which cost an additional $5 and proof of age. I wish I had known what was going to be in there beforehand, because I might not have laid down the additional cash. I mean, everyone knows that aphrodisiac is code for booze and adult situations, I just expected something a little more stimulating or maybe a little less sad or…I don’t know. It was a room that was much too brightly lit for sexy thoughts (the most brightly-lit room in the entire festival, in fact) with about six vendors offering boozy samples: two beers (both IPAs, ugh, everywhere you turn in Seattle there’s another damned too-hoppy IPA), a couple of brown liquors, a vodka thing, and some chocolate wine. I wasn’t really into any of it, but damned if they didn’t already get my $5, so I decided to try to put down at least one of each. Neither my mouth nor my stomach were happy with that decision, but that part of my brain that revels in stubborn determination was quite satisfied. Once we were finished getting sauced, we went to find my friend’s partner who had stayed with their baby in the children’s play area, which turned out to be (and I am not making this up) literal piles of trash. You’ll play in it and you’ll like it and that’s final.

We eventually made our way around the first floor of the festival, trying more samples, pointing out particularly tasty bites to the rest of the group, but I began to lose both steam and my taste for sweets, so I definitely did not try as much on the first floor as I had on the second, which is why it might have been wiser to spread my visit over two days. Still, overall, it was well worth the purchase price and I’d absolutely consider attending next year.

The smartest people there: The Chocolate Man | Whoever decided to set up a gourmet food court with food other than chocolate including crazy-awesome pizza| That lady I saw walking around with a camelbak of water, because eating chocolate for hours is thirsty work

The biggest losers: That sad-ass aphrodisiac zone | That sad-ass children’s play zone | My sad-ass gut after eating much too much chocolate