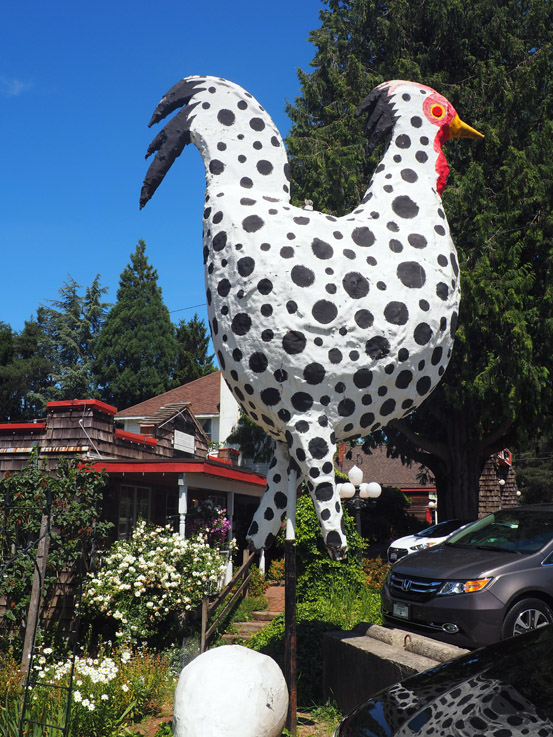 What came first, the giant chicken or the giant egg? If I was working on a project like this, it would for sure be the giant egg, as it’s much easier and would allow me to say I’m “half done” much sooner, which gives you a little insight into my creative process. Namely, that I’m lazy. It appears that the chicken used to have legs, but now doesn’t, for whatever reason, which also begs the question: we all know the saying about what the chicken does when its head is cut off…but what happens when it’s the legs instead? 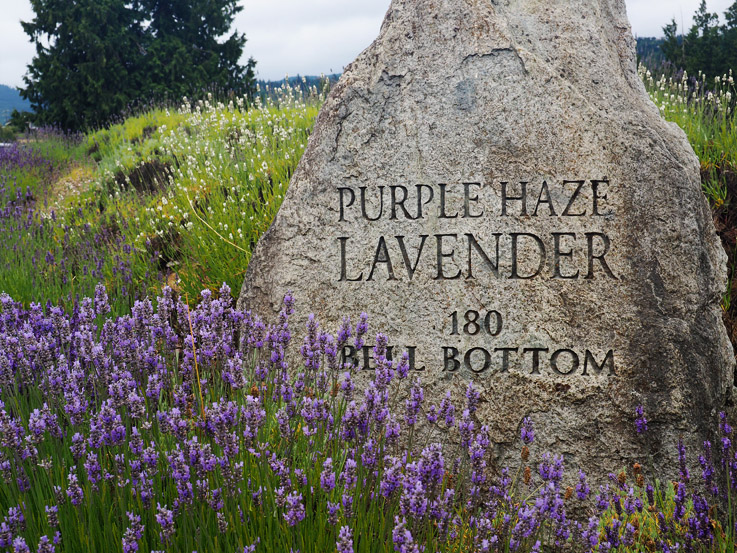 Sequim (pronounced more like “squid” than “sequin”) is serious about its lavender. When I first decided to attend the Sequim Lavender Festival, I had no idea how central lavender is to the town’s identity. I didn’t know much about it at all, actually.

Sequim is located on the Olympic peninsula of Washington, and lies within the rain shadow of the Olympic mountains, which makes it much drier than the surrounding areas. They bill themselves as “sunny Sequim,” but I’ll have to take their word for it as it was overcast and threatening rain the day I visited. What was immediately evident was the town’s pride in their lavender. Lavender shrubs were everywhere, even growing in the landscaping of Sequim gas stations! The Sequim Lavender Festival takes place in July, and activities are spread throughout the town, marked at their entrances by purple flags. There are two non-farm locations, one in downtown and one in Carrie Blake Park; I parked in a church lot near the park location for a nominal fee. They offered a shuttle and a hayride to Carrie Blake Park, but it’s an easy walk. From Carrie Blake Park, they have a free shuttle running back and forth between the downtown location, and one of the farms also offered a free shuttle from that location.

Each place had their own spin on the festival; most offered live music, shopping, and food items with culinary lavender. Some offer u-pick lavender, some offer classes on distillation, crafting, cooking, beekeeping, and more. One offers high tea with George Washington!

This festival is incredible, both in scope and in quality. The farms and craftspeople are proud of their work and happy to show off to visitors, everything smells amazing, and I was in lavender food heaven. I wasn’t able to try everything I wanted to try, owing to limited stomach capacity, but everything I did try was so, so delicious. Peach lavender ice cream. Candied lavender walnuts. Piping hot mini donuts with lavender sugar. Dungeness crab cakes and greens with lavender balsamic vinaigrette. Lavender sweet tea. A warm from the oven apple mini pie.  A soft lavender sugar cookie. I may have proclaimed it the fattest day of my life. 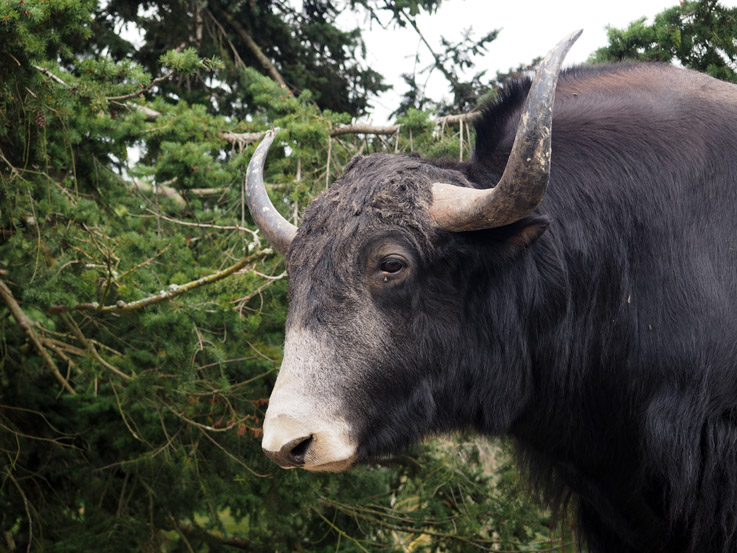 The Olympic Game Farm used to be the home of Disney’s nature film animal actors; they were the bears and big cats they’d film for close-up footage when it would be too difficult or expensive to obtain in the wild. The animals on the farm today are the slackabout progeny of these animal celebrities (plus a number of rescues), and for a fee, you can drive through the farm, pat some of them, and feed them whole-wheat bread. When we arrived at the farm, after giving us a waiver to sign, an employee asked if we’d like to buy any loaves of bread to feed the animals. I’d told him that not only would we like to buy bread, but we’d take as many as he could sell us. It turned out the number they could sell us was only limited to money and car space, so instead, we bought his recommended amount, two loaves, so we could feed out each side of the car.

The tour started off slow, with nothing to be seen on either side of the road. The general consensus was that we hoped that eventually they’d have animals on their animal tour. I heard a noise out of my window, and Jason whipped a slice of bread past my head “just in case.” Eventually, there were some yaks alongside the road. They mostly stood quietly, doing their yak business, although one of them would eat proffered bread if you placed it within an inch of his nose. This is when we learned that yaks can eat an entire slice of bread at once, much like a vending machine sucks in bills. Further down the path were some utterly disinterested  fallow deer and zebras. The deer stayed far away from the car path, wanting nothing to do with bread or tourists, while the zebras were closer to the road. I had hoped to feed one (even though we had been warned to watch our fingers as zebras can bite), but I was still excited to see a zebra so close. Zoo zebras are generally far away, and before that, the closest I’d come was a sad donkey painted with stripes in Tijuana. A little further down the path, we both had a “Is what’s happening down the road what I think is happening? OH MY!” moment. As it turned out, yes, two llamas were in fact giving a mating demonstration on the side of the road. Now, I could be an adult about this, but instead I’ll tell you that the noises that a male llama makes when he’s getting down are the worst. Imagine a regular llama sound but much throatier and jucier and you’re halfway there. Thankfully, Jason  took video so you don’t only have to imagine.

A bit further down the path, we had our first encounter with an animal that wanted all of the bread we’d feed to it: another llama. It is really disconcerting to have an animal stick its head into your car to be fed, especially when it knows that you’re holding out because it can smell the loaves you both have stashed between your feet. We tried to creep the car along, and it kept right along with us, insisting that we were being stingy and unfair by only feeding it four slices. Eventually, it was attracted to another car by the passengers waving bread out the window. I don’t know what the last car in line for the night does…maybe they take a llama home with them, or they’re subjected to a llama tantrum. In the bear fields, they had both kodiak and black bears; these were separated from the cars by two fences: one that a bear could use as dental floss, and the other electrified. I think the first fence was there mainly to keep the average dumbass from trying to hand-feed and/or ride a bear. The Olympic Game Farm advertises their waving bears, but no bears waved at us. One did, however, fetchingly snap a slice of bread out of the air. It reminded me of summers in northern Wisconsin with my grandparents, feeding marshmallows to the bear cub outside of a restaurant called The Honey Bear, only with slightly more nutritionally sound food and less cruelty as these bears have much more space. Speaking of space, the part I didn’t like at all (actively hated would be more accurate) was the predator zone. Here, they have a lion, a few tigers, some wolves, and other big cats in tiny, tiny pens that have chainlink on all sides. This area strikes me as cruel, and the farm would be better without it. Considering you can only see the predators on the driving tour and you obviously can’t interact with them in any way, the people coming to visit wouldn’t miss much from not seeing a bunch of chainlink fences and depressed animals, and on the flip side, the animals would benefit immensely from being in a sanctuary situation where they could actually stretch their legs and, you know, live. After the predator area, visitors are given the option to leave or enter the high risk area with the bison and elk. Since our last encounter with bison was with the invisible variety (and we didn’t get to feed them), we pressed forward. They make it very clear when you enter the park not to stop in the bison area, but to roll through at a low speed, as this reduces risk of damage to you and your vehicle. They state it in the rules pamphlet they hand out. They state it on a big sign before you enter the bison pen. What I’m saying is, they are very clear that you should not stop your car at any point during your trip through the bison pen. Unfortunately, the farm was so busy that just one person stopping was enough to create a domino effect, and so eventually everyone was stopped in the bison pen. I’m sure it didn’t help that they were standing at the entrance, waiting to mob anyone with bread. All of a sudden, you were in a scene from Jurassic Park, with a giant eye scanning the contents of your vehicle while you look straight ahead and try desperately to avoid eye contact so as not to draw its attention. “But why are the pictures so crappy?” you ask. “Crappier than usual?” That would be because I was busy flinging bread through a crack in the window as hard as I could to draw them away from the car, and pictures became a lower priority than rolling the window back up before another fur-covered, ropey-drool monster could shove its head into the car, snot all over everything, and rip our arms off in the hunt for bread. Toward the end, when we were completely out of bread, I saw the largest bison by far on the side of the road and tried to take his picture, which drew him over to the car and enticed him to try and snap off our sideview mirror, which was both exhilarating and terrifying. I guess I don’t understand this almost frenzied desire for whole wheat bread, because I find fiber boring. However, once I broke off a sideview mirror while backing out of the garage and thinking about pie, so while the objects of our desire may be different, our game is the same, bison friends. I bet if I really tried, I could eat a piece of pie in one bite, too. I’d high five you if I wasn’t scared that you’d eat my hand.