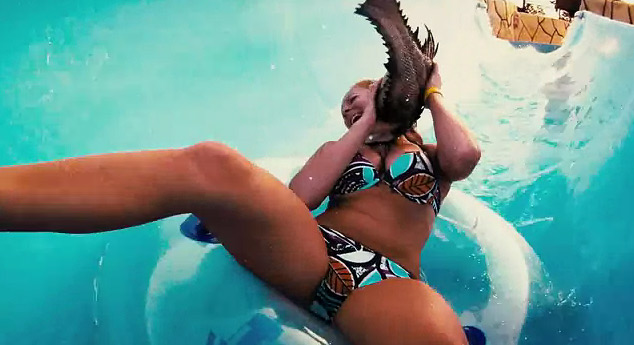 This year is turning into “the year of the movie in the theater” for me. Usually, my drive to see a movie is lower than my drive to avoid being surrounded by humanity and their cell phone lights and rustling wrappers, but not this year: Avengers, Cabin in the Woods, Prometheus, The Dark Knight Rises, The Expendables 2, The Hobbit, Snow White and the Huntsmen…and Piranha 3DD. This last one I had fully intended to see on Sunday when I discovered that it was not playing in a single theater near me. And not “not playing in the theater five minutes from the house” near me: not playing within 80 miles of me. Not playing at all, anywhere in this state. All in all, Piranha 3DD is only playing in 75 theaters nationwide. In order to see Piranha 3DD in the theater, I’d have to grab a passport, hop on a ferry, and watch it in Victoria B.C.: Canada coming through where the United States has clearly failed me.

Now, I almost considered it–a ridiculous trip for what was sure to be a ridiculous movie, plus Canada has delicious candy, but I also took a moment to investigate any other options. If I had Comcast, I could watch it via OnDemand, but Jason and I both think it’s stupid to pay for cable tv when it’s mostly comprised of wretched made-for-TV movies, 30 year old movies with anything remotely interesting edited out, home shopping, commercials, and infomercials. I could pay to watch it through Facebook or YouTube, but watching it on a relatively small screen with notifications blinking at me felt less than ideal. Then Jason discovered that we could stream it through Xbox Live: WE HAVE A WINNER.

It was worth every second of hassle. I truly don’t understand why it’s getting such negative reviews–yes, critics are practically required to hate horror-comedies because the genre doesn’t beautifully depict the human condition via a plastic trash bag blown to and fro by a capitalist wind, but that’s not the job of the horror-comedy. The horror-comedy’s job is to beautifully depict the human condition via the juxtaposition of blood and fake boobs. Sex, death, and fart jokes: the holy trifecta.

Piranha 3DD hits every single one of its targets–ridiculous monsters, great gore FX, delightfully stupid people, and a number of moments in which I was desperately sad that we weren’t watching in 3D as this is a movie that hearkens back to classic 3D tactics, none of this tasteful Avatar 3d where “You forget that you’re watching a 3D movie.” NO. This is campy magic, and I’m sure it’s even more magical when it’s thrust into your face. Riotously funny, at one point I commented to Jason that I was having difficulty deciding whether this was the movie of the year or the movie of the decad-BAM. Annoying child decapitation: MOVIE OF THE CENTURY. 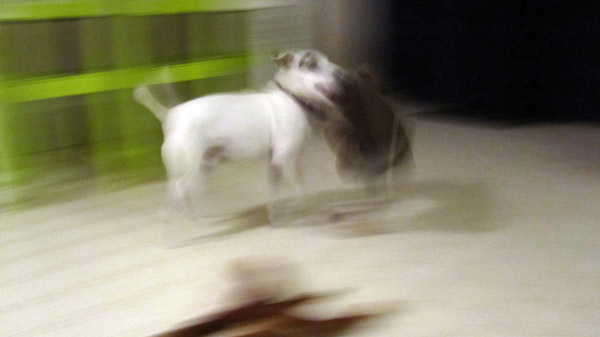 I fixed all of the Napoleon-killed stuffed animals we had in the house today, sneaking them downstairs underneath my shirt (dogs are so stupid, he didn’t suspect a thing until I accidentally squeaked my new massive third breast) and gave them all to him at once.

He is the happiest dog in the world right now–he can’t decide which one to play with so he’ll run off with one only to come back to jealously guard the pile as if it might disappear at any moment and then select a new favorite.