Not long ago, my friend Rob hosted a BBQ in honor of everyone’s favorite made-up holiday, Titmas. In an attempt to be a good guest, I asked if I could help with anything, and he handed me a bag of jalepenos and asked me to cut them in half, de-seed them, and fill them with cheese to go on the grill. My friend Emily took care of the cutting, and Jason was in charge of filling them with cheese, so I got down to business with the de-seeding, and we all had them done in no time. While performing this task, I made an offhand remark that jalepenos were really not much hotter than green peppers, and this, for the loyal and careful reader, is what’s known as foreshadowing. Or comeuppance, for those with a strong sense of justice.

We ate and then sat around and chatted. After a while, I began to notice a burning sensation in my fingers and around my mouth. I excused myself, ran my hands under some water in the kitchen, and rejoined the group. The burning sensation grew. By the time we left for our second engagement of the day, my hands felt like they were composed of rods of flame, and my upper lip was prickled with droplets of burning sweat. We stopped along the way to purchase some milk, which I lamely dribbled over my fingers in the parking lot, fully aware of how ridiculous I looked, so I stopped and brought the rest of the milk over to Tristan’s.

Tristan and Jason ended up discussing some new game while I was perched over the kitchen sink, cupping milk into one hand and dipping my lips into it, attempting to join the conversation by burbling my responses through the milk. Even after the milk was gone, my hands continued to burn, throbbing through True Blood and beyond. Jason did some online research and suggested I coat my hands in rubbing alcohol and then wash them with the hottest water I could stand. The rubbing alcohol brought temporary relief, but the hot water brought the pain back with a vengeance. I ran rubbing alcohol over them again, and the pain subsided for about thirty minutes, and then began creeping in again. I tried aloe, which helped for about five minutes. I somehow managed to get to sleep, and when I woke up in the morning, I didn’t feel any pain.

…Until I rubbed my eye, which immediately began tearing and burning. During the day, I would forget that my hands were still instruments of pain, and I’d again accidentally touch an eye or put a finger in my mouth and the pain and burning would begin anew. On our way to Zumba class, I told Jason that it didn’t matter how many times I’d washed my hands, they were still coated in burning oils, and he refused to believe me. Eventually, we stopped at a red light and I crammed one of my hands into his mouth. He recoiled (not from the inherent grossness of having a hand jammed into his mouth) but from the burning sensation. “You weren’t kidding!” No. No, I was not. If only more arguments ended this way: “You don’t want me touching your radio dial? Fine, suck on this!” …I suppose it doesn’t work for most situations.

The important thing is that I learned a valuable lesson about being helpful. Namely, that I shouldn’t do it. 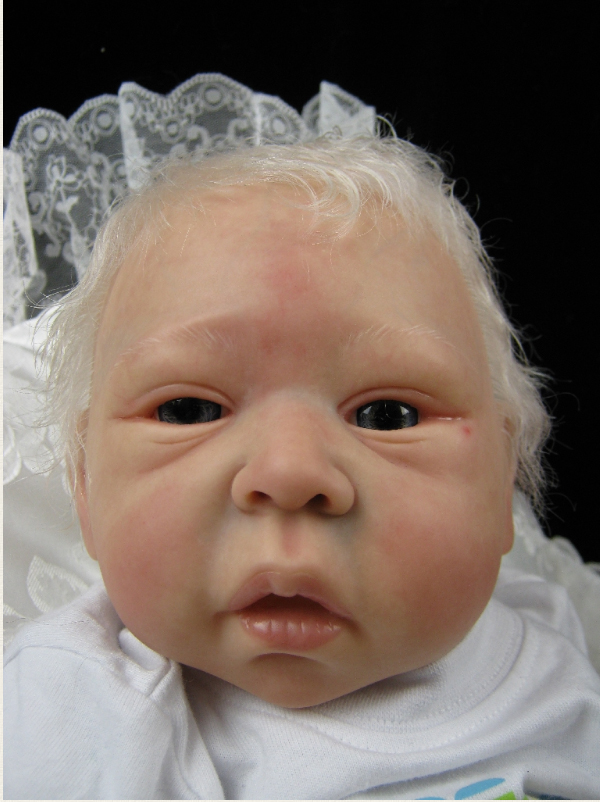 After the most recent Harry Potter movie was released, a number of “reborn” Harry Potter characters went up for auction on Ebay. If you’ve never heard of the reborn phenomenon, they’re very lifelike dolls that are collected and cared for by their owners as if they were real infants, oftentimes having a separate nursery in the house for it, changing its diaper regularly, and taking it on trips to the grocery store or out for walks in a stroller. Occasionally women will have them made to resemble what their own children looked like as infants. Separate breathing and heating apparatuses can also be added for the most lifelike doll imaginable, and will only serve to make the encounter extra awkward when you compliment a woman passing with a stroller on her child’s cuteness, only to realize it’s made of latex.

So on to this Harry Potter Reborn thing. I understand, Harry Potter is a cultural phenomenon AND a cash cow, so it makes sense that people are trying to cash in on it while they still have the opportunity, and nevermind pesky things like licensing and ownership of the characters. But is there really a lot of crossover between the two fanbases? Apparently there was at least one, and thus these nightmares were auctioned on ebay: The Voldemort one is wrong; he didn’t get freaky features until after he started in with dark magic, so there’s no reason for him to have snake eyes as an infant, unless the creator was trying to depict his “birth into evil”, in which case wouldn’t this have been more accurate? But rather than nitpick these works to death, I’ve decided to jump in myself on one of these moneymaking ventures and unveil my plans for new line of reborn Twilight dolls. Limited edition! Get yours today! 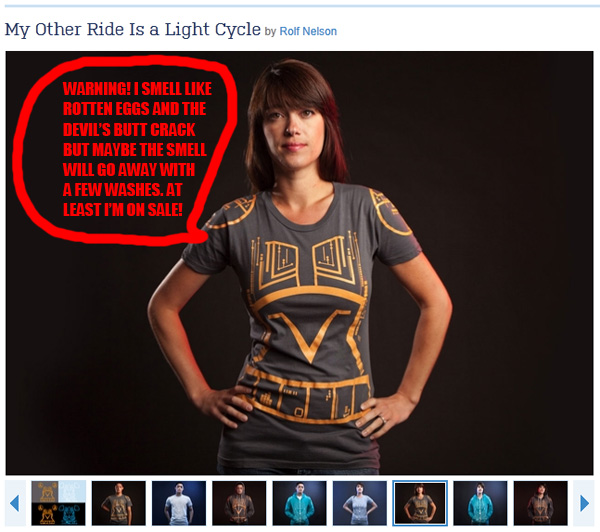 One of the few Christmas gift ideas Jason had for me last year was matching t-shirts for us; a commitment step I was not yet willing to take. In relationship hierarchy, matching shirts comes after moving in together but before marriage, and, a scant two months into our relationship, we weren’t there yet. Sure, put your hands wherever, but stay out of my closet!

But, wanting to make him happy, I compromised. Instead of matching shirts, I bought us coordinating glow-in-the-dark Tron shirts–the light for him, and the dark for myself. The day of our pre-Christmas gift exchange, I wore it to work, carefully styling my hair with a fancy new product. I ended up having to do some work in the warehouse, building up a light sweat, dampening my clothes and hair. It was then that I began to catch subtle whiffs of a foul stench. I did an armpit check–that wasn’t it. I did a surreptitious crotch check–no swamp ass. Where was the smell coming from!? Oh god, it must be my hair. Something about that new product interacted with my hair chemistry and now my head smells like rotten eggs!

I spent the rest of the day downwind from coworkers and rushed home early to wash my hair before Jason’s arrival. But as we sat there, watching Sharktopus, I smelled it again, a combination of rotten eggs and the devil’s buttcrack. I began sniffing at my hair, and all I got was shampoo. Lowering my nose, I sniffed at the shirt, and reeled away from the vomitous odor. It was the shirt all along! What could possibly make a brand new shirt reek so badly?

The next day, I scrounged my apartment for quarters and washed the shirt five times. After drying, it smelled fine, so I felt confident enough to wear it to the post Christmas party I had with Aisling and Chris, but while dancing, it got damp, and the stink started anew, now working its way into the fabrics of my OTHER shirts.

What in the stinky hell IS this shirt? I emailed Threadless, telling them I couldn’t wear a shirt that made me smell like a crotchety dude’s mailbox after he gave out pennies on Halloween, mentioning that a friend had experienced a similar odor with HIS dark Tron hoodie, and asking for an exchange for a non-stinky tee.

Threadless wrote me back, saying that there is an odor associated with their glow inks, but they’ve found it dissipates after a few washes.

Funnily enough, it seems like that’s worth a mention on their site. They talk about potential print imperfections, why not inform a customer there’s a potential they’ll become a social pariah after an afternoon spent exuding pure stink? But, I persevered. I washed and washed and washed and washed the shirt, finally believing the power of detergent had won out over the stench of sulphurous ooze. I wore it on our beach house vacation this summer without issue…until I realized I’d forgotten to pack a towel and dried myself with the shirt. The damp shirt went back into my bag, and when I unzipped the bag later that day, a finely woven thread of stinky eggs emerged to greet my nose.

Fuck you, Threadless. Fuck you and your smelly shirts.