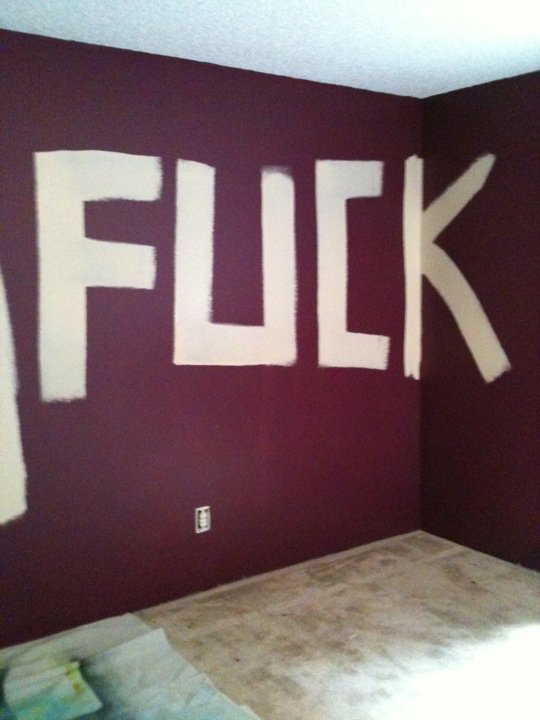 Why is it that you need to give an apartment back cleaner than when you got it? In order to properly move out and not incur horrendous move-out charges, I had to paint my apartment back to icky tan from the happy saturated colors I’d painted it when I first moved in. I suspected that it might take more than one coat to cover up what I’d done, particularly in the rich purple bedroom, but I doggedly set myself on the task. After I’d finished one wall and moved on to the next, I had occasion to glance up at the first wall and found it completely patchy, dark in some spots and light in another. “Jesus fucking fuckballs,” I muttered, and went over the dark spots with more paint, evening everything out. Later, I looked up again, and there were yet MORE dark patches in areas that I’d SWORN I’d gone over earlier. “SON OF A FUCKING GOATCUNT” I stalked over and painted these spots AGAIN. Only after the first completely demoralizing day did I realize that the paint dries darker than the can shade and it wasn’t a spotty painting job on my part but the paint drying unevenly. WELL WHAT DO YOU KNOW.

I took out some rage on the walls, anyway. I’m glad I was able to leave my mark lingering under coats of paint forever or at least until this apartment slips down the cliff and onto the highway below (they still have not fixed the landslide issue from earlier in the year).

Now with the paint and some help from an amazing carpet cleaner called “Folex” (seriously, if they do not have a slogan, I would like to suggest “This shit is magic”), it looks like I never lived there–and this is two years of living with a dog who actively works at defiling as much surface area as possible when he yaks. Once again, this shit is magic. Well, it mostly looks like I never lived there. I decided paying $5 each to replace two oven burners was worth saving the agony of trying to scrub them clean–but other than that, it’s like new! 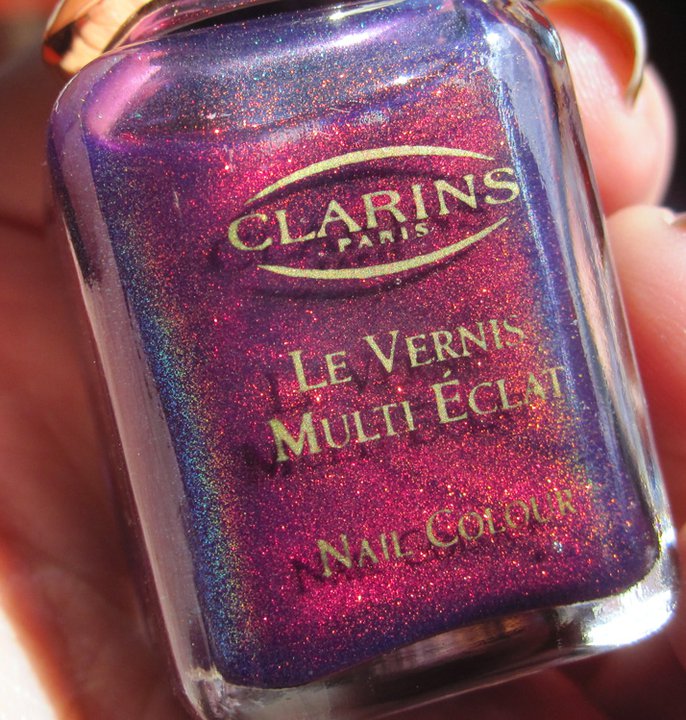 Sometime in March, Jason revealed that he’d purchased my birthday present “months ago”, in an obvious attempt to torture me with anticipation. Trust me, this sort of thing works on me in spades. And lo, I writhed. But instead of just agonizing, I spent a solid month making guesses. Not necessarily serious guesses because I have a feeling he would not lie to me and say I’d gotten it wrong if I’d guessed it right and I’d feel badly to spoil his surprise, but guesses nonetheless. We were checking out at Fry’s electronics when I said “I know–you got me a unicorn, right?” and his answer changed from “Nope!” to “I…uh, will neither confirm nor deny” and I knew I was onto something. I needled him relentlessly. “You got me a unicorn stand mixer? Where it dips its magic horn into the dough and twirls it into bread?” “…Do those exist?” “God, I hope so.”

So, I wasn’t right about the unicorn stand mixer, but I was right about the unicorn. He got me Clarins 230 for my birthday, a long-discontinued nail polish also known as Unicorn Pee for both its rarity and overall magic sparkly qualities. Supposedly the multichrome pigment used to make it doesn’t exist anymore and can’t be recreated, which makes it highly sought-after and not something I figured I would ever own, because hell, even when I was gainfully employed I was not about to drop that kind of change on a nail polish. I was so excited when I saw the bottle that I did a little dance and maybe had a little tinkle in my pants. I had offhandedly mentioned the existence of Unicorn Pee forever ago and he searched the internet until he found me a bottle. I wore it this entire week, and every time I looked at my nails, I was reminded of how much I am loved. In sunlight, the glitter looks like dancing burning embers on the nails. In artificial light, the green flash becomes more apparent. This is over two coats of BUTTER London HRH, a red-toned medium purple with blue and red shimmer. 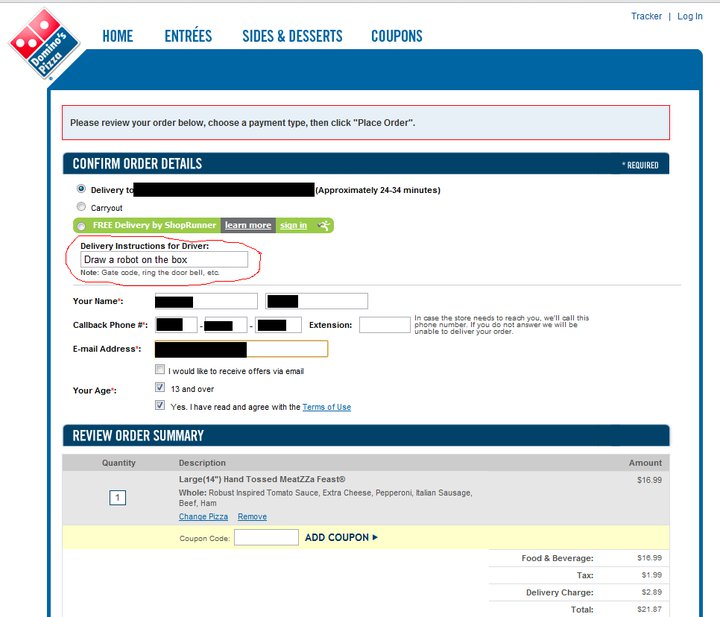 I got home yesterday after finishing painting and cleaning my apartment to the point where it looks like I never lived there save for the hat which fell behind the hot water heater that I can’t figure out how to retrieve, and I was exhausted. Tired, and dirty, and hungry. Too tired to cook. Too hungry to graze on crackers. Too dirty to be seen in public.

So Jason ordered us a pizza, along with some special instructions. And when the pizza arrived: