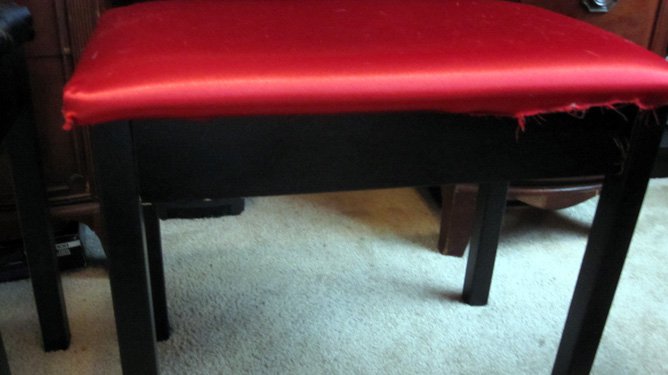 Many thanks to everyone who has reached out to me this week, via text, email, phone call, etc. Everyone’s kindness and support has made a difficult week a little easier, and even though I still feel nauseated and scared and my brain keeps whirring about unfairness and things I could have said and didn’t, it’s not as bad as it could have been, and I thank you all for that. Jason has been a rock for me this week, getting me to eat*, getting me out of bed/out of the house, encouraging me to exercise to keep my spirits up, and being supportive and understanding when simple things frustrate and upset me and push me close to the edge of a screaming, crying, way-overreacting “I’m gonna be homeless” tantrum.

I’ve been trying to keep myself busy. Friends have tipped me off to some jobs and I’ve sent out a few resumes, I’ve boxed up and sent out most of my physical movie media for trade-in at Amazon (something I’d been meaning to do for a while and additionally lessens the load when I decide to/have to move), traded in a big bag of books at half-price books so my bookshelf will stop leaning meanacingly, and have been doing other organization/cleaning tasks around the apartment.

On Tuesday, I took some beautiful thick brocade fabric I’d been saving for over a decade that I bought when I was in Taiwan and reupholstered one of the piano benches I’d bought for a penny from Guitar Center. I’d originally intended to make a top out of it, but a decade had come and gone and the top went unmade and had it been made, it probably would have gone unworn, so it was time to put it to use. I’m also working at getting better about how long I save things for undefined “project” use–if I find myself saving something using the same excuse used by someone on Hoarders, I set a timetable to actually use it, and if doesn’t get done, that stuff gets donated or binned, because I don’t have unlimited storage space for a lifetime of “someday”s and this has motivated me to start and FINISH doing things that otherwise could have been put off indefinitely. I only wish I had enough fabric to reupholster both benches, but I’m sure I’ll find some that I like just as much for the other bench at some point.

*Also his presence keeps me from binging on everything in sight. Hello, eating disorder, I did not miss you. 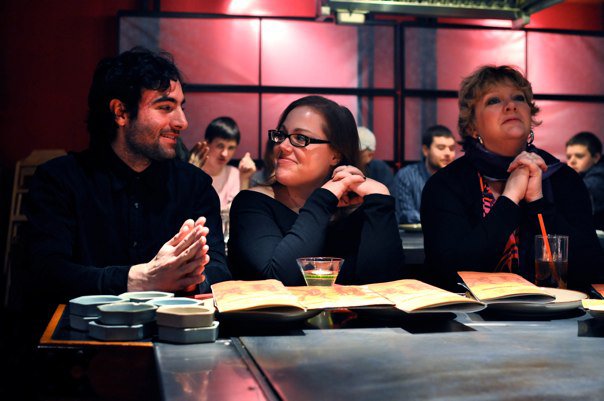 On Saturday, a group of us went to Benihana’s and then to Gameworks to celebrate Chris’ 30th birthday. Jason and I had gotten to the restaurant a bit earlier than everyone else, as we’d been out at Archie McPhee, picking up a copy of the “Mr. Bacon’s Big Adventure” board game to give to Chris, a former vegetarian. Though our entire party had arrived on time, we didn’t end up being seated until nearly forty-five minutes past our reservation time, at which point I was maybe a little pickled as I’d only eaten toast that day in anticipation of a ridiculous dinner. Our chef was very nice and told us he’d gone to school in Hawaii. Excuse me, but I believe I’ve found my calling in life: teppenyaki chefdom. But only if I also can attend school in Hawaii. Stuffed full and swearing that we’d never need to eat again, we walked from the restaurant to Gameworks for the all-important task of shooting dinosaurs, zombies, and robots to prepare for the dinobotbie apocalypse. Each spinosaur I shot down was in tribute to Chris. While there, we discovered one of the most fun arcade games ever: Deadstorm Pirates. It’s a booth style game which includes two force-feedback gun turrets and a ship’s wheel between them. You play as two pirates with “golden guns”, and when you shoot an object together, their power and speed increases. The story is a typical pirate adventure in that you’re battling for some nebulously-defined treasure–the important part is that you get to shoot hundreds of skeleton pirates who explode into bones and dust in a very satisfying way, a kraken, giant crabs, a giant snake, and a pirate who stole his jaw from a Predator. You also get to shoot down other ships with cannonballs, and I may have cackled with delight upon firing a cannonball every single time. Also, unlike the majority of other arcade games, you can actually beat this game in a reasonable amount of time for a not-insane amount of money. Oh, certainly, it was taking money from us like clockwork, but it didn’t ramp up the difficulty (or, like most shooters: cheapness) to a point where it would have been foolhardy for us to continue putting in money, which is a point that I think most arcade games miss. I won’t keep paying to play if it’s obvious that the game is set up in such a way that I’ll never win.

After we beat Deadstorm Pirates, we played the horseracing game, where you pick which sire and dam you’d like to make a baby, and all of a sudden a stork comes along with a brand new foal for you to name and love and race. Our precious baby was named Jerkface.

We put Jerkface through various training exercises to make her grow big and strong and fast. Unfortunately, one of those exercises was swimming her in a pool to increase her cardiovascular health. The instructions were that we were to reflexively tap a button when a bar moved into a certain area and, ominously, if we did it wrong three times, our horse would drown. That’s a sizeable punishment for error! Once you’ve selected a mode, there isn’t a way to back out and choose something else, so I was committed to do right by our child.

…The bar moved very, very quickly, and each time I missed, we would gasp in horror as Jerkface struggled and her sweet little jerky face went underwater. Upon the third miss, I cried, “Oh my god, I killed our baby!”, and sure enough, they showed the horse spasming and lurching in the pool and slowly, slowly stilling. NOOOOOOOOOOOOOOOOOOOOOOOOOOOOOO!

And just like that, she was ready to race. What? I thought we drowned her! I guess in the racing world, drowning is not a permanent thing. All of that grieving, for nothing!

After you’ve finished playing, the game spits out a little card that represents Sarah Jessica Parkeryour horsey child, so you can come back at any time and continue playing instead of having to start anew, presumably up until the time your horse is grey and needs to be shot in its stall because its record is too crummy to justify putting it to stud.

Even though I was the babykiller, somehow I still got custody. 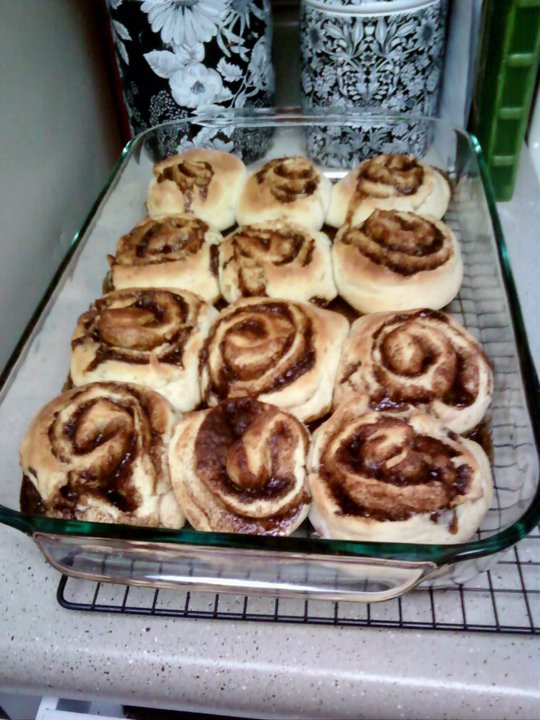 Fateful words, uttered one lazy day while watching Man vs Food, which is how I ended up spending my Saturday morning glaring at dough. The challenge? Cinnamon rolls.

I figured they’d be really easy, given that I’ve made other pastries in the past relatively easily. What I didn’t plan on was trying to make dough rise in a chilly apartment. What the recipe doesn’t tell you is that cinnamon roll dough is made of the stickiest substance on earth, stronger than duct tape, superglue or even Superman, sticking to the bowl and to the knife and to my fingers and to the counter. “Lightly dust the counter”, the recipe says. Lightly dust? There isn’t enough flour in my canister to prevent this dough from nigh-permanently bonding with my countertop, which was something I discovered AFTER spreading the dough with a metric buttload of butter, sugar, and cinnamon, when I attempted to roll it up and instead of rolling, it ripped and tore and made a hell of a mess and I invented at least three new curse words.