Let’s start with the things I’m thankful for today:

Today, I am thankful for industrial-strength garbage bags.

Today, I am thankful for rubber gloves.

Today, I am thankful for the cast-iron stomach bestowed upon me by my father.

Because today when I got home, I saw that the dog had a shitsplosion in his cage. I didn’t actually know that it was possible for one dog to shit that much. Not only was his bedding completely and utterly destroyed, but he himself was entirely encrusted with shit. Hindquarters, belly, face, all caked with shit. You might be thinking “Poor Napoleon” at this moment, which would make you a better person than me, as I continue to think “Poor ME”. So, I had to dispose of his bed and scrub out his cage, and give him a bath, and the whole time he’s having a bath, he’s trying to lick me and wagging his tail like “Oh wow, isn’t this fun? I mean, it started out bad, but it’s cool, right? Because this is totally my favorite thing. Why aren’t you smiling?”

If this whole escapade has taught him that all he needs to do to get a bath is to shit all over the place and roll in it, I will continue to be thankful for industrial-strength garbage bags for when I dump his corpse into the green river. 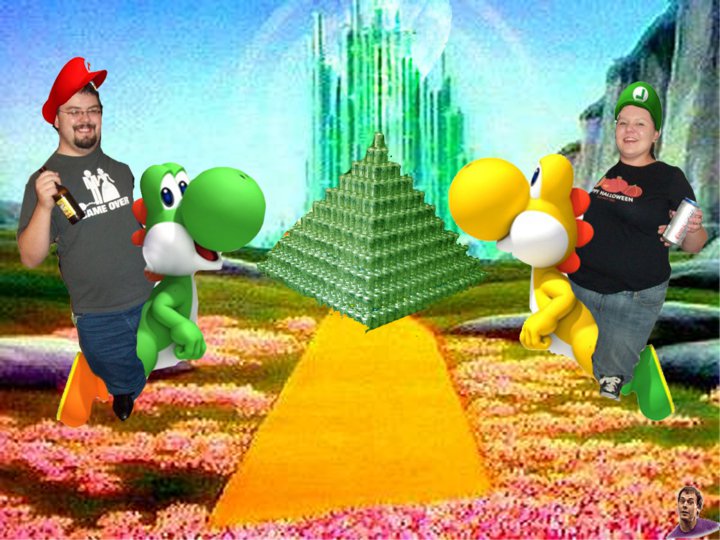 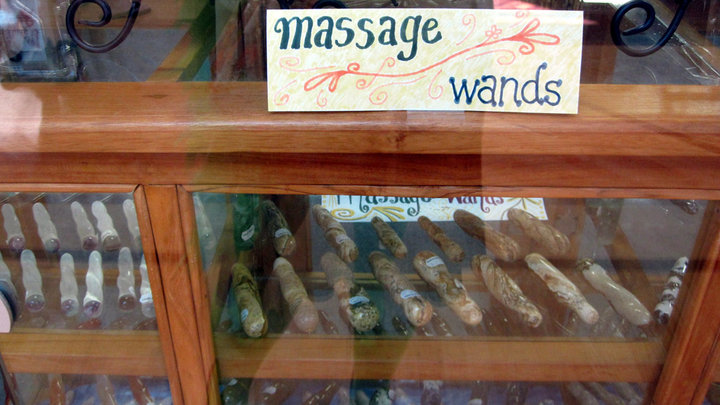 On Saturday, a large group of pasty-white people (the better to glow with, my dear) assembled and visited the Auburn Supermall, making it the largest crowd that particular mall has seen since 1988, for the express purpose of playing blacklight minigolf. I had offered to have people over to paint their faces with UV-reactive makeup, and I myself had intended to do a glowing neon sugar-skull mask, but as the hours crept by and no one showed, I decided to go for something a little more subtle, as I didn’t want to be That Douche in public.

I was That Douche in public regardless, as while we waited for stragglers to show, I volunteered to test out the hurricane simulation booth, because if I didn’t do it, who would, right?

My hair was a series of very fine knots for the rest of the day.

We also noted that the nearby Hippy-Dippy-Do-Dah store sold suspicious-looking ‘massage wands’. Sean takes his minigolf quite seriously–the glowing hat and glasses make all the difference in the world…if we were keeping score. Which we weren’t. I learned an important lesson that day as well, namely, that it is incredibly difficult to minigolf while wearing a feather boa, which tends to wrap around the handle of the club and choke one just as one is taking an important shot. The course itself was designed by a sadist who hates minigolfers–the very first hole involved a bridge under which the ball got stuck nearly every goddamn time, forcing the golfer to their knees and use their club like a pool cue. The course was also set up in such a way that balls tended to shoot off-course and toward other people in the venue. I sincerely feel that if three wolf moon can be a thing, five glowing sharks should also be a thing. There are five of them! And they’re glowing!

At the end of the course, there was a hole set up like minigolf pachinko–if you managed to get your ball into the orange hole, you’d win a free game. I didn’t actually get that far, as, completely disenchanted with the course and choking myself with feathers, I declared myself done and handed over my club and ball at the counter. Rob, however, won a free game! After golf, we made our way to Shindig for delicious booze, and then over to Emily’s for dinner and board games–first we played Quelf, which was both ridiculous and highly entertaining–we were dancing jigs and making animal noises and holding hands and singing songs and even had a round of group therapy, and by the time we were tired and slap-happy, we started playing ‘Things’, where each round, everyone wrote down their answer to card prompts like ‘Things you shouldn’t do in a graveyard’, ‘Things you would do you if you were invisible’, ‘Things you shouldn’t experiment with’, etc. My name popped up frequently as a ‘thing you would do in the dark’, a ‘thing that is dirty’, and so on and so forth. Eventually we even started recycling slips, and the phrases ‘donkey punch’, ‘pepperoni’, ‘fuck a ghost’, and ‘electricity’ started popping their way into most rounds.

…Something is seriously wrong with my friends.

Which is why I love them, of course.