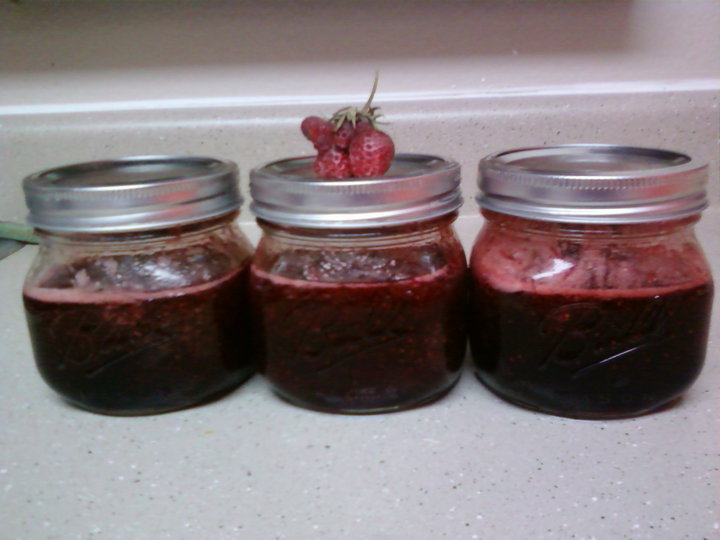 Last night I made strawberry jam and a strawberry-rhubarb pie. The jam-making went just fine, though with strawberry mixture AND water boiling for a good long while, my apartment felt like a Roman bathhouse. I hadn’t quite realized how hot it had gotten in my place–when I opened my freezer, cold air billowed out visibly, which is normal-ish for a freezer. Not so much so for a refrigerator, which also puffed out clouds of cold air. By the time I finally got the dough and the filling ready for the pie, it was approaching 11pm. I don’t know if it was a failing of the recipe or a failing of my own at that point, but I remember thinking that it seemed like too much filling had been made, and not quite enough crust. The liquid in the filling crept out over the edges, which made me a little concerned, so I used a baster to remove some of the juice. I covered the edges in foil and popped it into the oven. Thirty minutes later, tendrils of smoke started curling out of the oven.

Maybe a little filling dripped down and it was burning off.

Why oh why doesn’t my oven have a peep window so I can see what’s going on inside? Oh right, because it was manufactured in the seventies when that icky almond color and faux wood paneling were sooooo chic and window ovens were a dream of the distant future, like sex robots and video games where you could actually tell what the sprites were supposed to be.

Still hovering on the edge of panic, I walked over to the oven and cracked the door to see if perhaps I’d managed to conjure up Satan, and found something MUCH more horrible. The filling had ERUPTED out of this pie. Filling everywhere, rapidly growing in volume like The Blob, wrapping itself around the heating elements and smoking like a prisoner in front of a firing squad. I had two choices…potentially underbake the pie or burn down my apartment.

Burn down the apartment.

They both had their unique appeal.

Eventually I decided that burning down the apartment could have some consequences I wasn’t fully cognizent of at the moment, given the amount of smoke I’d already inhaled, and pulled out the pie.

The foil around the edges did a marvelous job…of pulling off the outer crust.

It might be edible (I haven’t tried it yet), but it sure isn’t going to win any pie beauty contests; the swimsuit round will kill it. Either way, I know what I’m doing tonight. 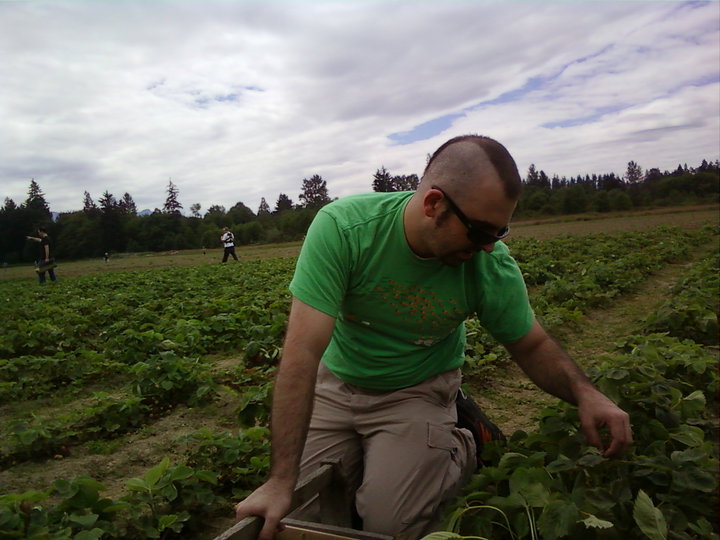 On Sunday, Tobie and I went strawberry-picking at Remlinger Farms in Carnation. Madamecacoon had posted about going picking earlier in the week and how amazingly delicious and worthwhile her excusion was, and I’ll be damned if I wasn’t going to get in on some wonderful strawberries at a dollar a pound. At first we were a little disappointed; the area seemed picked-over and not worth the trip, but we found a row that had been virtually untouched, and we went to town.

I picked seven-odd pounds of strawberries and ended up with a lot of schmutz on my hands; Tobie remarked that if space aliens were watching us, they would think we were an unbearably cruel species, given that we were plucking the genitals off of another species. Which I suppose means my hands were full of junk-juice.

These strawberries are amazing. They’re tiny and odd-shaped, but unlike the enormous, gorgeous berries sold in the supermarket, these are wonderfully juicy and flavorful. Tonight, I’ll be making strawberry jam and at least one pie. 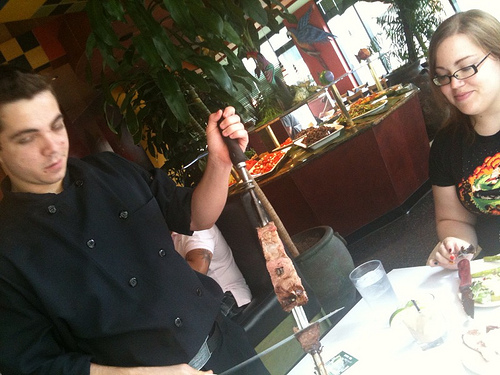 On Saturday, Tristan, Tobie and I went for lunch at Ipanema, specifically, rodizio. I’m feeling lazy, so let me blatantly copy-paste what I wrote about it last time:

They brought us sword after sword of meat–pepper steak, parmesan pork, spicy sausages, The Most Tender Chicken On Earth, garlic steak, tri tip, sirloin, bacon-wrapped steak…I can’t even remember it all. Tristan asked if we’d ever eaten so much we’d gone temporarily blind, and it seemed like if it was ever going to happen, that would be the day. Our organs were all crammed full of meat, even ones outside of the digestive tract. Our lungs were full of meat. Our sinuses were packed with meat. My uterus was storing a pound of pepper steak. And still the handsome waiters kept circling. All I could think was, “What’s happening to me? There’s still food, but I don’t want to eat it. I’ve become everything I’ve ever hated!” Even attempting to summon up the competitive spirit of Eater X could not convince me to eat even one more bite, aside from the fried banana. And the remainder of the veggies on my plate. But that was it, I swear.

We had intended to have rodizio the week prior, but who would have thought that the Brazilian restaurant in which one can watch the world cup would be completely full on a day in which Brazil played in the world cup? Not me. Whooooops.

You know how in movies including submarines, there is almost always a scene in which the pressure gauge moves up into the red zone while klaxons sound, indicating DANGER DANGER DANGER while a man in a uniform runs about frantically because there’s very little he can do about the situation? On Saturday, there was a tiny uniformed man running about in my digestive tract ineffectually while my stomach blared ah-WOOGA! ah-WOOGA! ah-WOOGA! and yet the gauchos kept circling with more meat. One inquired as to whether we’d like pork, and Tobie countered by asking if the server liked pork. The server replied, “No. I am a Jew.” which probably should not have made us laugh, but we did, if only because he’s doing the devil’s work–serving unclean animals on the Sabbath, even! After lunch, I was too full to even think about doing anything strenuous, so we watched a bad movie and took the dog for a walk in the beautiful afternoon sunshine. Evening snuck up on me faster than I would have believed possible. One of my coworkers was having a housewarming party that day, and he let me know that I was on a very limited coworker guest list–he invited all of the people whose company I enjoy and left off all the people who drive me insane with rage. It was a nice gesture to let me know he thinks well of me as a coworker, and I wanted to at least drop in for a short while to reciprocate. As soon as I walked in the door, they tried to hand me a plate with a burger and a hotdog on it, and just looking at the food made the tiny uniformed man send out all the warning signals again, at which time I poked myself in the stomach and gave him a severe talking-to about real danger versus imaginary danger. I didn’t intend to stay very long, but then people started swapping stories–being locked in a Federale prison, getting into/getting out of/breaking up fights, shirts being ripped off at ruckus Hell’s Angels parties–my coworkers are vastly more interesting than I’d ever given them credit for being!