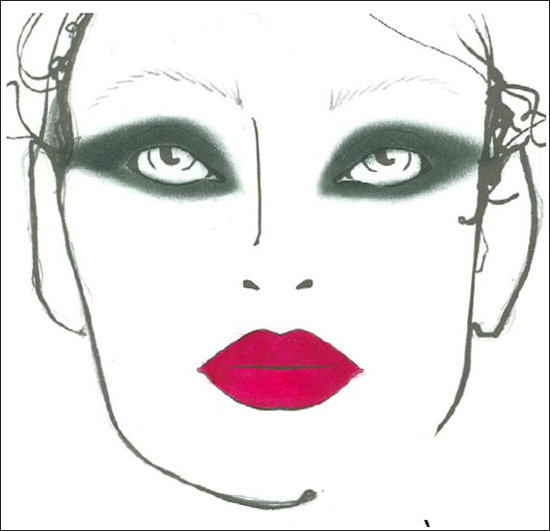 You know, it’s not often that ‘prostitute’ is openly admitted to being an inspiration. Gee, the clothes are nice, but you know what would tie everything together? Just a smidge of whore. Not 1990s Julia Roberts Hooker With A Heart Of Gold whore, but a more classy sort of starving rabid raccoon whore. Perhaps we could have them walk to ‘Money (That’s What I Want)’, too? Or is that too whorish? One thing’s for sure–we need overdrawn red lips or we risk our models with deeper eye sockets looking like Skeletor.

So let’s see it in action– I just…wow. Wow. I suppose if they wanted the clothes to look beautiful by comparison to the jacked-up things they’ve done to the models–horrifyingly unflattering makeup, frizzy hair…THOSE BANGS, then jolly good show, L.A.M.B.. The problem is we can’t not look at a trainwreck. I look at that picture and I don’t even see the clothes. 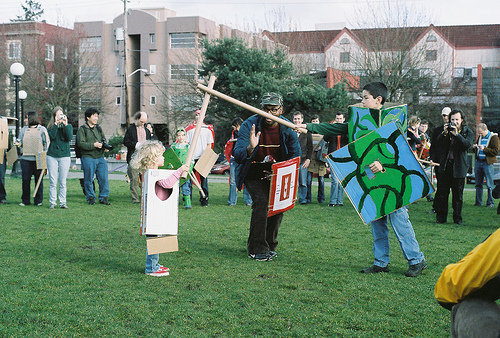 On Sunday, I attended the cardboard tube duel in Cal Anderson Park, because if there’s a better way to work out misplaced Valentine’s Day aggression than hitting someone with a tube, I certainly haven’t heard about it.

Cardboard armor was encouraged but not required, for which I was thankful. Because while I will wear a lot of things on the bus, up to and including full Santa regalia, cardboard armor is where I draw the line. I know, given the whole robot costume thing, you’d think I’d be all over it. Maybe next time, when I can transport it in a car, folks, and don’t have to drag it all over the city. However, you were not allowed to bring your own cardboard weapons; any outside tube was considered contraband and had to be handed over prior to the duels.

I was signed up in the ‘Naked’ division, which is a sexy way of saying non-armored. Before they divided up the Armored, Partial Armored and Naked groups, they held the children’s tournament, because there was no other division more likely to draw blood, and we all had cardboard tube bloodlust. This adorable little pixie took two swings and after the challenger whacked her solidly in the huggies armor, she decided she’d had enough and ran back to mom. Her little brother started to sob as mom suited him up in his cardboard box, wanting none of this action. It’s surely a topic that will come up in therapy twenty years from now.

After the kids failed to bruise and maim one another, we split into our respective groups and took business into our own hands. Cardboard tubes are not the sturdiest of instruments, and since the fight only lasted until one tube was broken or bent at 45 degree angle, they were all over relatively quickly. In the lovers’s duels, they were encouraged to keep fighting until the tube was entirely destroyed.

When my name was called, I strode into the center of the ring and seriously told my opponent, “We must fight to the death, or they will kill us both.”

She did not like that one bit, and screeched every time I took a swing at her, eventually falling to the ground. My tube was broken on her defensively placed forearm, and lo, I was out of the tournament, so I meandered up the hill to watch the armored division fights and wait for the melee.

One guy got cracked in the face and got a bloody nose. From a tube. The guy on the left ended up taking home the championship trophy, as his finishing move was consistently knocking the tube out of his opponent’s hand and then stomping on it until it broke. Not exactly sporting, but not against the rules, either. The only rules were: hold your tube at the end, avoid face-hitting if possible, and no jabbing.

After the tournaments came the melee, where everybody was to grab a tube, or two, or part of a tube, and just wail on one another. The very moment they cried ‘GO!’ for the melee, and we began running and screaming at one another at the height of cardboard bloodlust, the skies opened up and it began pouring. Within seconds, we were soaked to the bone, slipping in mud, and STILL smacking one another around with soggy cardboard.

When all that remained was limp paper bits and defeated participants, that is when Frank texted me to ask if the fight was still going on. Yes, Vomit Date Frank was supposed to attend the duel, but missed it owing to one: his night owl schedule and two: not feeling particularly well. If he can give turning into a living vomit fountain a pass, I can excuse this sort of lateness. He asked if I’d still like to get together and see The Wolfman, and I agreed that sounded mighty fine. On my way to the theater, I ended up having to buy a hoodie so I would have something warm and dry to wear so I wouldn’t freeze in the theater for two hours.

Before the movie started, we had some time to catch up, and when I asked him if anything new and exciting was going on, he said he would be in Vegas in two weeks. “Really?” I exclaimed. “I’m going to be in Vegas in two weeks.” As it turns out, we’re going out on the same flight, so I will have a seat buddy in whom I do not have to fake an interest for a few hours. What are the odds!?

On Saturday, I went to Ipanema with Tristan and Daniel for Rodizio. Daniel’s vegetarian girlfriend was out of town for the weekend, and thus we felt it was right and natural to cram him full of meat, like Atkins on overdrive.

They brought us sword after sword of meat–pepper steak, parmesan pork, spicy sausages, The Most Tender Chicken On Earth, garlic steak, tri tip, sirloin…I can’t even remember it all. Tristan asked if we’d ever eaten so much we’d gone temporarily blind, and it seemed like if it was ever going to happen, that would be the day. Our organs were all crammed full of meat, even ones outside of the digestive tract. Our lungs were full of meat. Our sinuses were packed with meat. My uterus was storing a pound of pepper steak. And still the handsome waiters kept circling. All I could think was, “What’s happening to me? There’s still food, but I don’t want to eat it. I’ve become everything I’ve ever hated!” Even attempting to summon up the competitive spirit of Eater X could not convince me to eat even one more bite, aside from the fried banana. And the remainder of the veggies on my plate. But that was it, I swear.

I stared at the table and groaned while the boys continued to eat. Eventually, they flipped the card on the table, signalling ‘OH GOD NO MORE’ to the waiters, and we cracked wise that I would go off to my afternoon meeting with Lurch smelling like Eau de Au Jus*.

*Yes this phrase is completely and utterly meaningless in French but I maintain that it’s funny and punchy regardless.