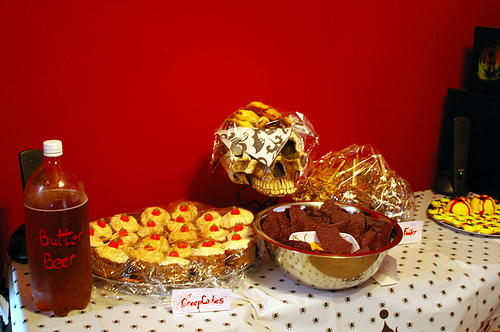 Sunday was the fifth annual pumpkin stabbing at Casa de Dildarian; Saturday was lost entirely to prep work. If you would have told me beforehand that I’d be up until 3am scraping jalepenos and handpainting details on gelatinous eyeballs with food coloring and a tiny brush while watching 21 Jump Street, I’d have called you a stinking liar. The next day, I would have been far too tired to apologize.

You see, I believe in feeding people when they come over for an event. Not feeding them WELL, necessarily, and by well, I mean healthily, but feeding them theme food. It is important that I stuff as much theme as possible into my guests. I couldn’t say exactly WHY it is important to me. It just is. And it is not nearly as important to other people to provide concrete RSVPs, so I had to prepare theme food to feed between nine and twenty-one people. NINE AND TWENTY-ONE. That’s sort of a gap. Sort of a significant gap. So I spent all day Saturday prepping a LOT of food:

-Caramel apples (I know now why they cost so much in stores; they must have a ‘danger’ surcharge tacked onto each one because hot caramel hurts a lot when it splatters on your skin. A LOT.) (PS I have a ton of vanilla beans left over from a different food project and so I scraped some vanilla caviar into the caramel sauce and it made it about twelve different kinds of amazing.) -Fresh grated pumpkin cupcakes -Witch finger shortbread cookies -Decayed corpse chips & Sweet and Hot Pepper Salsa (This stuff is like salsa crack. Last year, people practically licked out the bowl.) -Freshly flayed flesh jalepeno poppers -Mummy dearest dogs (also known as cuter pigs in blankets) -Beastly brie en croute with a puff pastry spider on top -Roasted squash & garlic dip -Gelatinous eyeballs -Blood & Guts sammiches (turkey & cranberry on croissants) -Butterbeer -Hot cider You can tell I ran out of steam right about the time I said ‘fuck it’ and used teacups to make two giant eyeballs instead of carefully refilling the truffle trays with a turkey baster, waiting a few hours, and painting more irises. Anne and Jim ended up begging out of the pumpkin patch portion of the day, owing to the Steeler’s game, and Aisling needed to work up the energy to get out of bed as she was getting over feeling sick. So I met up with Tristan, Eric, and Jessica at the patch to go corn-mazing and pick pumpkins. The two mazes this year were shaped like a werewolf and a tombstone, respectively–on the werewolf maze, we decided that we would test the method of taking all lefts to see if that worked to get through the maze. We missed all but one of the punch stations, but sure enough, left-ed our way out of there. On the tombstone maze, we decided to utilize the map to reach all of the punchstations; after we reached the last station, Tristan decided we ought to put our maps away and try to find our way out without them, which resulted in us ending up walking past two punchstations we’d done already and eventually having to pull out the maps in shame. It really wouldn’t be a party without shame involved in some fashion. Afterward, we picked out our pumpkins and drove back to my place so I could begin the process of stuffing everyone full of fun to the gills. If they did not have gills already, it was extra handy to have all of the carving tools nearby. Aisling made what Jim dubbed a ‘Jap-o-Lantern’. Yes. We ARE going to hell. If you laughed, you’re coming with us. I dressed Napoleon up in his jack-o-lantern doggy t-shirt, which is irresistably cute. Anne attempted to call him over to her, but he refused to walk on the plastic dropcloth, so all we ended up with was photographic evidence of a little more shame. This year, I ended up using a pattern because my creative juices were on empty. I also fail at taking photographs of the day, and I blame exhaustion because I myself remain blameless. Napodog was zonked out, too; he’d had a big day of sniffing and licking and freaking out near the front door and shameless begging and stealing Aisling’s turkey sandwich and gobbling the whole thing in one bite.

Mom: “Honey, I was just calling to see what you want for Christmas.” Mellzah: “I want to decide who lives and who dies!” 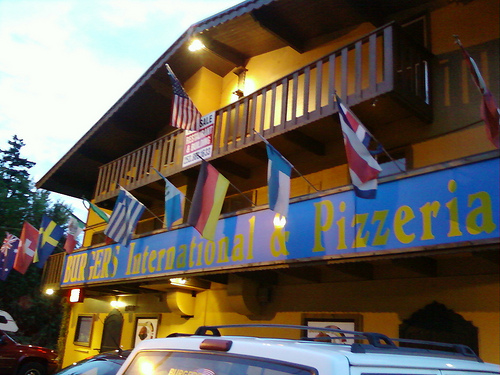 On Sunday the 18th, I took a trip to Maris Farms with Amber and Mana to visit their Haunted Woods attraction. I’d wanted to get there early enough to take a monster truck ride and see the pumpkin trebuchet and all sorts of other things, but I became engrossed in something and didn’t end up getting there until 5:30, at which point, I got to wander around for half an hour until they closed, pet some teeny-tiny goats, squee over the teeny-tiny racing pigs, and then leave because my Haunted Woods ticket was good for 8pm and they don’t want people there more than fifteen minutes early.

So, I left to go buy dinner somewhere nearby to pass time, and ended up at a place called ‘Burgers International & Pizzeria’ which I FULLY intended to mock. Fully. Because what meal could possibly be less international than burgers? Friends, I had to make room for my snotty words in addition to my meal when I saw the menu. It was organized by country/continent in terms of where the meat originated. Yakburgers from Nepal. Ostrich from Africa. Kangaroo from Australia. Llamas from…somewhere. Also, specialty ‘burgers from the sea’. Exotic meats AND mocking Jessica Simpson: This place has EVERYTHING. But that wasn’t all. International burgers is owned by Austrian Baron Manfred and Baroness Ingeborg von Vierthaler. They handcraft their own schnitzel. And I am certain that if Baron Manfred had been around for me to pledge allegiance to him, he would surely sport a bitching mustache, an eyepatch, a dashing grin, and he’d tell me that he slays all of the animals his patrons gorge on with his bare hands.

Guess what I got, guys? Guess! A BLACK BEAR BURGER. The waitress tried to talk me into something more similar to beef for reasons unbeknownst to me–perhaps Baron Manfred was tired and didn’t feel like wrestling yet another bear. Or perhaps she’s sick and tired of people complaining when the taste of the exotic meats isn’t exactly what they thought it would be. Either way, I would not be deterred. I ate half of Winnie The Pooh (who was delicious), and I saved the other half for Napoleon so he can brag to the other dogs when he goes to Dog Hell that not only has he eaten a bear, he got someone else to do all of the hard work of killing, cleaning, and cooking for him. Truly, he will be every dog’s hero.

I imagine I’ll find myself there more than is entirely healthy, considering they gave me a punch card–buy 12 burgers and the 13th is free–and they serve an awful lot of animals that I’ve never had the opportunity to consume before.

I met up with Amber and Mana back at the farm near 8, and ended up having a really good time despite the group in front of us that walked so slowly that we kept catching up to them and having scares ruined by the girl in that group that yipped like a chihuahua at every opportunity and then started messing with exhibits to, I don’t know, prove she wasn’t scared AND that she was a total fucking asshat. She became known to our group as Dog Girl and it was a total shame that we didn’t get it share that with her.

This time, Amber and Mana pushed me to the front of the group, and I must admit that they even got a few womanish screams out of me, and a vibrating plate in the ground nearly caused me to jump straight out of my stompy boots. The only gripe I’ve got about the haunted woods themselves is that one of the indoor portions was pitch black, which would be fine except I ended up feeling up some poor employee while fumbling about blindly in the wrong direction–if you’re going to send a group through somewhere COMPLETELY blind, there probably ought to be only one direction to travel in. Though that could have been the point–for a while, it seemed like there were two people attempting to separate the group and lead us in different directions. However, being total girls, we clung to one another and eventually blundered our way out after someone stuck a feather in my mouth (perhaps revenge for my totally unintentional knocker-grabbing).

All in all, it was a totally worthwhile trip, and next year, I will definitely be going back for monster truck rides in addition to the haunted woods.