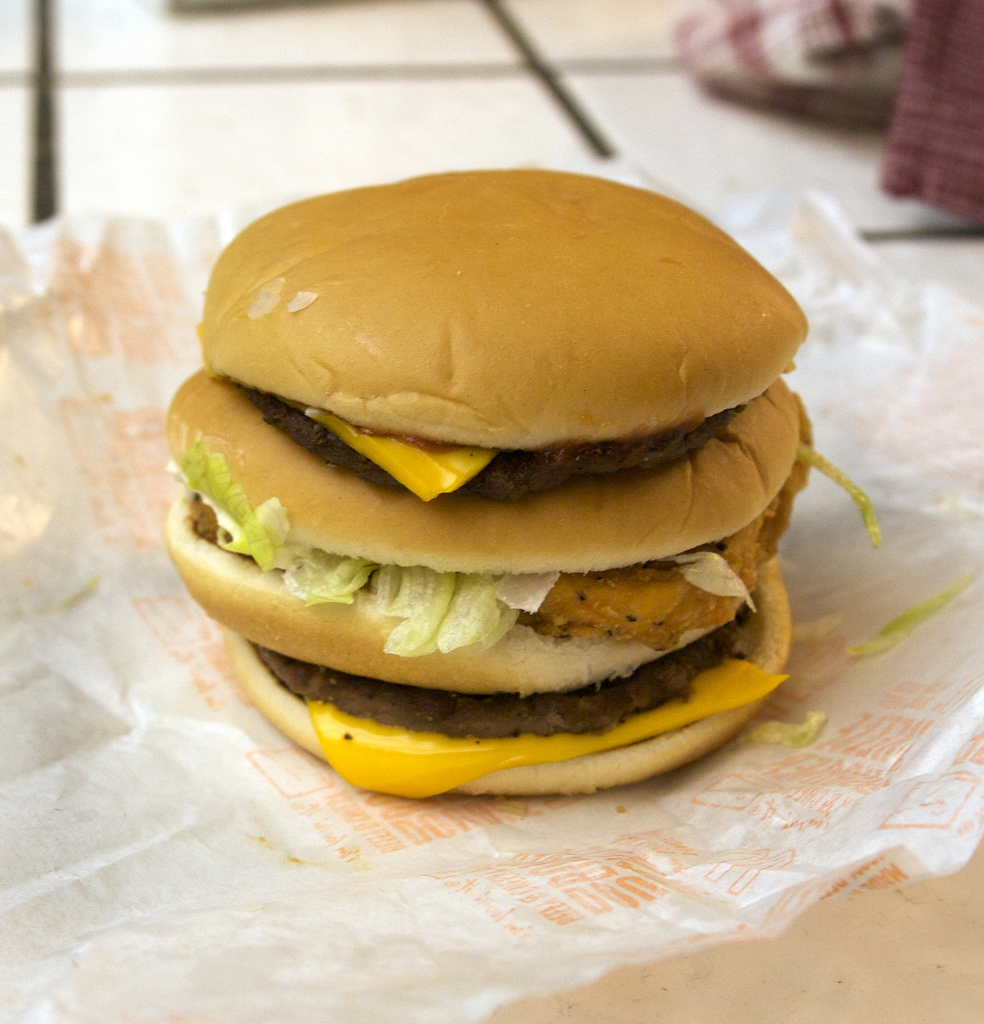 The McGangBang: A chicken sandwich stuffed inside a double cheeseburger, with lots of mayo

I just got back from the optometrist, and shockingly enough, my vision has IMPROVED over the last three years instead of worsened. Perhaps I do not yet have to resign myself to waking up one day, utterly blind.

After the exam, they laid out my options according to my insurance: they’ll cover up to $120 for glasses frames plus 20% off any amount above and beyond $120. They’ll put $15 toward my lenses, and since I require high-index lenses and edge-rolling so as not to have a coke-bottle-y appearance, I’ll have to pay ~$100 above what insurance will chip in. So base on glasses is ~$100 plus whatever frames I decide on.

Contacts, for now, are out of the picture. The insurance website made it sound as if they cover contacts entirely, minus the fitting charges. Realistically, they pay ~$100 and I’m immediately out ~$500 plus the continued cost of purchasing more disposables–so I suppose we’ve determined my interest level in contacts, and that level is below $500. Though it would be awfully freaking nice to be able to see just ONE HALLOWEEN OUT OF A DOZEN.

Having decided on glasses, the receptionist? assistant? at the optometrist’s took it upon herself to try to pick out frames for me, after I told her what I loved about my current glasses. Everything she picked out was met with a resounding ‘NO’; I don’t know what my current frames tell people about my taste, but I can tell you that diarrhea brown with electric green? NOT MY TASTE. Before today, I’d never seen recycled baby turds, but now that I have, I can quite CLEARLY tell you that it’s NOT MY TASTE. It became increasingly difficult to turn down this woman’s choices politely, and finally I said “Look, I have been accused of being nigh-unreasonably choosy. I have known my tastes for twenty-seven years, and you have known me for less than an hour, so not to offend you, but I don’t think you’ll be able to pick out something that I’ll like.”

…This woman was not a quitter. So I laid out my ground laws: I don’t want rimless, I don’t want wire frames, I don’t want anything round as it not only makes me look rounder in the face but owlish besides, I want a frame that’s thick enough to break up my face visually to give it interest and look less full but not dominate it (I don’t want the glasses to wear me), I prefer metal over plastic as I have a narrow-ish bridge and nosepieces help them stay on my face, I prefer a rectangular shape but am open to cat-eye styles and since this is to be my primary pair, I want a neutral color. Yes. I know. Very fucking picky.

And yet she kept handing me brightly-colored hugely thick plastics or ultra-skinny wire frames. I found ONE PAIR that I sort-of liked–for $567. Damn these birth control pills, I actually felt myself starting to get upset and hovering on the precipice of weepy over the idea of walking out with expensive glasses that I didn’t love. I asked about the possibility of finding a frame I liked outside of the shop and then ordering it through them–no, that was not a service they offer. I inquired about finding frames I liked and bringing them in to be fitted for lenses–she looked at me rather belligerently and said “Well, *that* won’t be covered by your insurance.”

When I asked her to please measure my pupilary distance, you’d think I’d just sprouted some grotesque appendage from some unspeakable orifice and presented it to her to be given a tongue-bath. She said, and I quote “Oh! You’re being sneaky–you’re going to order glasses from the internet, aren’t you?”

Her mouth was still gaping when I left.

On Saturday, while everyone else was BBQing and preparing to light off fireworks, I was de-zombiefying and re-human-being-ifying in order to meet up with Marie, whom I hadn’t seen in eight years. She moved to Vancouver, BC about three years ago, we found each other on Facebook about two years ago, and though we planned on meeting a few times, something always came up–the last time she was in Seattle, I was busy escorting ph34rtimmybunny around PAX. The last time I planned to drive to Vancouver, my car broke down. This time, she said she was visiting Seattle for one day, and that she was moving to Switzerland in three weeks, so this was really our last opportunity to get together stateside, and I sure as hell was not going to miss it. Not for all the fireworks and barbeques in the world. The fact that I wasn’t invited to any is really beside the point.

We met at Twist in Belltown (you know, the place with the giant mirrored disco pig dangling from the ceiling!), and she introduced me to her wonderful husband Paul, and another friend of hers who was visiting from France. We talked about our lives, our jobs, travel, old friends, and some escapades we had in Taiwan, and how our time there has affected our lives going forward. Neither of us spoke a word of Chinese when we arrived, but I didn’t know that Marie *also* didn’t know a word of English (I suppose it was arrogant of me to assume that she would have!). I am incredibly impressed that she managed to make such great strides with two languages over the course of a year; now, she talks like a native speaker. Marie also got into trouble at school–the only classes she attended were art class, gym class, and ‘how to be a good housewife’ class, where they taught her how to apply makeup, clean the house, cook, oh yes, and how to fire a gun in case mainland China attacks. She got banned from the school swimming pool because she jumped in and her classmates didn’t know how to swim, so the school decided she was dangerous. She also figured out how to get to the roof of the library to do some topless suntanning and smoking.

We only got to spend a couple of hours together before they had to get back on the road, but I’m so very happy that we did. We hope to try to organize a 10 year reunion for all of the Debbie Kids in 2011, and between the two of us, we’re thinking a meeting in Europe would be best as it’s the closest for the majority, travel-wise. I hope we get it together; it was just chance that brought us all together the first time, but the connection we all made was something truly special.