v1c1ous has been training to hike up Rainier this year (higher than Anne and I went), and has thusly been taking hiking expeditions on the weekends. On Saturday, he decided to go up a trail on Rattlesnake Ridge, and I invited myself along, because that is what I do.

When Sean arrived, he asked if everyone had eaten breakfast so no one would get dizzy and pass out–because no one wanted to use their beautiful Saturday explaining over and over to the police why their once-vibrant friend was now a corpse impaled on a broken tree trunk about halfway down the mountain. I didn’t LIE and say I had eaten…but I also avoided answering the question. It’s not that I have a deathwish, but rather, since my surgery, it’s always a gamble as to how my body will react to my first meal of the day, and thus I tend to put it off as long as possible. It’s like playing an awful game of roulette, where 30% of the time I’ll win the big prize and get to feel like a normal human being, and the rest of the time varies wildly between cold sweats, nausea, shaking, and praying to the porcelain god. Of course, the longer I put it off, the worse my odds become, but I wanted to have fun with my friends without having to worry about being in the middle of a hike and all of a sudden having a desperate need to hug a toilet.

As usual, I traveled light. Some may call it ‘unprepared’. I call it Traveling With A Mind For Survivalist Adventure And Relying On Group Resources, also known as Flailing Girl Mooching From Others. This time I didn’t even bother to bring a camera, as the proprietary battery in my lighter camera wasn’t charged (DAMN YOU, NIKON!), and my DSLR weighs approximately as much as a small child.

I’m not going to lie to you. I could certainly be in better shape, there is no doubt about that. But at no point beforehand did I have even the slightest niggling thought that “Hey, maybe this will end badly.”

This is typical of the Mellzah experience. I am overconfident, overzealous, and a bad artist. (The below is from a different day of Hiking Fail, because I’m also bad at learning lessons.)

I was gung-ho about this. I was excited to be outside, excited to be with friends, and furthermore had some sort of asinine point to prove about how fatties aren’t bloated gastropods and could exercise out in the sunshine just like anyone else. Thus, I led the charge up the trail. I would like to note that occasionally, I can be wrong. Occasionally, I like to wave a big stick around without the proper ammunition to back it up.

I still maintain that I’m good at walks over distance, and much longer distance than the actual trail; what killed me on Saturday was the elevation. About halfway up, the backs of my legs started burning, and I fell to the back of the group. Shortly after that, I really started lagging. Shortly after that, I was overcome by the feeling that all of my muscles and internal organs were dancing a jitterbug inside my body in order to best express their rebellion against my cause, and their dancing caused me to begin to see spots. It was about this time that I informed the group that they were free to leave me behind to die the undignified death of a fatty who tried to pretend she could exercise, and once they returned from the top, if they could just roll my corpulent mass over the edge to be eaten by the squirrels and cockroaches, that would be swell.

Tristan was kind enough to wait with me whilst I regained control of my limbs, and we hiked the rest of the way to the top together. It was really, really beautiful. Afterward, we all went back to the Fortress of Nerditude for a bbq, I managed to repel nearly everyone with a fruit salad, and I believe only one actual vegetable was present at the table, which by most counts constitutes a success. Even their raccoon came out from underneath the porch to visit for a while. After dinner, I needed to scoot out pretty quickly so as to get home and shower before I was supposed to go see Dead Snow with mrsamedi. On the way home, my body let me know that thanks to my First Meal Of The Day, it had different plans, and that I was to spend the rest of my Saturday lying on the couch in a cold sweat with the room spinning around me.

I can’t wait until I can get a robot body. Seriously, guys. This is the last motherfucking zombie nazi movie this sack of meat, organs, and crap is going to make me miss. 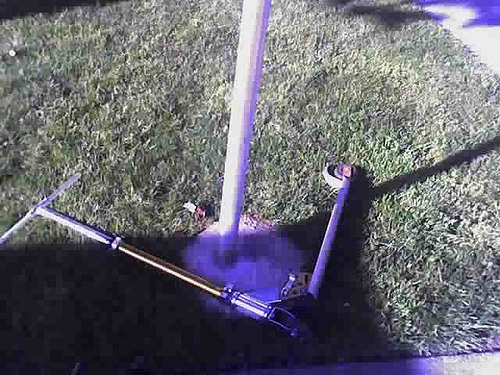 We have roving gangs of kids on scooters in my apartment complex. Actually, I think a scooter pops out of every mom’s womb between kid and afterbirth in the city of Kent. One of these kids left his prized possession/birthright out last night, and I decided I couldn’t resist the temptation to take it for a spin.

Anyone who happened to look out their window around 10:30 last night would’ve seen me careening around corners and jumping off of speed bumps. Frankly, I don’t care if people think I’m acting like I’m 7 instead of 27, that was ridiculously fun and if it’s still out there when I get home, I’m doing it again.

Now that the weather is cooperating, I plan to actually learn how to use my Heelies so that I may terrorize actual adults in grocery stores as I go whizzing down the aisles. 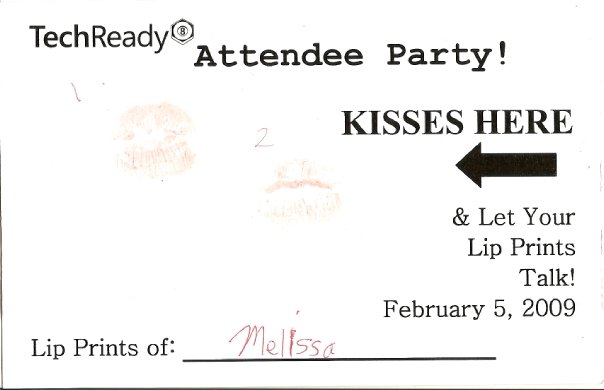 In February, I attended a Microsoft Party with Jez. Well, well, well, I am finally getting around to post about it. Here at Mellzah Entertainments, Inc, we are committed to lightning-fast reporting about moments of interest by which I mean lightning-fast when I discover the paper that I wanted to scan that had been hiding under a stack of unread Servo magazines.

Soooo for this fancy schmancy party, they rented out Quest Field. On the field itself, they had a soccer game, a few football-styled bounce house athletic events, and a bit where you could attempt to kick a field goal. I was wearing inappropriate shoes, so I was saved from that humiliation. However, I got to hold the ball for Jez, who continues to blame me for his slipshod performance and lack of an “I’m A Sports Superstar” medal to take home and show off to his supercrush.

Inside, they had bands performing, a karaoke area, a 360 game room that was totally dominated by dudes, and temporary tattoos. I almost, almost convinced a man from Germany to get a temporary tattoo tramp stamp but he bailed at the last second. Jez got a fish, and as per my white trash leanings, I got some bitchin’ snakes on my forearm. We then went and got photos taken that got posted to the MS internal network and thusly I have never seen them–Jez posed with the cheerleader pom poms and made a fetching kick, and I did the Heisman pose with a football. JEZ, I WANT THOSE PICTURES.

We wandered around a bit and happened upon a ‘Lipsologist’ station–now, I’m not a believer in much, but I AM a believer in getting people to do things that they find embarrassing and stupid, so I roped Jez into doing this with me.

This Lips Scientist had a bunch of white cards and lipsticks laid out on a table with the instructions that you are to apply lipstick and kiss the card at least twice. So far, so good. Except I didn’t have any lipstick on me as I wasn’t carrying a purse and I’ve already learned my lesson about keeping them in a pocket, and there’s no way in bleeding hell I’m putting used lipstick on my face. I might as well jam my tongue down the throat of everyone there and play Herpes Roulette. I found Jez one that looked brand new and still wiped off the top layer to safeguard him from strangers, and I kissed my card with the remnants of whatever I’d put on before I left the house. Jez went first, and she told him a bunch of stuff about him that he didn’t agree with, like that his relatively large lips mean he lives life big and bold, that he’d be a great public speaker/entertainer, so on and so forth. (P.S. She wrote my name, not me. I know how to spell my own name, thank you very much.)

When I handed her my card, she gasped and grabbed me a chair. “You have ghost lips“. But what does that mean? Sooooo ‘ghost lips’ mean I’m exhausted. Overworked, frenzied, etc etc etc and not that I didn’t have any fresh lipstick to wear, amirite? The Lips Scientist must have assumed, by virtue of my attendance, that I am a Microsoft employee (HA!) and thusly that I put in 80+ hour weeks; she told me that I am to take a vacation by myself ASAP and do NOTHING. Which, frankly, sounds like one of the deeper pits of hell to me. By myself? No way to communicate with anyone else? Doing nothing? Hi, I will go stir crazy and murder someone by the second day. No, madam, I need to get laid. That is what I need.

I honestly don’t remember what the last two bits on the card were in reference to, but it’s exceedingly kind of her to note any stretch marks that I may or may not have, and their normalcy.

She then told me that had my prints not been so light, she would have gone further in depth about how I am obviously a gifted storyteller, with a demanding and exacting personality, and not even slightly a cheap date. This stuff? Sure, I’ll buy it. The ghost stuff, not so much.

She then handed me her business card and told me that whenever my boss lays something on me that’s too much, I should feel free to tell him no, because my Lip ScientistDoctor told him I’m supposed to be living stress-free, and he can call her to verify. I have not done this thing as I’m not overwhelmed by the urge to have all of my coworkers view me as a dingleberry.

The important lesson here is that I can be mistaken for someone who works at Microsoft.