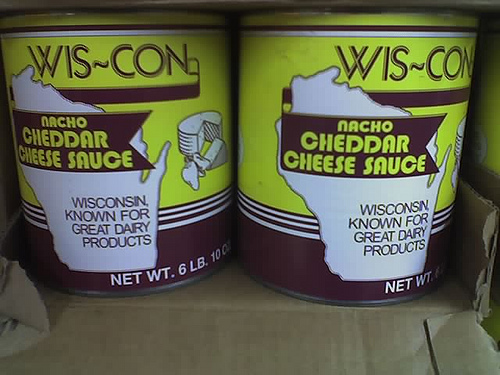 Poll #1264063 Culinary Adventures Open to: All, detailed results viewable to: All, participants: 33

Would you eat this?

What is the best way to consume six POUNDS of fine nacho cheese?

With a high-pressure super-soaker filled with said cheese. 6 (18.8%) 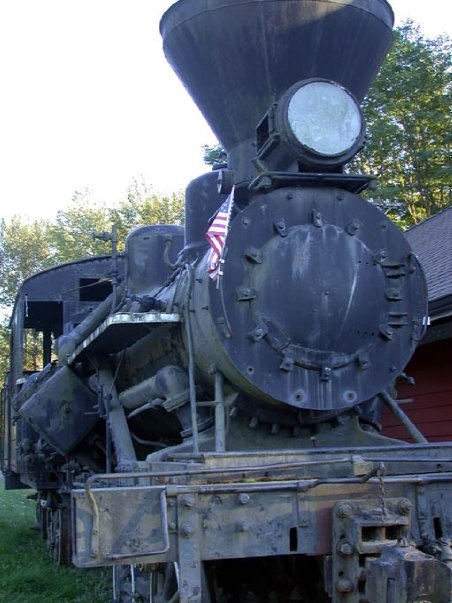 On our way back from the mountain, Anne and I made a series of mistakes, culminating in disaster. I wanted to stop in the wee town of Elbe, to take pictures of the big spooky train and Hobo Inn for uncledisgusting. This was mistake number one. It was around this time that we both realized that we were very, very, very hungry, and hey! One of the trains is a diner train! Mistake number two. When we approached the door, there was a sign that enthusiastically proclaimed they had the best food on the mountain. There were some important things that we didn’t consider. Best compared to what? Trashdiving behind the visitor center? Can you trust anything written on a impermanent surface such as a whiteboard? Not asking these questions? Mistake number three.

When we entered the train, it was like a goddamn Precious Moments store had exploded, spraying everything with a fine mist of creepy eyes and disembodied heads. Not turning around and immediately leaving? Mistake four. The dining area looked like something out of a John Waters movie, if only he were a bit more twisted; and immediately after we ordered, we noticed we were surrounded by the three most annoying Cs in existence. Loud wailing children, annoying lovey couples, and country music. I’m pretty certain Anne didn’t believe me when I whispered to her that the people seated across the train aisle to my left were acting like the tiny diner table was an enormous chasm for their love to cross, but she and I nearly died laughing when they pulled the waitress aside and asked to be moved to the lounge so they could be seated next to one another instead of across.

The wait for our food was interminable. I started asking Anne if we could please, please, please ditch before the food showed up, because I was pretty convinced that nothing good could come of this venture. Anne is much more good-hearted than me, one of those ‘born with a conscience’ types and resolved to ask the waitress if they’d made our food first instead of just running out into the night. Mistake five. The waitress snapped that it was almost done, and came out bearing plates of what should have been lasagna but instead were congealed brown masses of…brown flavored swill. Brown sauce? Brown noodles? Entire garlic cloves?What the hell kind of foul lasagna was this? Both of us were incredibly hungry, yet neither one of us could manage more than a couple of bites before pushing our plates away in disgust. I’ve never had to fight harder to keep my lips together when the waitress dropped by and asked how everything tasted. ARE YOU JOKING, LADY? This is the food of the damned! This food is too cruel and unusual to be served to prisoners! What sort of sadistic wench ARE you? She swooped by our table and asked if we wanted to take home our leftovers in a large foil swan–this, I momentarily considered as I thought it might be humorous to take a giant carving knife to the belly of the foil swan to expose the rotten lasagna guts, but I thought better of it and decided I did not want the car to smell like that wretched food for the remainder of the trip home. As soon as the check was paid, we practically ran out of the place and gunned it to the nearest gas station* for mints to rid our mouths of the foul lasagna coating. So, what have we learned? Do not stop in creepy little towns for any reason. Any cutesy meal place with a theme is going to be rotten. Anyplace that proclaims to have ‘the best’ ANYTHING is invariably lying. If a place is bad, it does not necessarily have to get better; we have not yet plumbed the depths of awful. Do not be plagued by matters of conscience when doing otherwise means feeling vaguely ill for two days afterward. I could hardly believe it–almost down the mountain, and the FOOD is where we make the misstep.

*Wherein I witnessed the most wondrous/horrifying Harry Potter velvet painting, but that’s neither here nor there. 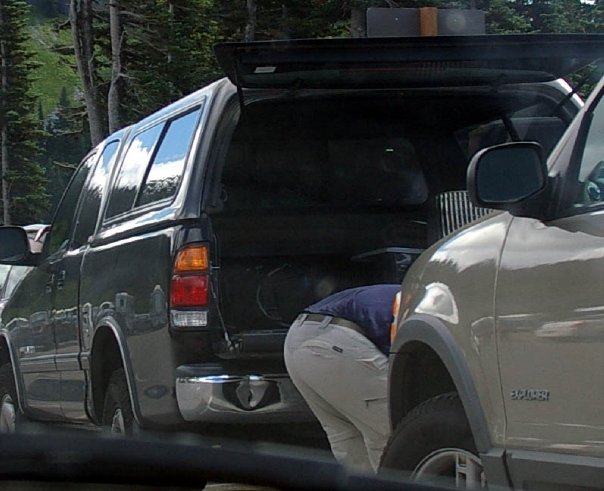 On Saturday, poetrix618 and I hiked up Mount Rainier. To prepare for this outing, I checked out the national park website, which went a little bit like this: One does not simply walk into Mount Rainier. Its black gates are guarded by more than just orcs. There is evil there that does not sleep. The great eye is ever watchful. It is a barren wasteland, riddled with fire, ash, and dust. The very air you breathe is a poisonous fume. Not with ten thousand men could you do this. It is folly. But if you DO decide to brave it, you should bring: a map, a compass, a flashlight, extra food, extra clothing, rain gear, first aid supplies, a pocket knife, matches, and a fire starter. ‘Tee hee!’ we giggled, and packed cameras, tylenol, and a bottle of water apiece. ‘We are survivalists!’ Thus begins our fateful journey, wherein we came to a compact beforehand to eat one another should Anne’s snack size bag of Doritos not provide adequate sustenance and we were required to resort to cannibalism, and we each made a secret promise to ourselves to push the other in front of a hungry cougar, should one appear. Or maybe that was just a promise I made to myself. But before all that, we needed to find parking. We must have waited near the Pacific Northwest’s answer to Mr. Rogers for fifteen minutes while he changed his shoes, packed up his dorky hiking sticks, removed his ultra-dorky hat with the hanging cloth mullet down the back, and zipped his pants off at the knees to turn them into shorts. Not once in this entire time did he acknowledge us, though we were clearly waiting for him and his super passive-aggressive ass to leave. As he bent over and fiddled some more, obviously enjoying our frustration with him, I took a photo of his sweaty ass in order to mock him more thoroughly on the internet, where my power resides. As you can see, he has sweated a river down his back, creating a delta near his asscrack, much like the one near the base of the Mississippi River, and likely as alluvium-rich, ensuring a diverse ecosystem of asscrack bacteria. SEE WHAT YOU GET FOR IMPEDING ME, SWEATY ASSCRACK MAN? Ahem. After we finally found another parking spot, approximately a mile farther down the road, we shook our fists in his general direction and proceeded to the Henry M. Jackson Memorial Visitor Center for trail information and a high-quality cafeteria lunch. From their informational kiosks, like the one pictured below, you might be inclined to believe that Mount Rainier was named after some dude who wore x-ray spectacles long before they were in vogue. I tell you here and now that is a lie. Rainier is Squamish for ‘Cold Filtered’, and I’ll prove it to you: After the park ranger warned us about the numerous recent black bear sightings, we went on our way up Dead Horse Creek trail. It was glorious. The fresh scents of earth and trees and wildflowers and even snow hung in the air. For long stretches of time, all we could hear was nature–the wind rustling through trees and the gurgling of streams. No talking, or shouting, no electrical humming or the din of cars; just nature. That section of the park is named Paradise, and I would be loathe to call it otherwise. We passed a number of animals, mostly unconcerned with our presence; the deer stayed a fair distance from the path, but the chipmunks and marmots chittered and ate an arm’s length away. The higher we hiked, the more breathtaking our surroundings became. We hiked past the tree line, up past the snow line, and nearly as high as we could travel without a special permit. As you can see, everyone else coming down has a big pack filled with survival gear, in contrast to Anne going up, who has left her fate to the gods who watch over the unprepared.   We were eventually forced to turn around due to a fog rolling in–that, combined with the ultra-slippery snow covering the trail next to steep cliffs seemed a foolhardy venture, even to us. On the way back down, the fog broke in one area, spotlighting a glacier.   I never in my life would have guessed when looking upon the mountain from a distance that it would be more than just rocks and snow, but now, having been there, I can safely say that it is one of the most beautiful places I’ve seen in my entire life, and in no way can the pictures I took even begin to do it justice. The sheer beauty provided an excellent contrast for the horror that came next. Dun dun DUN–CLIFFHANGER ENDING. (See what I did there?) My name is Mellzah, and I approved this message.