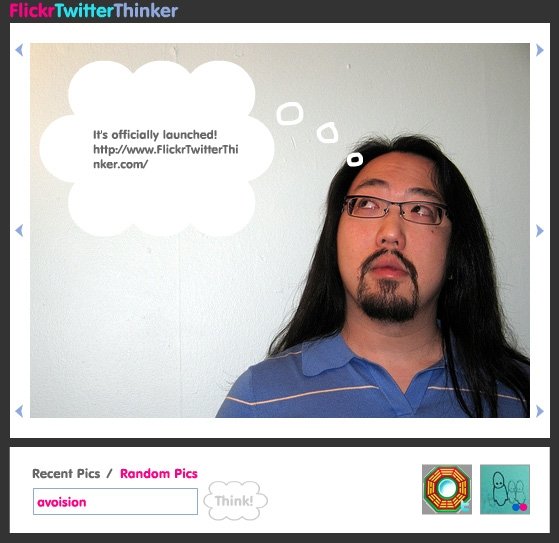 Every once in a while, I post to let you know how awesome my friend Felix is. Here comes another one!

You may remember Felix’s last Flickr experiment, Astronaut. Every year around March, his pi10K experiment makes the internet rounds. He’s done a whole series of experiments that are unique and thought-provoking. Anyone can upload their photo to the database using their Flickr account by tagging it according to the directions on Felix’s site; the picture is then combined with tweets pulled from Twitter based on whatever keyword you’d like to search, oftentimes with hilarious results.

I, for one, couldn’t resist. Check it out and upload a photo of your own! 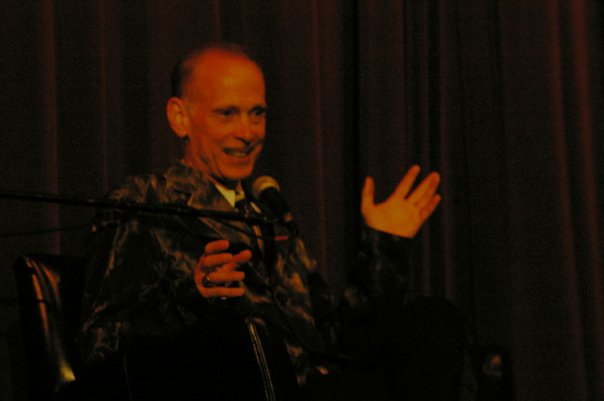 Yesterday I met John Waters. I’d become obsessed with his films at a young age, as they were most definitely forbidden. At one point, when I was around 10 years old, my sweet, loving, gullible parents asked if there was something I wanted from the video store while they went to a dinner party. I’d read about Pink Flamingos recently, so that’s what I asked for. I gather that they’d never heard of John Waters before because my mom dutifully went out to rent it for me, only to be informed of its nature by some bastard counter-jockey. Not only was I in trouble for asking to watch it, but John Waters films were banned from the house as well. That’s how I knew I’d latched onto something good. Years later, when Pink Flamingos was released in its 25th anniversary edition DVD with Female Trouble, I fell in love with Divine, the most beautiful woman in the world. Harris Glen Milstead’s confidence as a plus-size drag queen was awe-inspiring, and he was eminently likeable, even when he played supposedly despicable characters. He, sadly, died the night before he was slated to appear on Married…With Children, which could have been a huge crossover success for him. So many of Waters’ original casts are dead now. Divine, Edith Massey (who used to run a junk shop and would rummage through people’s trash in the slow months, wrap up garbage and sell it to children as ‘mystery gifts’–when they’d complain, she’d laugh and tell them that they couldn’t get lucky EVERY time; is it any wonder I love her?), Cookie Mueller, David Lochary, Paul Swift…I suppose when you get into films that were over 20 years old by the time you were allowed to see them, your opportunities to show your appreciation decrease exponentially. This was why I was particularly thrilled to have the opportunity to meet John Waters, the king of trash, the prince of puke, the emperor of filth, the originator of it all. As part of the Seattle International Film Festival, John arrived at the Egyptian Theater yesterday afternoon to give a short interview and present his film, Cecil B. Demented. After the movie, I went to my car, grabbed my Pink Flamingos poster, and started walking to Benaroya Hall for his ‘Dark Waters’ presentation. My logic was that the weather was decent, it was a short enough walk, and there’s no sense wasting gas and paying for downtown parking if I didn’t have to. Unfortunately, partway there, the light drizzle turned into an out-and-out downpour. I huddled under my scammed umbrella*, and tried my best to protect the poster and stay as dry as possible; by the time I arrived at Benaroya, the poster was no worse for the wear, but I was a different story. My shoes were soaked. My socks were soaked. My pants were sopping up to my thighs. My sleeves were soaked. I was a shivering mess, and goddamnit, I had looked CUTE when I left the house. Not so much anymore. Once again, exercise is total bullshit. Screw nature. Look at those disgusting trees, stealing my oxygen. Oh, I can’t stand this scenery another minute. All natural forests should be turned into housing developments! I want cement covering every blade of grass in this nation. Don’t we taxpayers have a voice anymore? While waiting in line to pick up my will-call ticket, I overheard the people behind me whispering to one another, “Hey, isn’t that Nigel Mustafa’s friend?” I know they weren’t talking about me as I’ve been to ONE Mustafa show and ended it on my knees crying out to god “MAKE IT STOP” (Precisely as the music ended…I have nothing if not great comic timing), but I do know one Mustafa acolyte, and I immediately snapped my head around, looking for her. Sure enough, a few places ahead of me in line was amazoni! With my ticket, I received an invitation to the afterparty being held at the W Hotel, requesting the ‘fabulousness of [my] presence’. Um, hell yes. The girls behind me passed off one of their extra invitations to Amazoni, and we headed into the theater. John Waters is a great speaker; he’s full of stories and very at-ease with his audience. The audience, in turn, clearly adores him, giving him a standing ovation even before he started speaking. One of the more interesting tidbits was his proclamation that you must have very good taste in order to have bad taste, which is something I tend to agree with. There are good bad movies, and bad bad movies, and it’s important to know the difference instead of just reveling in trash. His talk was over all too soon. I met back up with amazoni, and we made our way to the W Hotel’s ‘Great Room’, which was pretty swanky, and entirely the sort of party I’m unused to attending, with swag bags and waiters rushing around with posh appetizers and free drinks. I felt like a Hilton, except I’m not a whore. Eventually, John came in to great fanfare. People immediately started lining up to meet him, and Tonya and I were no exception. I grabbed my Pink Flamingos poster and Odorama card, and anxiously stood in line. What would I say to my trash auteur hero? How can I come across as neither stupid nor creepy? Tonya went first and thus gave me a few more moments to fret.   When I was face-to-face with him, the words just came. “John Waters. I love you. Even more than my haircolor, do I love you.” which got a genuine smile from him. When I asked him to sign my poster, however, he said he’d be happy to as long as it wasn’t one of the counterfeits that had been circling around…and as it turns out, it was. It didn’t even have his name printed on it correctly, saying that it was a film by ‘John Walters’. I was mortified, and almost felt the need to try and explain that I actually BOUGHT his films and I wasn’t purposefully trying to rip him off. I sincerely felt like the world’s biggest asshole. Here’s a picture of me and my double chin, moments before I wanted to die of embarrassment: He still signed my Odorama scratch & sniff card, and took a picture with me, and was gracious as could be about the whole thing, but I still feel small and stupid for not having realized it was a fake.   This guy? Made me feel better, just for existing. He excitedly told me that he was going to have this signature tattooed on him, and I very much appreciate that sort of mojo. My evening also drastically improved when I won one of the original vintage Don Featherstone pink lawn flamingos FROM Pink Flamingos, signed by John. THIS fucking thing is NOT a fake. Tonya gave me a ride back to my car as it was STILL raining when we left, and shortly thereafter, I was pulled over for nearly creaming a guy who darted out in front of my car. It’s pitch black, pouring rain, and the guy was apparently wearing all dark colors, and I was driving extra slowly because it seems like a lot of the people on Capitol Hill have a deathwish, so those factors combined are probably what got me a warning and not a ticket. Which still, you know, doesn’t make up for the coppery penny taste of naked fear and the knowledge that I almost killed someone, so there you go. Yesterday was apparently all about extremes. Today, I’m hoping for ABSOLUTELY NOTHING to happen. *The great umbrella scam: When I initially drove to Seattle, I stopped for a couple of days in Portland, staying with a friend. We ended up going to downtown Portland, getting TRASHED, far too drunk to drive home, so we sobered up by hitting every coffee shop in the area and asking if they’d seen the umbrella we lost earlier in the day. You know, small, black? Collapsible? We ended up getting our hands on eleven of these umbrellas. Toward the end, the difficulty lay not in the blantant lies, but in finding more places to hide the umbrellas while we went in and inquired. We had umbrellas shoved up our sleeves, down the backs of our pants, in the sides of our shoes…it was ridiculous! The next day, we had an umbrella fight on his front lawn. As far as I know, I have the last surviving umbrella from that evening.