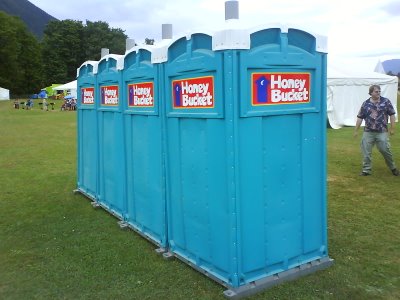 Today, as I drove to work in bright sunshine under clear blue skies, my windshield was pelted with droplets. This would be merely unusual and not cause for a face of horror and concern were I not driving directly behind a Honey Bucket truck.

The name Honey Bucket alone in reference to a port-a potty makes me want to (a)retch and (b)never consume honey again.

AND IS SO GROSS.

Here are (and I’m sure you’ve been awaiting it anxiously) my thoughts on the Open-Source Boob Project (OSBP). I’m loath to link directly to someone so clearly looking for Internet Fame, but if you want to go to the source and read it, I’m sure Google can help you.

For those of you unfamiliar with the OSBP, basically, a guy and his group of friends went around to a couple of conventions and asked women if they could feel their breasts; it’s indicated that this was mostly done in a circle of friends, though some strangers were asked; at a future con, they devised a system wherein women would wear green or red buttons signifying that “Yes, you may ask to touch my breasts” or “No, you may not ask to touch my breasts”, respectively, stressing that this program was ‘opt-in’ and those not wearing buttons would ‘never be asked’, and that women wearing green buttons could always refuse. (How are you going to recruit more women to your party, one might wonder, without asking non-button-bedecked women to opt-in?) In his posts, the author also indicated that the group approached women who were ‘dressed to impress’…so I guess it’s opt-in unless you’re just too goddamn hot or dressed like a whore and therefore ‘asking for it’.

Here is why I think this whole thing is dangerous. I have no problem with a group of people who want to get together and grab each other’s boobs. Cthulhu knows that Laura and I had a field day at Dragon*Con in the room party judging the ‘best ass contest’, so I’d like to make it clear that I’m not intending to come off as a hypocritical prude. Have fun. Go nuts. Grab nuts.

I have a problem with taking an experiment done mostly with friends, and extolling its virtues in a large con environment where results are likely to be MUCH different. Many people are far more comfortable around their friends than they are around strangers, and so with friends, you can push comfort boundaries a bit and people are less likely to end up hurt, offended, terrified, or worse.

If you were a single woman ‘dressed to impress’ via cosplay or simply a nice outfit, and you were approached by a group of strange men who asked you straight out for a favor that was sexual in nature, how would you feel? Even in a con environment, with hundreds or thousands of people milling around nearby, there is still a huge power shift in favor of the group of males, who could, in all fairness, quite easily drag you off. If you give them what they want, will they go away? Or will they ask for more? If you deny them, what will happen? Is it more or less dangerous for you to acquiesce?

I don’t disagree that men can be sexually assaulted and even raped, and that the double-standard shouldn’t exist (just look at the difference between the way that males have to treat female strippers versus how females treat male strippers–men can look but not touch, while women practically ATTACK the men). However, in this instance, I don’t think it’s unfair to discount attacks on men from the equation entirely, for the following reasons: When a group of men approach a woman and ask her for a sexual favor, men are most decidedly the aggressors, and furthermore, there is no reciprocity in the OSBP. Oh, sure, some men offered to allow women to feel their chests or grab their bum, but there is no direct male equivalent for breasts. Penis-touching was disallowed because it was ‘too sexual’ in nature, whereas boob-fondling….is not? There we have it, folks: This is merely a guy’s elaborate excuse to get his hands on some titties, and if you refuse him, you’re the one with the problem, so bound are you by social mores!

Furthermore, this is a direct quote: “Unfortunately, I can’t decry the process of “asking repeatedly,” mainly because it’s the only stimuli a lot of women respond to. Frankly, I think any woman who has to be begged fifteen times before she eventually accepts should be drug into the back alleyways and beaten, because her rampant need for a string of pleadings trains the wrong sort of men that no doesn’t mean no. And then we should go beat up the men for good measure.” (edit: This is a quote from 2005 and was not stated in reference to the OSBP. I apologize for the error, though I still believe it is an important insight into his character and demeanor towards sexuality.)

Yes, there exists a subset of women who want you to PROVE how much you want them before they give in, and I’ll further agree that the women who do that train men that if they ask repeatedly, a future answer is more likely to be ‘yes’. HOWEVER, not decrying it within the scope of the OSBP is tantamount to saying that everything he said earlier about the project being opt-in is a load of freshly-shoveled manure, since he does not truly believe that no means no. So at conventions, does the red button on one’s chest mean NO, or in this guy’s mind, does it mean ‘No until you ask me often enough’? Far from teaching that subset of women anything, I believe that it further reinforces the idea to MEN that it’s ok to ask ad nauseum as it improves your chances, with the originator of the project’s blessing.

The greatest evil from this madness, unfortunately, is that even though the author has posted and NOW suggested that people not try to recreate his experiment, is that you can’t put the cat back into the bag. Even if this schmo doesn’t attend any convention in my area, there are plenty of people who read what he had to say, buy into the idea that second base is totally ‘freeing’ and ‘healing’, and want to grab some titties themselves. How many people are going to ask to touch your boobs at San Diego Comic-Con? At PAX? At Dragon*Con? At GenCon? Will they be more or less respectful than the originators of the idea? Is this something you should *have* to be concerned with when all you wanted to do was drool over Jamie Bamber a little bit, and maybe run up to Kevin Sorbo clapping your hands and squealing ‘Hercu-LES! Hercu-LES! Hercu-LES!’?

You want to grab some titties? Fine. Just keep it to your rooms. Do you really want to give attractive women another reason not to attend conventions?

Dear Douche Who Has Been Breaking Car Windows At My Apartment Complex,

Your life has brought you down such an interesting career path! I am certain that petty theft and vandalism have netted you far more financially and morally than forty hours a week of working as a french fry cowboy, so kudos to you! If you make your way around to my vehicle, I would like you to note a few things:

*There is nothing of value in the car; the stereo system is stock and all of the junk on the floor and in the backseat is actually junk. If it were valuable, I wouldn’t be leaving it in my car with crowbar jockeys like you roaming around.

*I am not entirely opposed to vigilante justice, and, in fact, feel that individuals who render ‘services’ such as yours are wastes of resources, even cyclically-replenishing ones such as oxygen.

If you still feel you must enter my car and take a look around, perhaps you may want to try the door first; given that I drive a quality American-made vehicle, I have been unable to lock it for the last year as the alarm system randomly sounds throughout the day and night when the door locks are activated.

We live in a world where few traditions are reverently upheld; however, if you’re a purist and must break a window, may I suggest that you go for the plexiglass window instead of the safety glass? It’s much more likely to slice your arm and hit an artery, whereas the safety glass was truly intended for my protection and not yours.

In conclusion, eat a dick. Or nine of them at once.