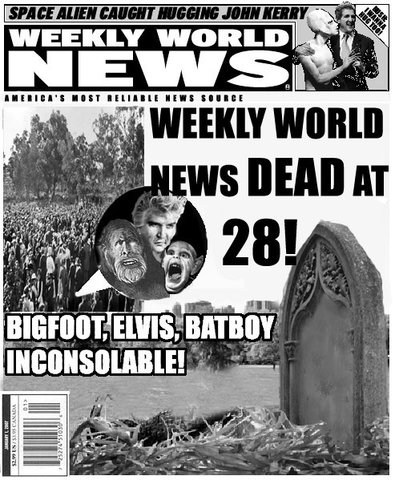 And just like that, one of my few remaining dreams has died. I loved the Weekly World News more than it’s probably healthy for any one person to love outlandish news.

Once upon a time, many years ago, my family was on a road trip going to visit my great aunt in Colby, WI. No one really liked this aunt, even my parents, so why exactly we were visiting remains a mystery to this day; HOWEVER, given that my dad knew exactly how awful, boring, and summer-wasting this trip was for the kids, he was feeling particularly indulgent when my brother and I raided the gas station for small entertainments. It was then that I picked up my first-ever copy of the Weekly World News. The issue focused on alien abductions, and the small, sadistic tortures they would inflict on abductees. I was simultaneously enthralled and terrified; so much so, that the mere thought of having the PICTURE in the room with me when the lights went out at the motel was unbearable. What if it was looking at me in my sleep? What if the newsprint was a beacon to aliens, who only search out those who know the truth? I locked it in the bathroom all night and prayed that they would take my brother instead.

My mother was rather unhappy with this development.

Still, once I had the bug, there was very little she could do to stop it. I put the ‘good luck’ dot in my shoe before the spelling bee (in case you were wondering, I still lost). I bought the Ed Anger column compilation book, ‘Let’s pave the stupid rainforests and give school teachers stun guns: and other ways to save America’, and dutifully memorized each one of its pages. I reveled in Dear Dottie’s venomous wit.

As I grew older, I came to understand that the whole thing was filled with entertaining lies, and, this revelation, instead of ending our love, only served to increase it. I appreciated the effort it took to print news of this variety week after week, and when I learned Photoshop, I swore that one day I would work in those hallowed, Bigfoot-adorned walls. They needed me. I knew this, because I caught them recycling articles time and time again. I could take them to the next level, one day, I was sure of it.

The years went by, and still the Weekly World News persisted. I can’t say I was happy about the way it had changed. No more Ed Anger, no more Dear Dottie, and in their places, a fiercely pro-american, anti-‘towelhead’ vibe that felt reactionary, out-of-place, and a little sad. It felt like they were desperately trying to get a foothold in the market, any market, to survive. I had no interest in anything with Osama or Saddam on the cover, so I stopped buying. I missed the old days, with dinosaurs being found in a remote part of Brazil, sharks with razor sharp teeth sticking out of every available surface, and Elvis riding off into the sunset on a Chupacabra’s back.

So the Weekly World News is now dead. Even though, much like Elvis, they took some missteps towards the end, they will still be sorely missed. Whenever I buy groceries, I expect to feel a black-and-white weekly-sized hole in my heart.

Today, as I was talking Napoleon out for a walk, someone shouted at me across the complex “HEY, RENO 911 SEATTLE!!!”

I did a double-take. Then a triple-take.

Surely, I had heard wrong.

Someone had shouted something else entirely, and not at me, but at random. There are kids playing all around in the sunshine. All sorts of people are yelling things.

SURELY, I had heard wrong.

Holy shit, you guys. Someone recognized me from the youtube video. From the youtube video that has had less than 35,000 views, TOTAL. Although I still enjoy it when some stranger approaches me and says “Hey, you’re that robot chick!”, *this* is alltogether on a different level.

I ended up going and chatting with this woman for a while, she said she had stumbled across the video randomly and thought she had recognized me from the apartment complex. We drank some coffee and ended up talking and laughing for a few hours–who would have thought that this little 10 minute video my friends and I made in February would still be getting hits and attention this long? 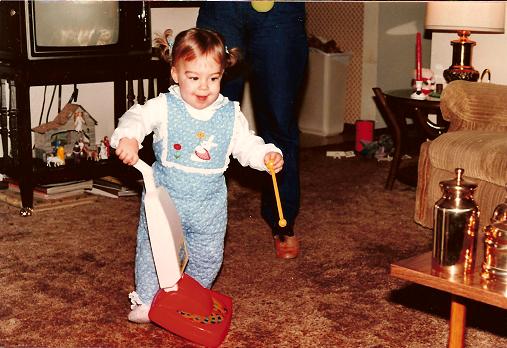 Last night, my grandparents flew in, and my grandma was bearing all sorts of those strange, grandma-y gifts. Things like deodorant and toothpaste, which, crazily enough they actually sell locally, hummingbird coasters, a second Superbowl XXXI Green Bay Packers watch to match the one she gave me in 1996 (I think she stockpiled them or something!), and a set of four hors-devours-cheese-spreaders, each topped by a different bird (oriole, bluejay, cardinal, and one I can’t identify) because I do SO much entertaining with snacks in my home.

I think, in total, I’ve managed to convince about a dozen people to come over to my apartment since I moved to Kent over a year ago, and two of that dozen was simply because they were picking up my dog, and one of the others was required to show up as he was my boyfriend. People just don’t want to drive to Kent. I wonder how many years those bird spreaders are going to sit in a drawer or a box before I have occasion to use them?

I know her heart was in the right place; it just makes me giggle to think that the woman who re-uses ziploc bags, the woman who brought a coupon with her to Washington to buy coffee creamer to keep in their hotel room is the same woman who saw a bunch of bird cheese spreaders in a store and said “YES! Melissa needs those!”

She also brought me a small photo album with some pictures of me and some of my parents. So today is picture post day, presented in the order in which they appear in the book, with as much or as little smart-assed narration as I feel is necessary. Even when I was little, I was more than ready to rock the Chore Wars. 30XP and a chance of bounty freshness! It was about this point when I must have realized that my family had essentially dressed me in a quilt, and I started to approach the camera-person menacingly as even at the tender age of twenty months, I knew that quilts would never be flattering to the hips. I’d just finished punching the glow-worm in the face, and my tiny fist was clenched and ready for more action. As you can see, they quickly changed me out of the quilt outfit and promptly put me into something else with Jetsons sleeves. I pretended not to notice and played with my robot dog. My family liked photographing me in the exact same spot with different outfits and toys. I imagine if I compiled all of these photographs together, it would make for one hell of a funny flip-book. OH GOD NOEZ WHY ARE YOU TAKING PICTURES OF ME IN THE BATH!? The shame! The shame! I wasn’t about to let them take any more naked pictures, so I layered myself into an impressively thick snowsuit. Additionally, I now understand my sudden desire to dress in a snowsuit at Lesley’s wedding. Some sort of lamb…bunny…thing they put me in. It contrasts nicely with the brown carpet. Behind me in blue is my mom, and the woman in the striped shirt is my grandma (on my father’s side; the one that is currently visiting). Grandma, as you can see, is not so sure what to think of the lamb-bunny-bastardized hybrid. Apparently Grandma is even less certain about the front than she was about the back. This picture was the first one that told me WHICH house with ugly 70’s colors the photographs were being taken in–it’s my grandparents on my mom’s side. The Chinese characters on the wall were a dead giveaway, as they are the only relatives I have who have lived out of the country–China, Singapore, and Indonesia. They have those characters on their wall to this day, though the furniture is much more tasteful these days. My mom and dad on their 5th wedding anniversary, in 1983. The stereo you see on the right, they had all the way up until their divorce in 2005, with the exception of the record player, which they got rid of in 2000 when the family moved to California. This is also one of the few pictures I’ve ever seen when my mom looks genuinely happy. Then, the photo album jumps into a time machine to grab a picture of me when I was a baby. HANDLESS BABY! I didn’t get the hook replacements until much later, when I was able to appreciate them. Then the time machine jumps four years into the future! I CRIED when my family got rid of that hideous orange couch. I told my parents that I wanted it for when I got my first apartment. No, even though they kept the stereo for over twenty years, this couch crying fit did NOT happen recently. When I picture a monstrosity like that in my place now, I shudder a little. It was velour. VELOUR!