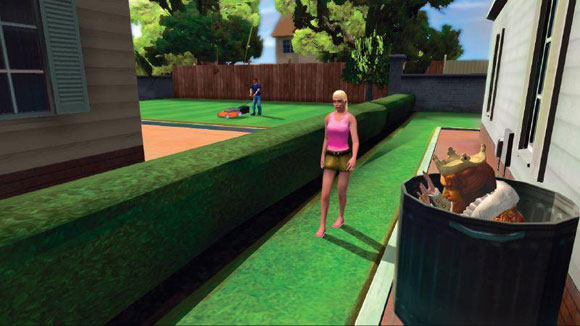 With the veritable apocalypse of weather we were having the other day (snow plus thunder and lighting…it was like a Lewis Black bit outside!), I felt I would be remiss if I did play Sneak King at least once (available at your finer Burger Kings nationwide) which may be one of the funniest-in-an-awful-way games of all time. The premise? You are playing as the King (who is already vaguely creepy to begin with) and you sneak around surprising people with Burger King food. There are various places the King can hide his royal behind in and subsequently leap out, presenting coffee, sandwiches, and sides with various flourishes. However, whenever the King hides in a location where you as the player can still see him (inside a box, inside a garbage can, under a truck), it seems that a more accurate title for the game would be ‘Serial Rapist King’ or ‘Molest King’ or ‘Pervert Neighbor King’. While you are playing the game, it seems thoroughly plausible that the King will leap out, and instead of presenting hot food to a hungry NPC, he will, in the terminology of one Trudy Weigel, “toss aside his whipped ices and rape the shit out of them”. ‘Fuck King’? I’ve been making a little more effort with things like hair and makeup lately–and when I say effort, I actually mean effort. It’s something I have to work at, because really, while I like feeling like I look nice, I mostly don’t give enough of a crap to try. An extra 15 minutes of sleep in the morning or blowdried hair? Sleep generally wins. Another extra 15 minutes or makeup? SLEEP.

Well, I’ve learned two important makeup lessons over the past two days that I’d like to share with you.

FIRST. If you are using, say, a lip balm mostly composed of cocoa butters and the like, it’s not a good idea to keep it in your pocket, as when you go to open it up, it will have melted and warm, oily, smelly butters will explode out all over one’s desk, pants, and office chair, making it look as if one had a horrible, unspeakable accident.

SECOND. Nothing makes you look more awake with a minimal amount of effort in the morning than a little blush. I prefer a liquid blush because it goes on very sheer. However, an important thing to remember is to make sure it is closed before you go to pick it up, as it will spill all over everything, staining one’s desk, pants, and office carpet a horrifying shade of red.

CAN MY WARDROBE AND OFFICE REALLY STAND ANY MORE EXPERIMENTATION WITH MAKEUP? REALLY?

Makeup? $30. Time spent applying it? Negotiable. Destroying several pieces of furniture and an outfit in only a few seconds? Priceless.