Yesterday, I drove to Seattle in the hopes of getting some of the free gasoline they were giving away in Queen Anne. As it turns out, doing a promotion which causes an even greater traffic frenzy during the already normally-frenzied rush hour is a STUPID IDEA. It lasted all of half an hour before getting shut down, well before I even found my way into the general vicinity. No free gas for Mellzah. At that time of the day, all southbound highways are essentially parking lots, and none of this part of the story matters except that it means I travelled EAST into Kirkland to pass time until I could go home.

Well into the evening, an elderly Japanese man (80 if he was a day) approached the table I was sitting at, and started making small talk with Scott. He said he’d be singing some Elvis, and over the course of the conversation, he reached out and touched my cheek twice. A little strange, yes, but the bar is loud and perhaps he was just trying to get my attention. Even though it wasn’t a conversation that I was participating in. Nothing unusual there. Nosir.

Later on, as I was walking past him, he asked me if I’d ever slow-danced before.

So, I decided to humor the elderly Japanese man. Ne’er ye mind that I don’t particularly like being touched by strangers. He’s OLD. I cannot possibly say no.

All of ten seconds later, he’s slow-dancing with me. And not a respectful distance sort of slow-dance, oh no. As I am growing increasingly uncomfortable, he begins singing a song about the month of September to me. I wanted to call out the universal safe word (banana!) but no one in the vicinity seemed likely to rescue me, PLUS he’s OLD and I should humor him because he’s OLD and maybe I am being silly and he’s just trying to be a gentleman with zero creepy overtures whatsoever plus he’s OLD and it should almost be over SOON and THAT is when he whispers in my ear “oh you are-a so cute, baby, what are we gonna do about it?” and GRINDS HIS HIPS INTO ME.

He then asks for my phone number. Oh yes, old Japanese man. That is a lovely idea! Perhaps I could introduce you to my grandfather. You might recognize him from when you fought him in World War II.

I’d been meaning to write here about other recent Freak Magnet incidents–a stranger telling me that I had nice teeth and, by the way, would I like to suck his dick? and also the guy who kept rubbing my hand because he was trying to teach me about ‘Chaos Theory’. Unless the chaos caused is that of my other hand punching you RIGHT IN THE FACE, I’m not buying it, buddy. But I digress. BOTH of these stories have been trumped by the 80-year-old Japanese man grinding his hips into me and trying to smooth-talk me in broken English. I may never have a story that beats THIS story, ever.

Freak Magnet willing, however, I will. 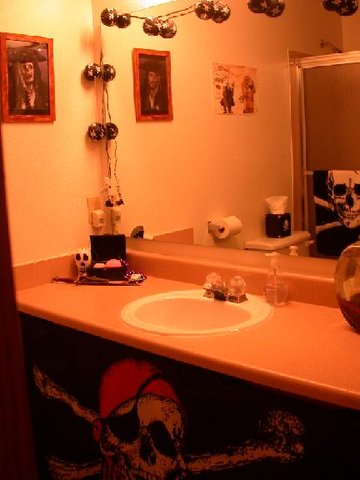 Ahoy me foine buckos! In honor o’ this glorious day, that is, International Talk LIke a Pirate Day, I’m presentin to ye me new and updated Poop Deck…er, piratin’ bathroom. This room has a bit more count-arrrr space than me last apartment, so ye can see that I’ve made a few changes to make ‘er the most glorious Poop De–Piratin’ Bathroom tha thar evarrr was. T’only thing missin from this room ’twas in t’ otharrr room b t’ showarrr curtain as this one be havin’ doors. I be thinkin’ about cutting some window stickarrrs to t’ shape o’ t’ Jolly Rogarr and sticking them on t’ doors, but I needs to be making sure they’ll come off, lest t’ apartment managarrr make poor Cap’n Mellzah Rackham walk t’plank. Still in t’room but not appearin in these pictures be t’ matchin’ pirate garbage can and bath mat, along wi t’ mandatory Jack Sparrow Teen Girl Squad droolworthy poster. New to t’room on t’port side be a treasure chest, complete wi’ a Lush Black Pearl and a Sex Bomb, sent to me by me matey Beth, t’ pirate mardi gras beads I plundered in Las Vegas, and a night light purchased from Ikea for the sum of one dollarrrr that didn’t start out as a skull, but ended up as one with some creative razorblading and paint application. Look how it lights t’room red like Blackbeard’s dynamite at night! Also makin’ its first appearance be t ‘Here thar be robots’ treasure map and a magic picture that be changing dependin on which way ye look at it, yet ye can see both its faces when ye look in t’ mirror. On t’ doorknob hangs a unique piratin’ artifact tive t’ me by Harrrrrgrove t’ Art Parrot o’ Tangrala, and as well as bein mighty attractive, it gives fair warnin to those who might be inclined to leave t’ seat up that they’ll be losin a hand in t’ bargain.

On the starrrboard side o t’ sink, makin its debut be t’ piratin rubber duck that Savage Scotty Seadog plundered from the depths of some retail environment and me new matey, Jaws t’fish. Don’t be fooled by his size, for truly fearsome he be. He bit a man in two fer lookin’ at him funny. That ship, lyin at t’ bottom of his bowl? He sunk it, so he did. T’ crew nevar knew what hit em, and evar since I made it me goal to capture him and forcibly make him part of me crew. T’battle raged for weeks, through waters fair and foul, but eventually he submitted to me might. Now me ship can sail unchallenged as her legend spreads far and wide–none dare to ride on the same tides as one under t’ protection of Jaws. Tonight me piratin’ crew meets at t’ Jolly Roger in Ballarrrrd. Be there, or ye be a filthy stinkin bilge ninja whose mother I plundered last week.

Note t’ Johnny Depp: This be the third talk like a pirate day that I’ve asked ye o come shiver me timbers, lad. What’s holding ye back? Is it t’ robot costume? For I assure ye, it can be taken off. When yer movie came out this summer and all me mates were spouting horrible things about t’ quality of t’ movie AND yer actin abilities in one fell swoop, Mellzah defended ye. No one loves ye like Mellzah does! Come drink grog w’ Mellzah this piratin’ day and she’ll be making ye feel better.

And then Mellzah’ll ball ye until yer liver explodes.

Life has been good and busy and slow and awful and icky and awesome over the last week. I have laughed, cried, and laughed some more, and walked out with a strong resolve to do whatever it is that needs to be done by any means necessary so I can just get all of it over with and stop worrying and start LIVING.

Monday I went to the Mariners game with Carrie, John, and Ginnie, as John had gotten free tickets from some mysterious source. Nothing seemed more appropriate on a day when all we could hear about was ‘America, America, America’ than to go watch our national pastime. Unfortuately, we lost to CANADA, which sucked pretty hard. This was made up for by unleashing my Shouty Monster, who resides not-so-deep inside me, and who sneaks out after a few beers or so. The horrifying things proceeding from my mouth were all punctuated by stabby motions with the hand holding the tiny american flag they gave to me at the door. Some, but not nearly all, of the things I shouted went as follows: “ABORTIONS FOR SOME! MINIATURE AMERICAN FLAGS FOR OTHERS!” “IF YOU’RE GOING TO WALK HIM, AT LEAST HIT HIM IN THE FACE!” (I was awfully proud to have started a chorus of nearby ‘In the face! In the face, motherfuckers!’) “SEND HIM BACK CRYING TO HIS POUTINE-EATING BROTHERS!” “IF YOU LOSE, THAT MEANS THE TERRORISTS WON!” “SHOW THOSE FLAPPY-HEADS WHO’S BOSS!”

I also called the ump a dicklicker, and started chanting ‘satan’ at some group of dillholes nearby who spent many minutes cheering for Jesus. Pft. Jesus doesn’t play for the Mariners. Last I heard, he got kicked off the team for running around with an unsavory group of people, including known whores, and for drinking water-wine in the dugout.

9 innings later, I was tired, my Shouty Monster was appeased, and we all went home, miniature American flags in tow.

I still need to write about the camping trip and the mini-road trip that Jez and I took–since the neighbor with the internet I’d been leeching has either moved or wised up and locked their network, I’ve been hard-pressed to update. So just so you know–I’m not dead, just mostly internetless!