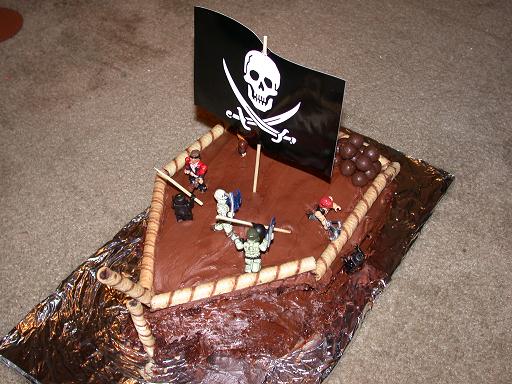 Friday evening I stopped in at Pegasus to say my goodbyes to Jessica, as she decided she’s had enough of working there. Needless to say, I drank far too much on an empty stomach, and unfortunate people like bellachiara6 and shadowstitch felt the consequences. Kevin and stationary_jew dished it right back out, though, calling me a communist because I live in Seattle and have not seen Back to the Future. I’m not quite sure I’ve heard of those two things in particular being tenets of communism, but all of a sudden I started calling people ‘comrade’, so it must be true. All of it.

Saturday morning I woke up bright and early in order to begin preparations on the Pirate Vs. Ninja cake. The first stop was the Bell Square Lego store, to find tiny pirates and ninjas to fight each other. At some point, kids must have stopped thinking they were cool, as I found dinosaurs and vikings, but no pirates or ninjas. I bought some generic people and moved on to the Toys R Us. It was right around that time that I realized I should’ve done this bit of shopping during the week, as the screaming of children was beginning to penetrate my SOUL. At Toys R Us, I found tiny pirate action figures, but no tiny ninja action figures. I believe that speaks volumes about the coolness of pirates vs. the coolness of ninjas–pirates are cool enough to warrant their own teeny tiny action figures. Ninjas? Apparently not so much.

Although my cake did not turn out as cool as suboshi‘s, I’m still proud of it. As you can see, considering this was a pirate vs. ninja party, and I’m clearly sided with the pirates, I didn’t want to give the ninjas any sort of advantage. They were already outnumbered, and a pirate has shot one dead, and another is hanging off the side of the boat. I also couldn’t make it a fair fight because I’d run out of lego figurines.

After finishing the cake, I threw on my costume and headed over to safetymonkey’s place, where I promptly tripped over my skirts climbing the stairs and almost had a cake disaster. Luckily I have the reflexes of…something that has excellent reflexes, and disaster was averted. Had my face actually gone INTO the cake, or had the cake splattered on the sidewalk, I would’ve turned around and gone home, and left a cakey mystery for everyone.

Before I left, I discovered how difficult it is to take pictures of one’s self wearing a costume, and therefore have pictures of the costume while OFF to show off how awesome it turned out. Every time someone asked me where I bought it, I got all manner of warmfuzzies. Also, a DIYer somewhere got her wings.

Laugh if you will at the gun-dagger, people proposed marriage because of it. Apparently I need to carry it around ALL THE TIME.

There were many many more pirates than ninjas at this party. Some say it’s because a ninja can kick, like, eight pirate’s asses, but I disagree. One major advantage of a pirate costume is that one’s face is not covered, therefore making it possible to more easily consume alcohol. The people who did show as ninjas were very creative about it, though, and I do have to give them props for that. Monkey and his friend Justin dressed as Scorpion and Sub Zero (words cannot describe their sheer awesomeosity), and there was even a ninja turtle present. As usual, I brought my camera and took barely any pictures. This would be why I don’t NEED a nice new camera that takes non-blurry pictures, as I don’t use mine enough as it is.

James and Katy cut out early to GO HOME AND PLAY GUILD WARS. OMG. Party Foul x gazillion. They were relatively unconcerned that it is sad for their friends to see them go home early to play the videogame they spend 40+ hours a week making.

However, I became a little party butterfly after they left, zipping around, sipping fine tequila, and being invited to many MORE upcoming parties. “Have you been invited to the 666 party yet? NO? Let me get your number, and I’ll make sure you’re invited. We’re also having another party later this summer, and you’re COMING.” Allrighty! “I’m having a Mexican Skip Day party tomorrow, and you’re coming!” Allrighty! “Has anyone told you about ____ party? Let me get your number, you’re invited!” Allrighty! Apparently bringing cake makes you everyone’s friend.

Some people recognized me out of the robot costume, others just remembered how awesome the robot costume was and went “OMG that was you?”. I think Monkey believed I was just some random pirate party-crasher until I revealed my robo-secrets.

I was at the party until 5am. It was more than a little disconcerting to watch the sun come up as I was driving home, and have birds chirping madly as I was just trying to go to sleep. I could only sleep for a few hours, as my body clock DEMANDS I am awake no later than 8am these days. I suppose that’s a blessing in a tiny way…if I forget to set my alarm clock, I’m only half an hour late to work as opposed to many many hours late…but it’s a pain in the ass on weekends like this.

At 11:30, I met up with Ginny to go to lunch with her and one of her friends and then to see a movie. We ended up going to see RV, the new Robin Williams movie. I heart Robin Williams; he and my dad look eerily similar, to the point where watching Robin Williams in a movie gives me the warm fuzzies no matter what it’s about. I thought the movie was funny, but not die-laughing funny. It might be my bias, but I think that Robin Williams is too funny as a comic actor for a movie like that–the jokes were too stale for someone with wit like his. Cheryl Hines’ teeth fascinated and frightened me, as always.

After the movie, Jez called to invite me to Game Night, however, I’d been pre-booked for that time slot by the Mexican Skip Day Party, so I had to decline. By the time I got home I felt I had to take a little nap, but then Monty called me up and invited me to a family dinner. Who was I to say no?

I’ve eaten with her family once before, and we had some good laughs and good times, and Sunday was no different. Her mom’s new landlord came over in the middle of dinner to discuss the terms of a lease, and since we were all occupying the dining room, and Cujo was in the office, she led him back into a bedroom to talk. She of course, preceeded it with “Come back into my office and we’ll chat”, only realizing at that second she couldn’t do so because of the killer dog, so…do you believe that the landlord’s eyes nearly popped out of his head when she sat on the bed and gestured for him to sit down next to her? Because they totally did. She said he clung to the doorframe like it was giving him oxygen. Did we laugh our asses off after he left? You’d better believe it!

After dinner, it was time to head out to the Mexican Skip Day party. For those of you who hadn’t heard of it, May 1st was a scheduled protest date for illegal aliens. The plan was for them to not go to work, school, etc, and they weren’t going to purchase anything either, to show the power of illegal aliens in the US. The guy who was throwing the Mexican Skip Day party (Mike) works at a restaurant in Kirkland that’s nearly 90% staffed by illegals, so their protests were going to shut the restaurant down for a day. So, considering he didn’t have to be at work the next day, Mike decided to throw a party with some mariachi music, a pinata, salsa, tequila…and street fighter. I don’t really have all of the facts about the changes to immigration law, so I don’t have a hardline stance one way or another. All I knew was this party was an excuse to wear a giant sombrero and drink tequila. Or rather, more tequila. Monty and I had only been there for an hour or so before we decided to go home…my illness was starting to hit me with a vengeance, and she wasn’t feeling well herself, so it was time to call it a night.

Yesterday, I mostly slept and cursed my existence. The one bright point was when I went out to check my mail and got a birthday package from bellachiara6.

Before I show you the picture, I believe I have to explain it a bit–since high school, I’ve always wanted to rent a convertible, a giant chicken costume, and a giant pickle costume, and have the chicken drive around with the pickle in the passenger seat. No particular purpose to it. No destination. Just sort of cruising around. I was discussing this dream of mine with Nicki, and then I expressed concern that I’d be pulled over, as it’s not as if a chicken costume has great peripheral vision. Her response? It looks more like a giant green wang than a pickle, really. And contrary to popular belief, that only makes me MORE excited to wear it in public.