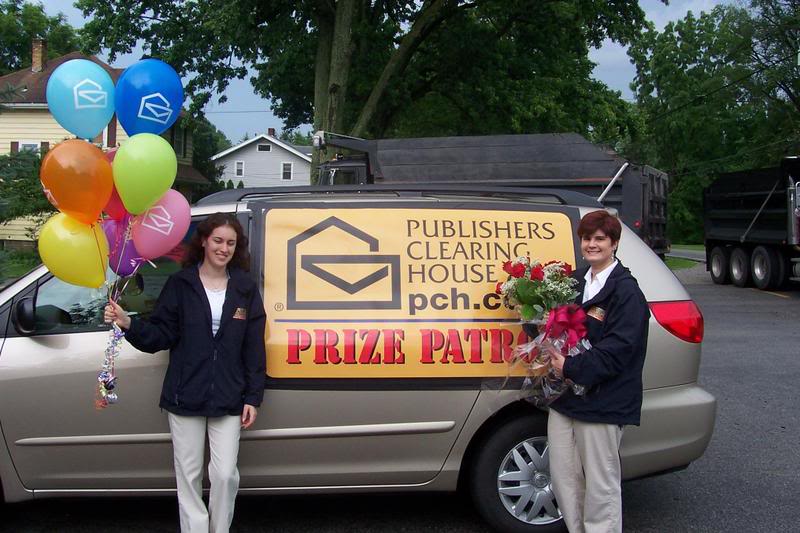 I was walking with my coworker to get the mail today as the SUN WAS SHINING FOR THE FIRST TIME IN 28 DAYS, and, as usual, it was all junk mail. I jokingly told her I kept hoping Publisher’s Clearing House would send us those packets full of junk to fill out and mail back.

I always loved filling those out as a kid. My parents discouraged me, but I was undaunted, even when it became more complicated than just pasting a stamp on something and sending it back. More complicated like, detach stamp A, glue it into box A, detach stamp B, fold it into an origami bird while standing on your head and eating a bug…it didn’t matter. I was determined. And every year I was CONVINCED that after the Superbowl, someone would be knocking on our door to present us with a million dollars, if only because NO ONE ELSE in the United States would go to the trouble of recording yourself gargling “I’m a Yankee Doodle Dandy” with Pepto Bismol on VHS, taking out the film and pasting it frame by frame on the back of some tanned elk leather and sending it in. I even made sure my family looked nice for when the camera crews came. Year after year, I reminded my family that if we won, I should get a horse, because if we won, it was ALL BECAUSE OF ME. And year after year it was a crushing disappointment when some 87 year old won instead of us.

But my little kid stupidity pales in comparison to what I’m about to tell you next: when I told my coworker about my not-so-secret Publisher’s Clearing House hopes, she responded with, “Have I got a story for YOU.”

She goes on to say that a few years ago, her sister called her, screaming, crying, absolutely hysterical. She got her calmed down enough to get out what was going on. The sister replied, “I WON! I WON PUBLISHER’S CLEARING HOUSE! I CAN’T BELIEVE I WON!!!!” Coworker: “You won? Wow! So they knocked on your door and gave you the prize?” Sister: “No. They just sent me the check in the mail!” Coworker: “…You didn’t win.” Sister: “Yes I did! I’ve got the check right here!” Coworker: “In that case, I won, too. Everybody gets those.” Sister: “Wow, they give everyone a million dollars?” Coworker: “…I’m hanging up now.”

And then we laughed until tears streamed down our faces.