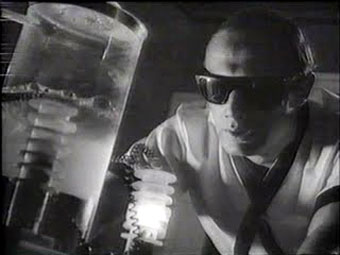 I finally got a working copy of The Curious Dr. Humpp from Netflix yesterday. Bad horror movie meets Skinemax really only begins to describe it. It’s a 70’s exploitation film from Argentina about a doctor who has his in-house monster kidnap nymphomaniacs and bring them to his mansion/laboratory to perform experiments on them, extracting fluids from them which he drinks to keep from turning into a monster himself. Strangest movie of all time? It’s in the running, for sure.

If you ever wondered where Rob Zombie gets his movie samples from, I recognized quite a few in this movie, and I would imagine the rest come from the rest of the Something Weird video line. Most notably “Use my body to keep you alive!”, “The effect is disappating at least ten minutes faster now. I’m going to need stronger doses, more frequently”, “Nonetheless, humans are more sexual than animals, you know it!”, and “That’s all you think about. Me give you all the sex you want, oh PLEASE!”.

Also entertaining were the special features. What did I learn from a woman making love to a paper skeleton? I think the more appropriate question is, “What DIDN’T I learn?”

Paul responded to my distress signal last night, bravely venturing into Hillcrest with his friend Anthony, whom I hadn’t met before. Anthony had lost his wallet so he had no identification. This meant no bars. We made our way first to Denny’s, but everything about that place is…well…Every time you eat at a Denny’s, you can rest assured that everyone else there is as miserable as you are. It was maybe 10 minutes of nonstop Office Space, Family Guy, and the Big Lebowski quotes going back and forth and then we decided we needed to get out of that place that so resembles the bleakest moments of the human soul.

We decided, of course, that the next stop would be a liquor store. Being Christmas day, of course none of them were open. We were not daunted by this and went to 7-11 to purchase our wares there. As soon as we bought our booze, we realized we really didn’t have a place to drink it. I certainly couldn’t bring them into my dad’s place, what with my dad sleeping on an air mattress on the kitchen floor, my grandparents sleeping on the bed upstairs, and the whole thing being so open and ‘airy’ that any sound made by anyone in ANY ONE of those rooms is amplified a billion times to the rest of the apartment. Balboa Park was out. Too many security guards, too many junkies. The athletic park didn’t have any place to park that didn’t scream out “Look! We’re here and drinking in public!” so we did the next thing that any resourceful person would do. We went to Jack in the Box to get cups so we could drink on the street with reckless abandon.

We swing into the drive-through and place our order–3 ninety-nine cent cheeseburgers and 3 large waters. Paul pulls up and we were all surprised to see a guy standing at the drive-through window. What the…? Did they start serving walk-ups at the drive-through window after the restaurant portion closed? Why does he look so angry? It becomes clear as he starts shouting at us. “You might as well just back up and leave because you’re not getting your food until I get a fucking burger. All I want is a fucking burger and they’re calling the cops on me, so it’s going to be a half an hour til the cops get here and then I’ll get a fucking burger and you’ll get your food.”

We looked at each other incredulously and after just a moment of debate about revving the engine to make it seem like we were going to run the guy down, Paul began to back out of the drive-through. He stopped at the menu and asked the worker inside if she knew she had a crazy guy waiting at her window. She replied she did, and that she had called the police, and that she was sorry, but we’d have to wait until he was gone. We pulled around the corner and lo and behold, the dipshit had left the drive-through. So Paul pulls back in, we get our large waters and burgers, and we pull away. Paul starts eating a buger, drives around for a minute, and we see the crazy guy walking away in the distance. Most people would let things be. Some evil people might slow down and flaunt their purchase. We slowed down, rolled down the window, and Anthony chucked Paul’s half-eaten burger out the window at the guy, shouting,”Here’s your fucking burger, asshole!” and sped away. Down a dead-end street.

This story will live on forever in the annals of our history as one of the funniest, most satisfying moments of all time.

God someone come get me PLEASE. My grandparents were passing around pictures of their NEW DRIVEWAY. If you loved me you’d drive down to Hillcrest and GET ME OUT OF HERE.