For a while I’d been planning on using END_OF_DOCUMENT_TOKEN_TO_BE_REPLACED 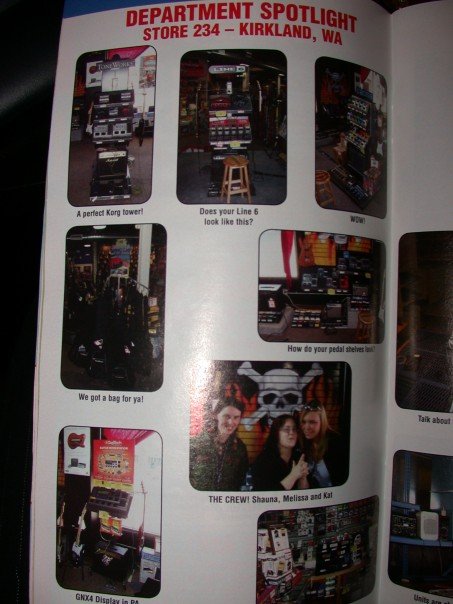 About a month ago, a corporate stooge came in and was completely blown away by the accessories department. He couldn’t believe what an amazing job we’d done merchandising our section, so he took a bunch of pictures and said it would be in August’s employees-only magazine, as a shining example that all other stores should follow. Yes, indeed. All other stores should follow our example, as in a matter of weeks, none of the people pictured will work there anymore. Apparently the more awesome you are at your wage-slave job, the more likely you’ll find another one that won’t make you work 7 day weeks around the holidays.

Employees have been dropping like flies recently, which means we’ve got a lot of new guys to train up. We’ve got a guy that I’m certain is the result of Ron Jeremy and The Beast’s DNA spliced together. But that’s if genesplicing scientists of the future had access to a time machine and deposited the horrible abomination 45 years in the past so as to throw the international scientific community off their trail. For those of you unfamiliar with The Beast, there was a guy in one of my classes who looked and acted like Comic Book Guy from the Simpsons, only about a million times more obnoxious. Every other sentence was a loud and flustered, “….SO AMAZING!!!!!!!!” or a dour pronunciation of “Worst….anime……ever.” As I was the only female in my Game History class, I was quite popular with guys like The Beast, who’d never seen a living, breathing girl before. However, because I am/was a nice girl, he didn’t realize at first because I didn’t recoil in revulsion that I wasn’t like the girls in porno, and I don’t just hand out blow jobs to whomever asks. After threatening to kick his ass, I made him realize his error.

This new guy has mannerisms just like The Beast. He walks around, loudly proclaiming “….SO AMAZING!!” It’s eerie, and makes me a little more glad I’m leaving soon, so I don’t have to threaten to kick some more undersocialized ass.

At GC we’ve got this thing called ‘floor deal’ slips. Basically, pretty much any sale over $200 (or anything with a serial number) is a ‘floor deal’ and the money, instead of going in the register, gets noted on a slip and stuck in the salesman’s pocket. What the benefit is of doing that, exactly, I haven’t figured out….but there must be SOME reason for it.

Regardless, a lot of salesmen were using the backs of the slips to jot notes–phone numbers, etc, and management apparently didn’t like to see us waste paper, so they printed a bunch of GC slogans on the backs of them so that we wouldn’t have a spot to write anymore. I decided that today was arts and crafts day, and rearranged the slips to say things that I felt were more truly in line with GC culture. Strangely enough, the definitions underneath seem to fit well with EITHER version.