I bought some keyboard benches today from work. For a penny. Actually, I bought four of them. So for less than a nickel, I’ve got seats for people who visit my apartment.

Someone in the keyboard department had mentioned a week or so ago that those particular benches were marked down to a penny (from the 69.99 we normally sell them at). Today I found a nickel on the ground and decided the gods themselves must want me to buy furniture. I set up the sales ticket, and called over a manager to approve the deal. I then immediately stacked up my boxes and brought them out to my car.

A few other employees witnessed my great find, went back to purchase benches for themselves and THEIR apartments, and approximately 30 seconds later, the angry scottsman came out of his cave, angry INDEED.

“Melissa, who are you selling those benches to?”

“…I’m not selling them to anyone. I bought them for myself.”

“Those benches are not for sale! They’re for salesmen to throw in when they sell a keyboard!”

“If they’re not for sale, why are they out and tagged on the sales floor? I bought those fair and square, and they’re out of the store. They belong to me now.”

“Fair and square? Who did you buy them from? Who are you supposed to get employee purchases from?”

“Any assistant manager or above.”

“No, you’re supposed to go through ME.”

“Then you might want to inform your assistant managers and sales staff of that fact.”

He walks off in a huff, and approaches me again in my department five minutes later.

“Look, the cost on those is likely not a penny. The cost listed in the computer on anything is not the REAL cost. We could be losing money on this!”

“Yeah, but it’s not a promo price. I didn’t buy the benches at our ‘cost’. I bought them at the price that pops up when you scan them into the register. It’s the price that any customer off the street could come in and purchase it at. What’s the difference between me doing it and a customer doing it? It’s not like I purchased every single bench in the store, and was planning to re-sell them on ebay. You still have plenty of benches left–you just have four less of them now.”

“I need you to bring those back.”

He walked off again, madder than I’ve ever seen him.

I’m not bringing the benches back. He’ll have to pry that four cent’s worth of furniture from my cold, dead fingers. 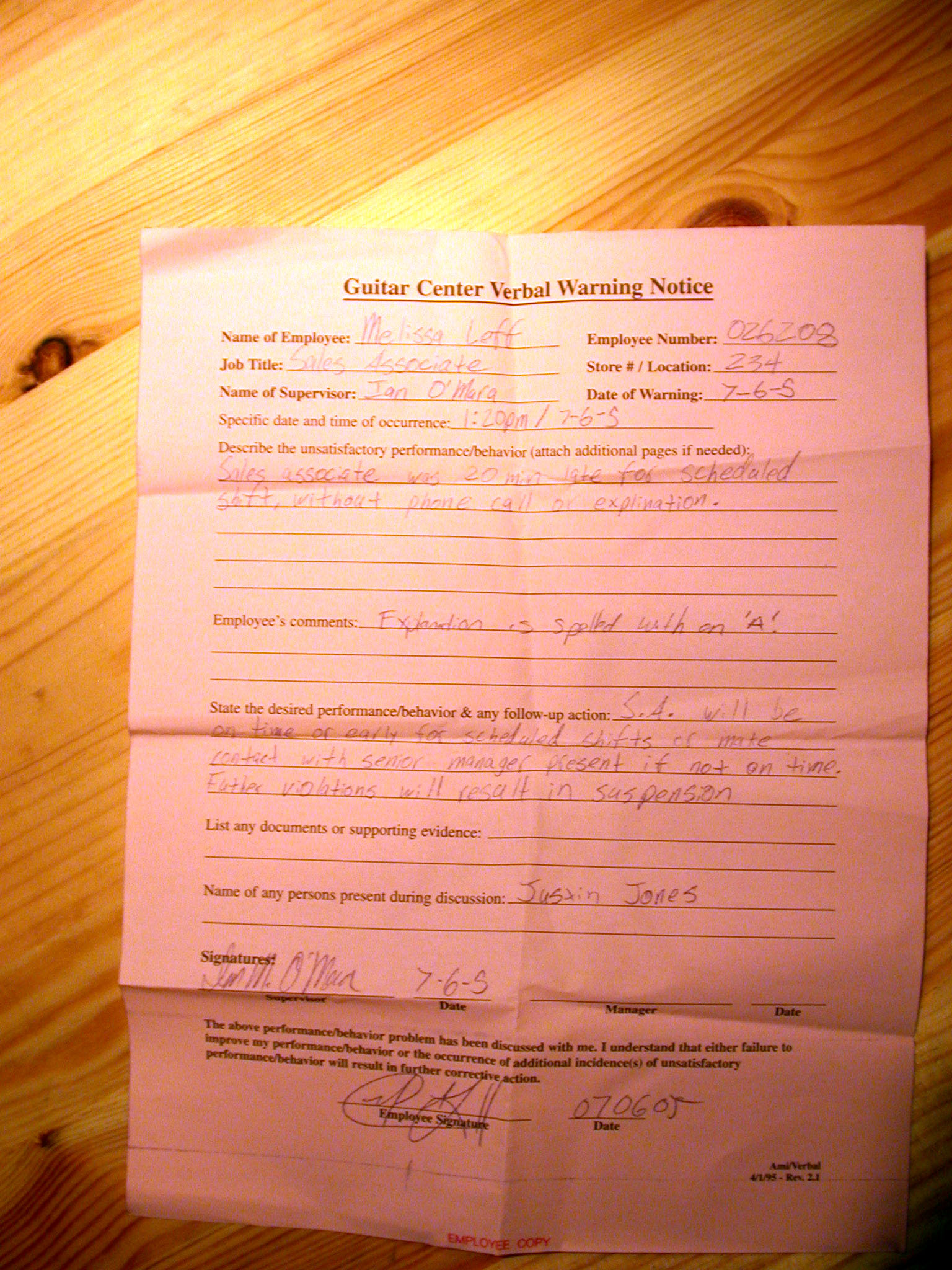 Due to a combination of traffic and not being able to find my car keys, I was late to work today. All that happens in the beginning of one’s shift is that a manager goes ‘blah de blibbedy blah’ about shit that no one cares about–so I didn’t miss much. One of the assistant managers, who COULD be cool if he didn’t have his head all the way up corporate’s ass, decided it was high time he taught me a lesson about personal responsibility. He’s since been too embarrassed to look at or talk to me all day. HAR HAR.

Yeah, maybe SOME DAY I’ll regret this, but it’s not very high on Mellzah’s scale of ‘likely to happen’.
The line about suspension slays me. C’mon! Suspend me! Give me a three day weekend!