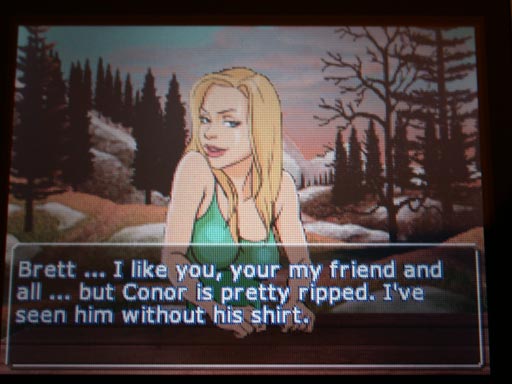 I’m having a bit of difficulty kicking this cold..I’ve had it for a week now and it shows no signs of getting better–rather, I’ve had to take yesterday and today off of work because I felt like such utter ass. When I go into work tomorrow, I am going to force GC to let me sign up for insurance, because I think I need to go to a doctor. My cough is starting to sound like a death rattle, which is some exciting stuff!

I picked up a copy of ‘Sprung’ for the DS on the cheap, and played through it in one evening. Holy CRAP that game is terrible. Aside from one liners such as, “You keep flapping your gums and you’re gonna make the yeast in my anger loaf rise,” the game looks and plays exactly like an episode of Elimidate. Everybody hooks up with everybody else, the guys give each other high-fives about it, and the girls call each other fat whores. However, if this has ANY application in real life, apparently it’s not all that hard to get into girls’ pants. I don’t know what any of you guys are complaining about. It’s just a little ‘hey baby’, plus some ‘can I buy you a drink’, with a dash of ‘you look amazing’ for good measure. BOOM. You’re in for some hottub handjob action. The grammar is pretty stellar, too.

My mom called me this morning and said she was looking at activities and things for us to do while I’m in Vegas, and I asked her if she could find out if Penn and Teller would be doing any shows while we were there. As luck would have it, they were (something like the 2nd day of my vacation is their last show for a month..). So I’m going to be seeing Penn & Teller at the Rio ($75 tickets nonwithstanding. Thanks, mom!) I’m getting excited about going to Vegas–even though I lived so close before, I still have never been there. I’m not a gambler, the only money I’m intending on putting in slots is the money that’ll get me my free drinks. Carrie and I also plan on going into Cheetah’s–apparently they don’t allow unaccompanied ladies inside the building. But how could we not go see the place where one of the most craptacular films of all time, ‘Showgirls’, was shot? Also, the quote I found absolutely slays me: “If you can’t find one you like here, you’re obviously not serious about topless entertainment. On most weekends Cheetah’s features 500 girls in a 24-hour period.”

YOU’RE NOT SERIOUS ENOUGH ABOUT TOPLESS ENTERTAINMENT! How DARE YOU???!?