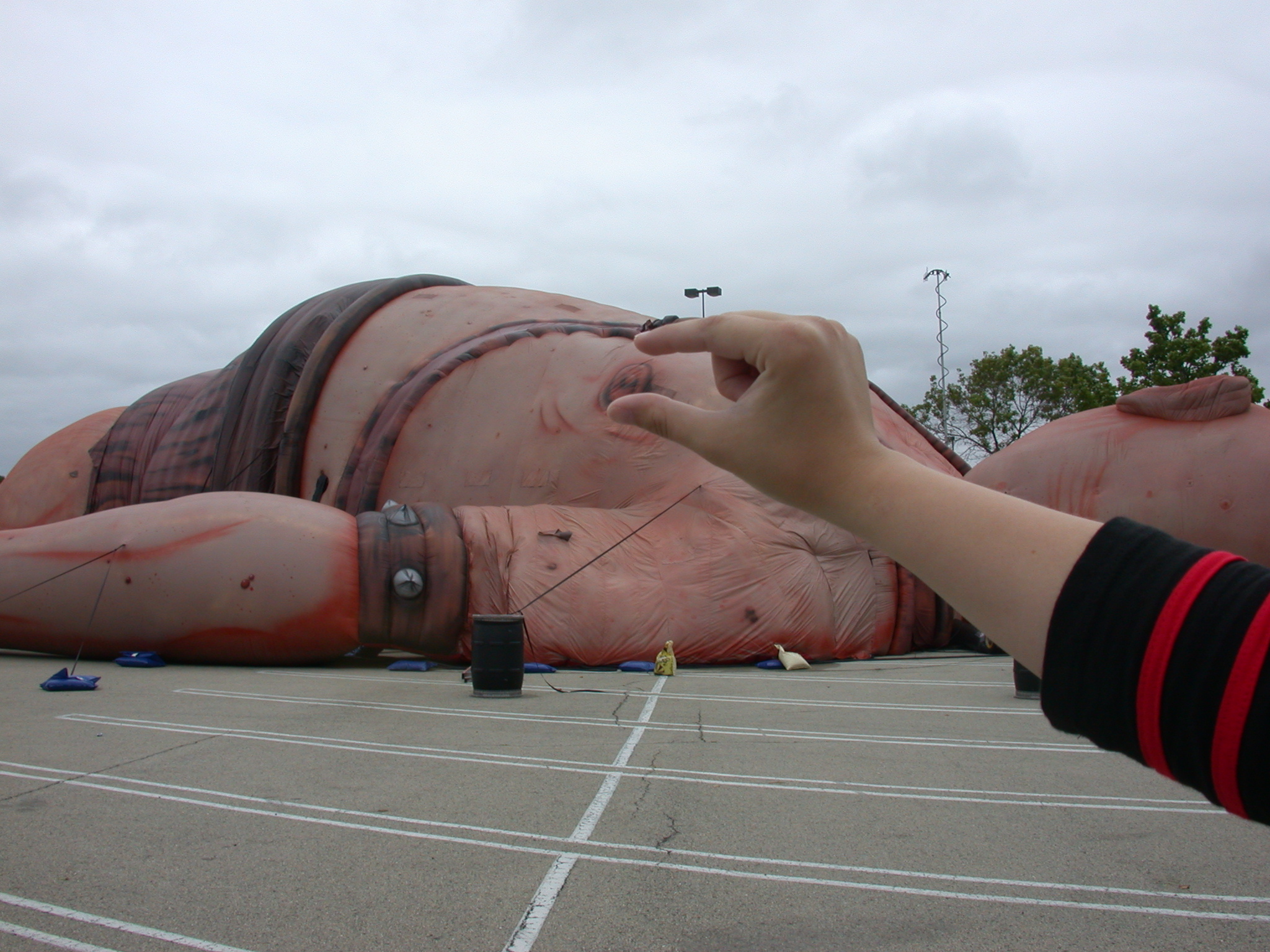 Today Lesley and I went to this thing called the Fallen Giant (http://www.fallengiant.com/) and went there with the understanding that it would either be very very cool, or very very lame. Lesley leaned toward lame. I, an occasional optimist, leaned toward cool. 95 WROCK was there doing promotions, and I finally got to ask them if it was true, if they only have five cds there that they play over and over and over again. Pressured, they spilled the beans–they only have ONE cd. And I believe it.

So it’s this huge inflatable giant that you walk around inside of–through the brain and the intestines and whatnot. So it could be lame AND educational, maybe? Only when we got there, there were people all dressed up in various tribal costumes–where do they fit in? Is it supposed to be scary?

A man in a tiki mask introduces himself as our tour guide, (I’m the leader of the group woooo!) leads us inside the brain and promptly shouts at me to try and make me scream. This, friends, is when I knew it was going to be lame, optimism be damned.

He leads us around for a little bit, another tribe-y sort of man tries to scare us, and then leads us around. None of the guys talk very loud, and even though Lesley was right behind me, I think I’m the only one who heard anything they were saying. One of the guides actually told me that “Yeah, you came at the wrong time, it’s better at night.” Thanks, buddy!

The people behind us were genuinely scared–I’m almost positive they’ve never left the house before. “We’re now going into the depths of his stomach…TERRIBLE HORRORS AWAIT YOU! ..and there is the exit. Have a nice day.”

Since the giant was such a letdown, we went to the park to play and behave like four-year-olds. Being a chilly day, the park was deserted. Lesley started spinning the spinny-thing around and hopped on. I made a valiant effort, but it was spinning too fast and flew head over heels into the hard-packed sand.

After my spill, Lesley made some sort of mention about how it looked like something that would win the grand prize on America’s Funniest Home Videos, I gave her the finger with my mind, stuck out my tongue, and hopped on the bouncy horse.

Lesley went over to the swings, and after a few minutes on the bouncy horse and a trip down the slide, I joined her. She then promptly jumped off to use the see-saw. I was swinging. Very high. Higher than I’d ever swung before. But Lesley wanted to use the see-saw, so I was going to be cool and JUMP off. Because everyone knows I’m cool, including me. Nevermind that this was how I broke my finger many years ago, attempting to perform a flying cannonball leap off of a tire swing. I’m cool. I pushed to get extra height, flew through the air, landed on my feet, before my ankle gave out and put me flat on my back. Oh yes, I’m cool.

All day on the radio it was ‘Gander Mountain’ this and ‘Gander Mountain’ that, so after work I went over to check it out. As I walked in the door, I was given a free gunlock. I have no idea what I might do with said gunlock, as I do not own, and have no intentions of ever purchasing a gun. And if I *did*, I wouldn’t want to lock it, I’d want to shoot people.

While there, I stopped and picked up a flyer for the ‘Bear Mountain Lodge’ where you hunt RAGING RUSSIAN BOAR! (And yet it’s BEAR Mountain…and you hunt BOAR…) This flyer is possibly one of the funniest things I’ve ever seen in my entire life. They used photoshop techniques to have place a WALL OF FIRE behind a RAGING RUSSIAN BOAR’S head– But wait! There’s more! Not satisfied with the amount of fire on the cover, they felt it was extra important to erase the boar’s eyes so that the WALL OF FIRE showed through–signifying that a terrifying hellbeast which needs to be shot resides at Bear Mountain. I have for you an excerpt (I swear I am not making this up):

“The word ‘Rampage’ can hardly describe the charge of the Russian Boar. When the hunt is on, time stands still, as the mighty beasts, one after another, will challenge you for ultimate supremacy. At the Mountain you set the stage and deliver the messenger that brings forth the kiss of death. Wheel guns are legal and fun as you unleash the most awesome power available. The monstrous boom and the flames of destruction are at your fingertips. Remember when you are up close and personal with a charging boar you may need every one of those precious jewels of death contained in your massive cylinders, as a raging boar can take a tremendous amount of firepower and KEEP ON COMING. Whatever weapon you choose this is ‘his’ campground. These treacherous beasts prowl the dark and shaded areas awaiting your arrival. It is up to you, as to when and where to unleash deadly force.”

I was seriously waiting for a line that said ‘When you hunt RAGING RUSSIAN BOAR, watch your penis extend to a FULL THREE METERS! p0WNz0r THAT BOAR AND BECOME MASTER OF YOUR DOMAIN!!!1~’

Maybe they need me to write their next booklet.

Last night after I got home from work I threw in some laundry and settled in to watch some Olympian athletes get some exercise and potentially get some exercise myself by shouting encouraging things like “SWIM FASTER, GODDAMNIT!”

They were currently showing the Men’s Gymnastics All Around, and mentioned that Paul Hamm was the best contender the US had ever had. I watched him through floor exercise, pommel horse, and the still rings. They kept breaking up the Men’s Gymnastics to show swimming and bicycling and all sorts of other activities, but I really wanted to see this young Wisconsinite succeed. So I kept watching…and watching… He goes up to vault, and this is where I really start pulling for him. “Cmon….you can do it…” and it is at that exact moment I should have known he was destined to fail. For, you see, I had chosen him as my Favorite. This is not something that is unique to sports–if I watch a beauty pageant, once they get down to the top five, I’ll choose my Favorite to win. She’ll get 5th place. Then I’ll choose again. She’ll get fourth place. At no time is my Favorite ever EVER allowed to win. And this is how I knew Paul Hamm was destined to fail. Surely enough, he runs, vaults, spins a few times in the air…and falls on his ass.

“oooooh, you can’t recover from a fall like that. What a disappointment for the US.”

I turned off the TV in disgust.

Lesley calls me this morning, we chat a little bit and she mentioned she saw Paul Hamm take gold last night.

“WHAT?? But I saw him fall on his keister! The commentators said it was ALL OVER for him!”

“Yeah, well he did really well on the last two events.”

I am utterly convinced, beyond a shadow of a doubt, that if I had not turned my television off, Hamm would have lost.

What would one even call this particular superpower?